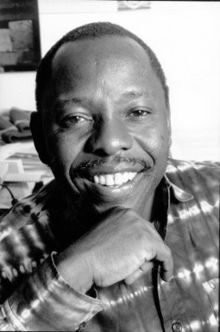 Kenule Beeson “Ken” Saro-Wiwa (10 October 1941 – 10 November 1995) was a Nigerian writer, television producer, environmental activist, and winner of the Right Livelihood Award and the Goldman Environmental Prize. Saro-Wiwa was a member of the Ogoni people, an ethnic minority in Nigeria whose homeland, Ogoniland, in the Niger Delta has been targeted for crude oil extraction since the 1950s and which has suffered extreme environmental damage from decades of indiscriminate petroleum waste dumping. Initially as spokesperson, and then as president, of the Movement for the Survival of the Ogoni People (MOSOP), Saro-Wiwa led a nonviolent campaign against environmental degradation of the land and waters of Ogoniland by the operations of the multinational petroleum industry, especially the Royal Dutch Shell company. He was also an outspoken critic of the Nigerian government, which he viewed as reluctant to enforce environmental regulations on the foreign petroleum companies operating in the area.

At the peak of his non-violent campaign, he was tried by a special military tribunal for allegedly masterminding the gruesome murder of Ogoni chiefs at a pro-government meeting, and hanged in 1995 by the military dictatorship of General Sani Abacha. His execution provoked international outrage and resulted in Nigeria’s suspension from the Commonwealth of Nations for over three years.

Born Kenule Tsaro-Wiwa, the son of Jim Wiwa, a forest ranger and his third wife, Widu. He changed his name to Saro-Wiwa after the Nigerian Civil war. His father’s home town is the village of Bori, Ogoniland whose residents speak the Khana dialect of Ogoni language. Saro-Wiwa spent his childhood in an Anglican home and eventually proved himself to be an excellent student; he received primary education at a Native Authority school in Bori, then attended secondary school at Government College Umuahia. A distinguished student, Saro-Wiwa was captain of the table tennis team and amassed school prizes in history and English. At Umuahia, he was the only student from Ogoni land but fellow students were mandated to speak English which made Saro-Wiwa feel Nigerian; he embraced the language as a useful way to communicate to a larger audience at home and abroad. On completion of secondary education, he obtained a scholarship to study English at the University of Ibadan. At Ibadan, he plunged into academic and cultural interests, he won departmental prizes in 1963 and 1965 and worked for a drama troupe. The traveling drama troupe performed in Kano, Benin Ilorin and Lagos and collaborated with the Nottingham Playhouse theatre group that included a young Judi Dench. He briefly became a teaching assistant at the University of Lagos and later at University of Nigeria, Nsukka. Saro-Wiwa was an African literature lecturer in Nsukka when the Civil war broke out, he supported the Federal Government and had to leave the region for his hometown of Bori. On his journey to Port-Harcourt, he witnessed the multitudes of refugees returning to the East, a scene he described as a “sorry sight to see”. Three days after his arrival, nearby Bonny was liberated by federal troops. He and his family then stayed in Bonny, he traveled back to Lagos and took a position at UNILAG which did not last long as he was called back to Bonny. 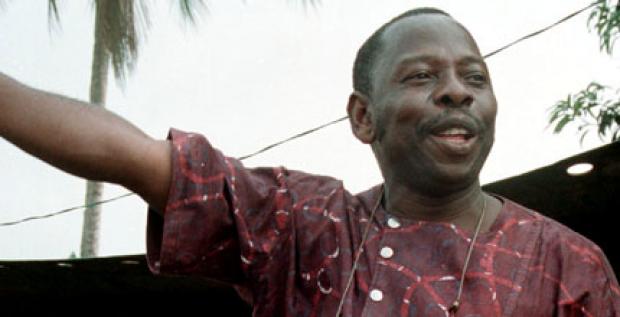 He called back to become the Civilian Administrator for the port city of Bonny in the Niger Delta and during the Nigerian Civil War positioned himself as an Ogoni leader dedicated to the Federal cause. He followed his job as an administrator with appointment as a commissioner in the old Rivers State. His best known novel, Sozaboy: A Novel in Rotten English, tells the story of a naive village boy recruited to the army during the Nigerian Civil War of 1967 to 1970, and intimates the political corruption and patronage in Nigeria’s military regime of the time. Saro-Wiwa’s war diaries, On a Darkling Plain, document his experience during the war. He was also a successful businessman and television producer. His satirical television series, Basi & Company, was wildly popular, with an estimated audience of 30 million.

In the early 1970s Saro-Wiwa served as the Regional Commissioner for Education in the Rivers State Cabinet, but was dismissed in 1973 because of his support for Ogoni autonomy. In the late 1970s, he established a number of successful business ventures in retail and real estate, and during the 1980s concentrated primarily on his writing, journalism and television production. In 1977, he became involved in the political arena running as the candidate to represent Ogoni in the Constituent Assembly. Saro-Wiwa lost the election in a narrow margin. It was during this time he had a fall out with his friend Edwards Kobani.

Saro-Wiwa’s works include TV, drama and prose writing. His earlier works from 1970s to 1980s are mostly satirical displays that portrays a counter-image of Nigerian society but his later writings were more inspired by political dimensions such as environmental and social justice than satire.

Transistor Radio, one of his best known plays was written for a revue during his university days at Ibadan but still resonated well with Nigerian society and was adapted into a television series. Some of his works drew inspiration from the play. In 1972, a radio version of the play was produced and in 1985, he produced, Basi and Company, a successful screen adaption of the play. Saro-Wiwa included the play in Four Farcical Plays and Basi and Company: Four Television Plays. Basi and company, an adaptation of Transistor Radioran on television from 1985 to 1990. A farcical comedy, the show chronicles city life and is anchored by the protagonist, Basi, a resourceful and street wise character looking for ways to achieve his goal of obtaining millions which always ends to become an illusive mission.

In 1985, the Biafran Civil War novel Sozaboy was published. The protagonist’s language was written in nonstandard English or what Saro-Wiwa called “Rotten English”, a hybrid language of pidgin English, standard English and broken English.

In 1990, Saro-Wiwa began devoting most of his time to human rights and environmental causes, particularly in Ogoniland. He was one of the earliest members of the Movement for the Survival of the Ogoni People (MOSOP), which advocated for the rights of the Ogoni people. The Ogoni Bill of Rights, written by MOSOP, set out the movement’s demands, including increased autonomy for the Ogoni people, a fair share of the proceeds of oil extraction, and remediation of environmental damage to Ogoni lands. In particular, MOSOP struggled against the degradation of Ogoni lands by Royal Dutch Shell.

In 1992, Saro-Wiwa was imprisoned for several months, without trial, by the Nigerian military government.

Saro-Wiwa was Vice Chair of the Unrepresented Nations and Peoples Organization (UNPO) General Assembly from 1993 to 1995.  UNPO is an international, nonviolent, and democratic organisation (of which MOSOP is a member). Its members are indigenous peoples, minorities, and unrecognised or occupied territories who have joined together to protect and promote their human and cultural rights, to preserve their environments and to find nonviolent solutions to conflicts which affect them.

In January 1993, MOSOP organised peaceful marches of around 300,000 Ogoni people – more than half of the Ogoni population – through four Ogoni urban centres, drawing international attention to their people’s plight. The same year the Nigerian government occupied the region militarily.

Saro-Wiwa was arrested again and detained by Nigerian authorities in June 1993 but was released after a month. On 21 May 1994 four Ogoni chiefs (all on the conservative side of a schism within MOSOP over strategy) were brutally murdered. Saro-Wiwa had been denied entry to Ogoniland on the day of the murders, but he was arrested and accused of incitement to them. He denied the charges but was imprisoned for over a year before being found guilty and sentenced to death by a specially convened tribunal. The same happened to eight other MOSOP leaders who, along with Saro-Wiwa, became known as the Ogoni Nine.

Some of the defendants’ lawyers resigned in protest against the alleged rigging of the trial by the Abacha regime. The resignations left the defendants to their own means against the tribunal, which continued to bring witnesses to testify against Saro-Wiwa and his peers. Many of these supposed witnesses later admitted that they had been bribed by the Nigerian government to support the criminal allegations. At least two witnesses who testified that Saro-Wiwa was involved in the murders of the Ogoni elders later recanted, stating that they had been bribed with money and offers of jobs with Shell to give false testimony, in the presence of Shell’s lawyer.

The trial was widely criticised by human rights organisations and, half a year later, Ken Saro-Wiwa received the Right Livelihood Award for his courage, as well as the Goldman Environmental Prize.

On 10 November 1995, Saro-Wiwa and the rest of the Ogoni Nine were killed by hanging by military personnel. They were buried in Port Harcourt Cemetery.

In his satirical piece Africa Kills Her Sun, first published in 1989, Saro-Wiwa in a resigned, melancholic mood foreshadowed his own execution. 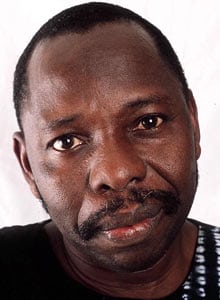 Beginning in 1996, the Center for Constitutional Rights (CCR), EarthRights International (ERI), Paul Hoffman of Schonbrun, DeSimone, Seplow, Harris & Hoffman and other human rights attorneys have brought a series of cases to hold Shell accountable for alleged human rights violations in Nigeria, including summary execution, crimes against humanity, torture, inhumane treatment and arbitrary arrest and detention. The lawsuits are brought against Royal Dutch Shell and Brian Anderson, the head of its Nigerian operation.

The cases were brought under the Alien Tort Statute, a 1978 statute giving non-US citizens the right to file suits in US courts for international human rights violations, and the Torture Victim Protection Act, which allows individuals to seek damages in the US for torture or extrajudicial killing, regardless of where the violations take place.

The United States District Court for the Southern District of New York set a trial date of June 2009. On 9 June 2009 Shell agreed to an out-of-court settlement of US$15.5 million to victims’ families. However, the company denied any liability for the deaths, stating that the payment was part of a reconciliation process. In a statement given after the settlement, Shell suggested that the money was being provided to the relatives of Saro-Wiwa and the eight other victims, to cover the legal costs of the case and also in recognition of the events that took place in the region.

Some of the funding is also expected to be used to set up a development trust for the Ogoni people, who inhabit the Niger Delta region of Nigeria. The settlement was made just days before the trial, which had been brought by Ken Saro-Wiwa’s son, was due to begin in New York.

Saro-Wiwa’s death provoked international outrage and the immediate suspension of Nigeria from the Commonwealth of Nations, as well as the calling back of many foreign diplomats for consultation. The United States and other countries considered imposing economic sanctions. Other tributes to him include:

A collection of handwritten letters by Ken Saro-Wiwa were donated to Maynooth University by Sister Majella McCarron, also in the collection are 27 poems, recordings of visits and meetings with family and friends after Saro-Wiwa’s death, a collection of photographs and other documents.

The letters are now in the Digital Repository of Ireland (DRI).

The Ken Saro-Wiwa Archive is housed in Special Collections at Maynooth University.

Saro-Wiwa and his wife Maria had five children, who grew up with their mother in the United Kingdom while their father remained in Nigeria. They include Ken Wiwa and Noo Saro-Wiwa, both journalists and writers, and Noo’s twin Zina Saro-Wiwa, a journalist and filmmaker. In addition, Saro-Wiwa had two daughters (Singto & Adele) with another woman. He also had another son, Kwame Saro-Wiwa, who was only 1 year old when his father was executed.