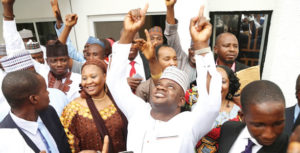 Hundreds of supporters of Kogi State Governor, Yahaya Bello, burst into wild jubilation on Tuesday in Abuja after the Supreme Court upheld the election of Bello as the governor of Kogi State.

The apex court’s judgment therefore ended the controversies created by the death of the Kogi State governorship candidate of the All Progressives Congress in the November 2015 poll, Prince Abubakar Audu, after the former governor had established a commanding lead over the then incumbent, Capt Idris Wada (retd.), of the Peoples Democratic Party.

The apex court, in unanimous judgments in four separate appeals, agreed that Bello was properly substituted to replace Audu as the candidate of the APC in the governorship election on November 21 and the supplementary poll held on December 5, 2015.

In the first appeal filed by a member of the House of Representatives and APC deputy governorship candidate, James Faleke, the court dismissed the case for lack of merit.

Justice Kudirat Kekere-Ekun, in the judgment, disagreed with arguments made by counsel for Faleke, Chief Wole Olanipekun (SAN), on Bello’s emergence as a replacement for Audu, but fixed Friday, September 30, 2016, to give reasons for the decision of the apex court.

In the judgment on the second appeal, filed by the immediate past governor of the state, Wada, delivered by Justice Sylvester Ngwuta, the court also dismissed the appeal for lacking in merit and substance.

The court equally refused to order a fresh governorship election in the state as canvassed by the appellant.

The Supreme Court held that Section 141 of the Electoral Act 2010, relied upon by the ex-governor to seek a fresh conduct of the election, was no longer a law in Nigeria, having been set aside in 2011 by a Federal High Court in a matter between the Labour Party, the Attorney General of the Federation and the Independent National Electoral Commission.

In two other appeals, filed by African Democratic Congress and LP, the apex court, in a similar way, dismissed them for lacking in merit.

While Justice John Okoro, who delivered judgment in the appeal filed by ADC, held that the appeal lacked merit, Justice Musa Mohammed, upheld the preliminary objection of Bello against the LP’s appeal and struck out the appeal on the ground of incompetence.

The apex court upheld the concurrent findings of the Court of Appeal delivered on August 4, 2016, and that of the state governorship Election Petitions Tribunal delivered on June 6, 2016.

The Supreme Court fixed September 30, 2016, as the date to give reasons for the four judgments.

Olanipekun, who stood for Faleke, had earlier in his oral submission, urged the court to invoke Section 187 of the constitution to declare his client the winner of the election on the combined effect of his joint ticket with the late Audu because the election had been technically concluded at the time Audu died.

He said INEC did not declare the election inconclusive following the death of Audu, adding that as of November 23, INEC said it was not aware that Audu was dead.

“We want to submit that the constitution is not subject to the nuances of anybody, including INEC; the commission doesn’t have any constitutional discretion to announce results. If it does, INEC will set the country on crisis,” he stated.

Wada, in his submission by Chris Uche (SAN), had urged the court to invoke Section 141 of the Electoral Act against Bello’s declaration as the winner of the election on the grounds that he (Bello) did not participate in the stages of the election.

According to him, the circumstances of the case had led to a legal conundrum, which led to the interpretation by the Supreme Court.

“Electoral votes are not inheritable commodities. There are nemeses in the judgment of the lower court. It was wrong for the first respondent to be returned. The political conundrum in Kogi State would have been avoided if INEC had called for fresh election for the people of the state to choose their governor instead of allowing a man, who didn’t have up to five per cent of the votes, to be declared governor.

“Yahaya Bello was a stranger and became an illegal occupant and that is the reason why he shouldn’t be there.”

Alex Izinyon (SAN), representing INEC, had said the issues at the lower courts were very narrow, adding that the appellant (Faleke) and the second respondent were members of the same political party.

“The declaration has not been made by INEC. So, how does the appellant (Faleke) get the source of his claim? If it is done so, there will be anarchy because everybody will declare himself elected.

“There should be no self-declaration, he wrote a letter to INEC. It is the party, APC that should be written to. We know what happened when somebody declared himself elected during the June 12, 1993 presidential election.

“I urge the court to dismiss the appeal because it lacks merit.”

In his submission, Joseph Daudu (SAN), representing Bello, adopted what he described as “the very eloquent argument of Izinyon for the first respondent (INEC).”

He said, “I humbly urge that the appeal (by Faleke) should be dismissed because it lacks merit. Declaring the appellant governor will lead to anarchy. The appellant has to rely on a document in which INEC has to declare somebody winner. There was no declaration. Section 192 of the constitution has not matured and cannot be invoked.

“As things stand, the appellant’s claim to governorship is inchoate. The appellant has not disputed why INEC declared the election inconclusive. I urge your Lordship to dismiss the appellant’s case for lacking in merit.”

Meanwhile, Bello said on Tuesday that the decision of the Supreme Court, affirming his election, “has long been settled in heaven.”

He also called on key political actors in Kogi State, including ex-governor Wada and Faleke, to join him in rebuilding the state.

Speaking on Tuesday with journalists at the Kogi State Governor’s Lodge, Asokoro in Abuja, the governor said he would take tough measures to restore the state to its former glory.

He said, “The decision of the Supreme Court has long been settled in heaven, the Supreme Court just affirmed it. I thank my great party, the All Progressives Congress, for giving me the opportunity to serve. I also thank President Muhammadu Buhari, the best President in the world, for being on the path of truth and equity. I will fulfil the great vision of late Abubakar Audu because his spirit is alive.

“I appreciate the Supreme Court for asserting its independence. I call on all Kogites, especially Idris Wada and James Faleke, to assist me in rebuilding Kogi State, which has bled enough since its creation 25 years ago. God has saddled me with the responsibility.

“Tough decisions will be taken to bring back the state to the right path. Please support me and I call on the restive ones to drop their violence because it will not take them anywhere. We should all join hands with the President to build Nigeria.’’

Bello said he would restructure the civil service because of the menace of ‘ghost’ workers.

Also, the APC has congratulated Bello on his victory at the Supreme Court.

The National Chairman of the party, Chief John Odigie-Oyegun, in his reaction to the judgment, told journalists at the party secretariat on Tuesday, that the party had sent its congratulation to the Kogi State governor.

He said, “We have congratulated the governor; we will soon issue a statement to that effect.”

Faleke, in his reaction, said he was satisfied that he and his team fought a good fight.

In a telephone interview with The PUNCH, Faleke said, “The Supreme Court has given its judgment. We are satisfied that we fought a good fight, and to the people of Kogi State, we are heroes of democracy because we did not abandon them in their time of need.”

Also, the Kogi State chapter of the Association of Local Governments of Nigeria expressed satisfaction with the judgment, describing it as a welcome development and a victory for the rule of law.

The state Chairman of ALGON, Taufiq Isa, said with the judgment, the Supreme Court had clarified who was the authentic governor of the state.