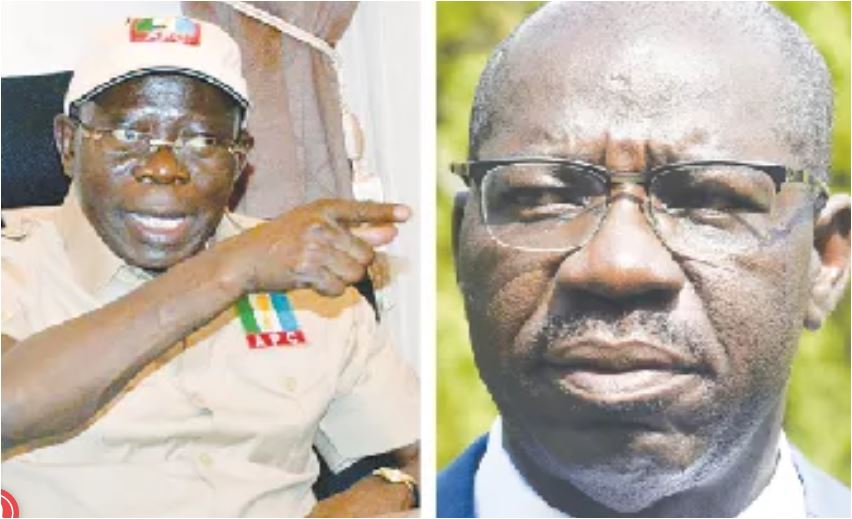 The impeachment of Edo Deputy Speaker, Hon Victor Edoror and the suspension of two other lawmakers considered loyalists of Comrade Adams Oshiomhole, the National Chairman of the APC, on Monday has brought to limelight the cold war between the former governor and his sucessor, PATRICK OCHOGA, writes

The hitherto Cold War between Governor Godwin Obaseki of Edo State and his predecessor, Comrade Oshiomhole, the National Chairman of the All Progressive Congress, APC was blown open after the Edo state house of assembly lawmakers loyal to the governor moved to impeached the deputy speaker, Hon Victor Edoror and two others on Monday.rior to the crisis that crept into the state legislative arms of government, there had been disputes between Oshiomhole and Obaseki over the latter’s leadership style and manner he has treated party leaders especially those who worked for his emergence in 2016. Many aggrieved members who were said to be unhappy with the governor have in droves defected from the APC, a party in power, on a daily basis to Peoples Democratic Party, PDP, a sign that portends grave danger for the soul of a party that once enjoyed the admiration of majority of people of the state.The lack of political patronage on the part of the governor for those who worked for his emergence, it was gathered is a big wedge between Oshiomhole and his godson, Obaseki, who according to an insider is battling to be his own man. Obaseki, it was gathered is allegedly working to dismantle the political structures of his predecessor, Comrade Adams Oshiomhole, by ensuring that his loyalists emerged at the just concluded party primaries, a development which has pitched the governor against Oshiomhole. Obaseki’s seeming fight with his predecessor may not be unconnected with speculation in political circle in the state that his second term bid is unsure and may be given a dose of what is termed the ‘Ambode’s treatment’ come 2020.

However, in a bid by Obaseki to fortify himself against any unforseen political attack or perceived gang up by aggrieved party members ahead of his second term ambition had preferred indirect primaries for aspirants which was overturned when the national chairman of the APC under the watch of Oshiomhole had it way when it directed the party to go for direct primaries.
The aftermath of the primaries like what was witnessed in many other APC states exposed the deep crack in the party when aspirants in Edo referred to as ‘establishment aspirants’ loyal to governor Obaseki were allegedly replaced by the national leadership of the APC. Source confided in Leadership that some of the shocking replacements by the leadership of the party was informed by the need to give tickets to popular candidates that can win election against the PDP. One of the contentious issues was the primary election in Akoko-Edo federal constituency between the Speaker, Hon Kabiru Adjoto, and Hon Peter Akpatason, the incumbent member representing the constituency.

The Speaker, who lost out in the conduct of the primaries to Hon Peter Akpatason is headed to court to retrieve what he believed was his mandate even against plea by Oshiomhole to accept the outcome of the primaries. Adjoto having been bruised following the outcome of the primaries moved with other aggrieved lawmakers who lost return tickets to the assembly where the deputy speaker, Hon.Victor Edoror, said to be eyeing the speaker’s seat was impeached. LEADERSHIP gathered that perceived Oshiomhole’s loyalists in the state assembly may face further sanction in the supremacy battle between Oshiomhole and Obaseki.

A party source in Benin said since the party opted for direct primaries, the fragile peace between Oshiomhole and Obaseki had been badly fractured because those perceived as Obaseki’s loyalists have lost out in the battle.  According to him, “What is happening in Edo right now is that Obaseki is fighting all Oshiomhole’s loyalists. He is trying to build his own political structures. For instance, look at a situation where Oshiomhole canvassed for direct primaries but the man he helped to become the governor is defying him and wants to have his way”. “Look at some of the candidates Obaseki picked, they cannot win election for APC. PDP is still very active in Edo State so we cannot afford to field people who are not popular. “Obaseki, as we know, is not a politician but a technocrat and yet he is playing politics by moving furiously against the people who installed him. Instead of allowing politicians to handle the situation, he has arrogated all powers to himself in defiance to Oshiomhole. “Because of his actions, most of the APC veterans are defecting en masse to PDP. You will recall that a chieftain of the party, Chief Charles Idahosa, months ago announced that he was quitting politics until he was persuaded by Oshiomhole to change his mind.

“What he is doing now is that systematically he is trying to erase all Oshiomhole’s legacies. For instance, Oshiomhole built a state of the art Central Hospital and furnished it with equipment. President Muhammadu Buhari came to commission the hospital but two years after, Obaseki has refused to open that hospital.” However, Chief Anselm Ojezua, the Edo State chairman of the party, denied the existence of any rift between Obaseki and his predecessor.

Despite the denial of any rift between the two, the commotion at the state assembly was a clear indication that the dice is cast and Obaseki is determined to fight back in the battle for the political structure of the state. It was gathered that before the Cold War between Obaseki and Oshiomhole came to the open, the governor had made several moves to douse the strained relationship with him and the national chairman of the party but to no avail.  Another party source said “what we are experiencing between Obaseki and Oshiomhole had long been expected. The governor as far as am concerned is being mislead by his handlers who are encouraging him to build his own structure.“You see, if you are conversant with the political events in the state, you will recall that Hon Isaiah Osifo, the former Chief of Staff to former governor Osunbor was busy building political structure for his boss against Anenih who made him the governor. Their plan was to retire Anenih and of course we all know what happened to former governor Osunbor.

“So, Obaseki needs to be careful and face governance and allow the politicians to do the politics. Those who today are wrongly advising Obaseki to go against the forces that made him governor will abandon him when the chips are down. They are doing that for their own selfish reasons”.  Meanwhile, LEADERSHIP gathered that following the impeachment of the deputy speaker, Monday, lawmakers loyal to Oshiomhole met to perfect plans to commence impeachment move against the speaker, Kabiru Adjoto.  There have been alleged plans by some APC chieftains known as Oshiomhole’ boys to impeach Speaker Adjoto and destabilize Obaseki’s administration.

A source said another argument adduced for the removal of Adjoto was to balance the power tripod in the state and allow a lawmaker from Edo Central emerge Speaker. The impeachment of the deputy speaker who is from Edo central will further infuriate the people of the district who have argued that the position of the Speaker should have been ceded to their senatorial district. With the development, it will be difficult for the APC as a party to campaign for votes from the masses in the area having been schemed out in the balance of political power. Adjoto, who of late has been unpopular with the people, is however unperturbed with heavy criticism following his refusal to respect the unwritten power sharing in the state. He is however said to enjoy the full backing of the governor.  Shortly after the deputy speaker was impeached, two other lawmakers said to be Oshiomhole’s loyalists; Hon Folly Ogedegbe and Hon Gani Audu were suspended for three months over alleged unruly behaviour. Hundreds of thugs invaded the assembly complex chanting pro-Adjoto’s song as the speaker moved from office to office to chase away perceived Oshiomhole’s lawmakers. Addressing the crowd, the speaker, Kabiru Adjotor, appreciated the thugs for coming to defend democracy,mutating that: “I will always be loyal to APC. The interest of the state is much greater than the interest of an individual in Abuja. As APC members, we are working hard to ensure president Buhari wins come 2019’’.“We, lawmakers are very happy with governor Obaseki. Obaseki is doing very well and that is why we will work to ensure victory for our party and President Muhammadu Buhari in the 2019 elections”.