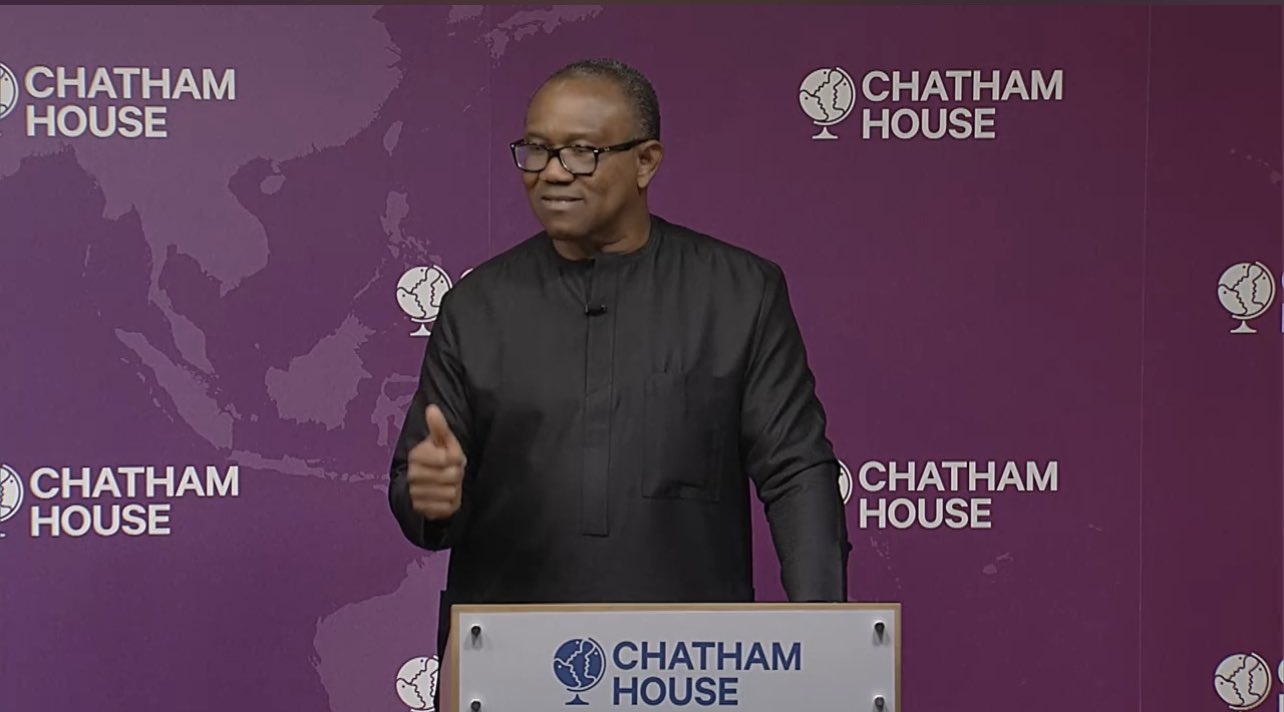 Nigerians and Britons alike witnessed the town hall deliberations held, Monday, where Insecurity, IPOB agitations and other matters like corruption and Nigeria’s failing economy where addressed by the Labour Party presidentially candidate, Peter Obi at Chatham House in London, the United Kingdom.

Speaking, during the meeting, he made known his plans for handling the Biafra agitation, which includes that of the outlawed secessionist group, IPOB, stating that he would dialogue with all agitators as there was nothing wrong in talking with them.

He described the agitations as a cumulative effect of a failure of leadership in the past years, which he assured Nigerians that he would solve with good governance.

His words: ‘When people start seeing justice, fairness, an inclusive government and doing the right thing, all those things will start reversing itself and that is what Datti and I are discussing’, he stated.

He spoke against the agitators, but however averred that their reasons for the agitation must be discovered because, apart from the IPOB, there was also the case of the Yoruba nation and some others. He insisted that all sorts of problems were bound to come up because, Nigeria is laden with a massive poverty rate where about 63% of the population lives in abject poverty. Aside from that, he countered, the Nigerian government had pointed accusing fingers to IPOB for being the reason for the attacks in the Southeast that has led to the endless killings and kidnapping cases in the region.

The leader of the secessionist group, Nnamdi Kanu still remains in detention and facing prosecution for treason in the midst of all these problems and IPOB still insists on having their own Republic, which would be carved out from the south East and part of the south south.

According to the submissions of Peter Obi at Chatham House, insecurity in Nigeria is partly caused by injustice, marginalization, exclusion and unfairness. Hear him: ‘As long as we start doing the right thing, as long as we start building an inclusive society; where people’s talent and hard work match their opportunities, you start seeing those things go down.’

He pointed out that Nigeria has a prevalent threat which leaves no room for the usual transactional leadership. Therefore, he said, ‘ It is either you are in Nigerian all you look for another country’.

As several questions were thrown to Peter Obi at Chatham House, he never avoided clearing the air on every issue brought up by his audience. He made it clear that Security would be his first assignment if elected, alluding to Anambra State under his watch as the governor, years ago when he brought maximum security to the state, adding that his administration would resonate the spirit of the Nigerian Military which aided in bringing security to Africa during peace missions.

The visit of the the Labour Party team to the UK attracted a massive crowd that not only welcomed  Peter Obi at Chatham House, but also listened to him speak about his plans for a better Nigeria. He is not the first candidate to visit the Chatham House. The All Progressives Congress (APC) flag bearer, Bola Tinubu was there in December .