TheCable Index analysed and reviewed daily media reports published in 2021 as well as data sourced from the Council on Foreign Relations.

TheCable Index discovered that an average of 14 Nigerians died daily in various violent attacks reported in the news media from January to December, 2021.

In the data analysed for this report, 1,024 violent attacks were reported to have taken place across the country, which have been compiled here by TheCable Index.

During the process of data extraction, TheCable Index excluded the killings carried out by security operatives and the death of suspected criminals like Boko Haram insurgents, bandits and gunmen.

HIGHLIGHTS OF THE ANALYSIS: 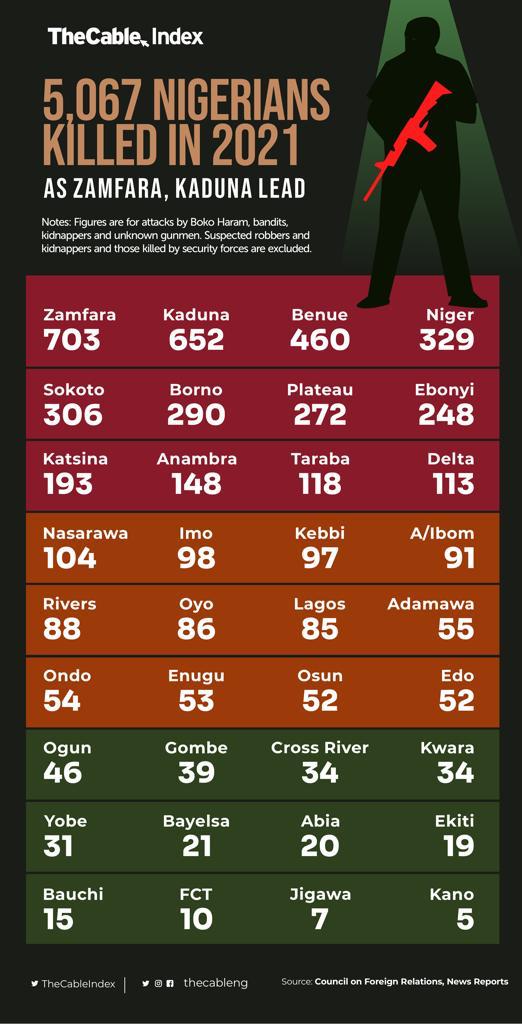 TheCable found out that Kano recorded the least number of reported deaths in the country with five deaths from three attacks.

Kano was closely followed by Jigawa with seven deaths, Abuja, the country’s capital, had 10 and Bauchi 15.

Zamfara had the highest number of reported deaths with 703 deaths, followed by Kaduna with 652 and Benue with 460.

In 2021, Zamfara and Kaduna witnessed a surge in the activities of bandits, which led to a high frequency of attacks in the two states.

TheCable observed that Zamfara, Kaduna, Benue and Niger accounted for 42 percent of the reported deaths in 2021.

A review of the reported deaths in 2021 in terms of geo-political zones shows that the south-west region had the least number of deaths with 342.

In previous data on security, the south-east was regarded as the safest part of the country but in 2021, the region witnessed a sharp rise in violent attacks, which stakeholders have attributed to the activities of secessionist groups.

The north-west region recorded the highest number of reported deaths with 1,963 deaths, followed by the north-central with 1,248 and the north-east with 548.

Below is a table showing killings in the six geo-political zones:

TheCable Index found out that an average of three attacks daily were reported from January to December with a total of 1,024 in 2021.

In terms of reported casualties, the highest number of deaths — 684 — was recorded in May, followed by June with 601.

Below is a table showing monthly record of attacks and casualties:

Zamfara recorded 703 reported casualties which were more than the casualty figure recorded by the six states in the south-west altogether.

According to a report by TheCable Index on the killings in 2020, 3,326 Nigerians were reported to have been killed in 735 attacks across the country. The average deaths in a day was nine.

Average killing in a day rose from nine in 2020 to 14 in 2021 as the year saw a surge in violent attacks across the country.

Communal clashes and cultist activities also claimed lives in many parts of the country in 2021.