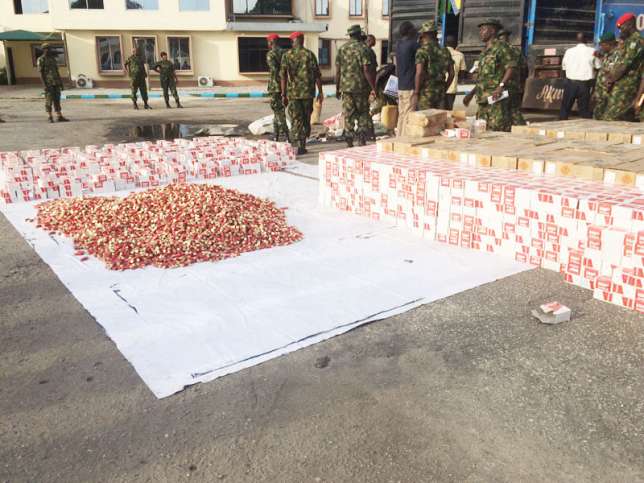 The 81 Division of the Nigerian Army on Thursday said it had intercepted three  trucks loaded with over 300, 000 live cartridges on the  Igbogila-Ilara area of  Ogun.

The General Officer Commanding (GOC) of the division, Maj.-Gen. Enobong Udoh, disclosed this to journalists at  a news conference at the division’s headquarters in Lagos.

The  GOC was represented by the 35 Artillery Brigade Commander, Brig.-Gen. Olusegun Olatunde.

“The 81 Division Nigerian Army in conjunction with some security agencies on May 30 at about 2:58 am.  intercepted three 5-ton trucks loaded with thousands of live cartridges,’’ he said.

“The live cartridges in boxes and cartons were carefully concealed in a wooden platform with metallic plates,” he added.

The GOC said that the drivers and their accomplices, on sighting the troops, abandoned their trucks and fled.

He said the team was on the trail of the fleeing drivers, their collaborators  as well as  sponsors.

The GOC, who said the interception  followed  a tip off received from well meaning Nigerians,  thanked residents  of Lagos and Ogun for their continued cooperation.

He urged them to always give timely information,  pledging  not to relent until the area was rid of   cultism, smuggling, vandalism and other violent criminal activities.

Udoh further  enjoined members of the public to continue to  call the dedicated  numbers  released to the  public   or the  nearest military barrack  to give  useful information.