The structure, which was being developed by Fourscore Homes, caved in on Monday, November 1.

The photo, taken a few days before the incident, showed the building still standing — but evidently tilted.

TheCable understands that the picture was taken by a resident of the area who expressed fears that the building might collapse. 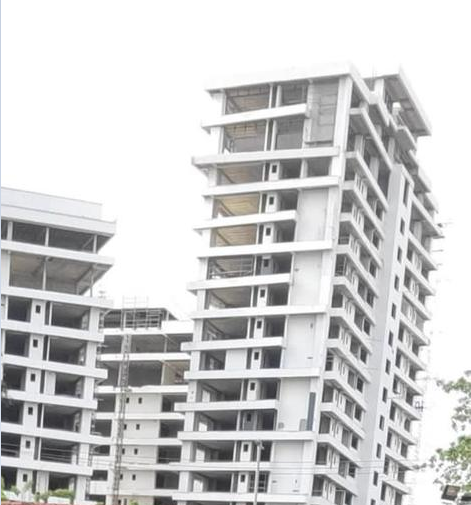 The now-collapsed Ikoyi building was tilting days before the tragedy

Femi Osibona, owner of Fourscore Homes, is one of the 45 persons who have so far been confirmed dead.

In the wake of the incident, Obafemi Hamzat, deputy governor of Lagos state, had said construction at the collapsed building was once stopped after it failed a structural integrity test.

The deputy governor said the building was sealed “because our agency came in to do structural tests and saw some anomalies”.

Subsequently, a video surfaced online showing how Osibona, aided by security operatives, resisted the sealing off of the property.

In the two-minute video clip, dated 2020, a group of men, who appeared to be officials of the Lagos State Building Control Agency (LASBCA), insisted on sealing off the building — but they were repelled.

Babajide Sanwo-Olu, governor of Lagos, has since inaugurated a tribunal to probe the collapse of the high-rise.

The governor gave the tribunal a 30-day deadline to submit the report of its investigation.

During a visit to the site of the building collapse, the governor had said there is enough blame to go around.

“This an event that could be described clearly as a national disaster. Mistakes were made from all angles,” Sanwo-Olu said.

The governor had also asked Gbolahan Oki, the general manager of LASBCA, to embark on an indefinite suspension over the incident.

On Wednesday, Gbenga Omotoso, Lagos commissioner for information and strategy, said the state has not ordered the demolition of the remaining two structures.

The commissioner said an integrity test is yet to be conducted on the two buildings.

“The panel of inquiry instituted into the collapse of the building has continued to sit, and an integrity test is yet to be conducted on the two buildings. It is, therefore, wrong to assert or speculate that the buildings will be demolished,” he said.

Meanwhile, the senate has asked the National Emergency Management Agency (NEMA) to provide support to survivors of the building collapse.