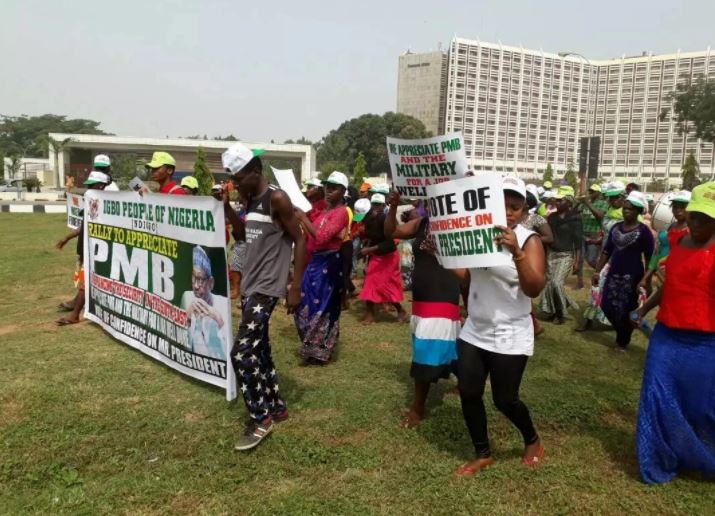 Some protesters of Igbo extraction have marched to the Presidential Villa 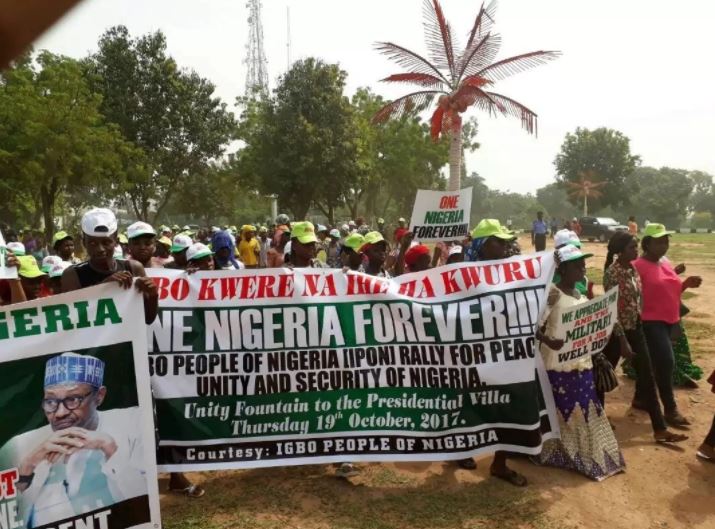 The protesters in their scores convened at the Unity Fountain in Abuja before heading to the Presidential Villa.

The protesters under the aegis Igbo People of Nigeria (IPON) said they appreciate President Buhari and the Nigerian army for the successful completion of the Operation Python Dance in the southeast region.

The IPON said the exercise by the Nigerian army has helped maintain peace and unity in the southeast region.

The protesters led by IPON’s national coordinator, Uche Chegwo, said the Igbo people will forever be grateful to President Buhari and the Nigerian army.

Chegwo said: “Like other patriotic persons from the other ethnic groups, members of IPON have strong faith in the unity of Nigeria and a strong belief that we are stronger together and that we stand to gain more as one strong, united and indivisible entity as opposed to being fragmented into little statelets and micro-nations that are unable to take on the corporate vampires of the world.” 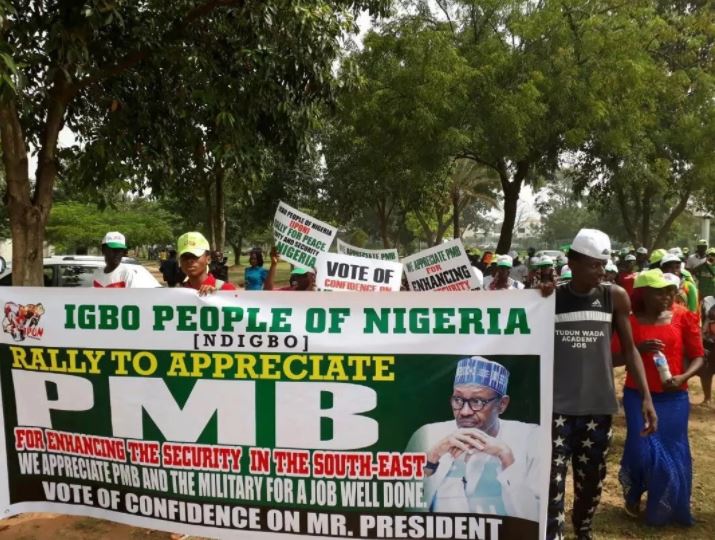 He said: “These merchants of hate have strive to create the impression that the only presence the Federal Government have in Igboland is destructive even as they wrongly cast the Operation Python Dance II by the Nigerian army as of such negative developments. Mr President, we of Igbo People for Nigeria want to report differently.

“It took the intervention of the Nigerian Army through its Operation Python Dance in 2016 to rid Igboland of kidnappers and bandits for many of us to again dare setting foot on our ancestral land after several years for fear of being robbed, abducted or killed by hoodlums.

Prior to your administration, a lot of our sons and daughters travel all the way from abroad and stay in Lagos and Abuja to celebrate the Yuletide without daring to set foot on the soil of our towns and villages. Operation Python Dance (I) changed that last year as we again breathed fresh air in places of our birth.”

He further urged the president to listen beyond the propaganda of the IPOB and heed to the genuine demands of the Igbo people.

“This will also secure the region from secessionists that are attempting to set up a Boko Haram-styled enclave there.

“Your excellency is further appealed to not to forget the promises made to our leaders that you have met with as we see the fulfillment of these promises going a long way to dismiss the lies that terrorists and secessionists are telling to the people,” Chegwo said.

NAIJ.com earlier reported that a group, the Biafra Nations Youth League said the activities for referendum would begin on November 6, across the state in the southeast region.

The group said the date was chosen to mark the anniversary of late Philip Effiong, the vice president and second second president to the now defunct Republic of Biafra.

BNYL also bashed the presiding judge in the Nnamdi Kanu trial for threatening to withdraw from the case; as he stressed that the judge had a duty to find out where the IPOB leader was being held.