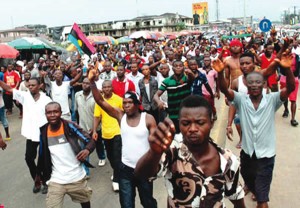 A telecommunication maintenance engineer, David Nwawuisi, has revealed that he got an initial payment of N150,000 to install a Radio Biafra transmitter on an MTN mast in Ngwo, Enugu State.

The 29-year-old, who was on the payroll of Ericsson, the firm managing mast sites for MTN, revealed this in a statement which he made to the Department of State Services on July 27, 2015.

Nwawuisi, who disclosed that he was managing 45 MTN sites for Ericsson, said the Radio Biafra transmitter had operated for three months on MTN mast before it was discovered and his subsequent arrest by the DSS on July 15, 2015.

Nwawuisi, who obtained a B.Sc degree in Biochemistry from the Enugu State University of Science and Technology in 2010, said he was being paid N73,000 plus per month by Ericsson.

He stated that it was the same amount he was being paid as a trainee when he joined the company as a trainee in 2014.

He narrated how he was contacted by one Chidiebere Onwudiwe, whom the Federal Government said was at large, and one Obioma, to seal the deal for the installation of the transmitter at the mast site.

Nwawuisi stated, “I came to know about Chidiebere and Obioma one day the security woman called me to tell me that that they will like to install a radio ( transmitter) on one of my sites at Ngwo in Enugu State and I told them that I don’t know who they are that if they can make out time so that we can see face to face because I don’t know them and that was in May.

“So the next day, they called me. I was working in one of my sites at St. Michael Catholic Church Asata in Enugu State. I asked them to come down to that site and that was the place I saw them for the first time and they introduced themselves as Chidiebere and Obioma. They also asked for my name and I said David. They also asked for my native name and I said Chukwugozie and from there Chidiebere started saying that the radio (transmitter) they are asking for my permission to install in my site is to help them educate our people (Igbo) and let them know their brothers and where they come from….

“They called me again to remind me of that and that was when I told them ok and we agreed that they are going to be paying N25,000 only per month which they paid six months upfront. N75,000 cash was given to me that day they came for the installation and out of that I gave N5,000 to the security woman. The balance was paid into my account at Ecobank after the First Bank (account) I gave to Obioma failed to accept the payment.

“The payment of the balance was done two weeks after the installation of the radio (transmitter). On three different occasions, Chidiebere and Obioma called me to do some maintenance on the radio (transmitter). I gave them access into the site and left and when they finished, the security woman informed me that they are through and I came and locked the site.

“The items Chidiebere came (with) were an electronic that looks like a decoder and a DSTV dish which was installed on the fence. The other items were installed inside the MTN site shelter. The equipment has been there for three months and on July 15 the MTN staff went to the site and called me from the site and asked me what the equipment is. The name of the MTN staff is Mr. John Ibekwe. When he was calling, I couldn’t get what he was asking due to the environment because I was driving and when I parked, I called the security woman to ask her and she told me that is the equipment that Chidiebere and Obioma installed that his asking of.

“I called back the MTN man to tell him what the equipment is for, that is a Radio Biafra (transmitter) that was installed by Chidiebere and Obioma. I told him that I will like to see him which he asked be to come to Shoprite and I came and after I was taken to the MTN office by the MTN security patrol team. From the office, after telling them how the equipment came about and how I got to know about Chidiebere, I was taken to Enugu DSS office.” (sic)

He stated that the MTN thereafter uninstalled the Radio Biafra transmitter.

He added that the last time he spoke with Chidiebere on the telephone was when he was at the DSS office in Enugu.

The Federal Director of Public Prosecutions, Mr. Mohammed Diri, who signed the fresh charges, the case summary and other processes accompanying them on behalf of the government, alleged that Nwawuisi agreed to install the transmitters “and did install IPOB radio transmitters on MTN masts for a consideration.”

The prosecution alleged that the transmitters were smuggled into Nigeria by the leader of the Indigenous People of Biafra, Mr. Nnamdi Kanu, and were discovered during a search in Madubugwu’s residence.

The Federal Government had charged Nwawuisi and Benjamin Madubugwu along with the founder of Radio Biafra and Kanu, with treason and other related offences including management and assisting in the management of an unlawful society (IPOB).

The accused persons were charged with six counts before the Federal High Court in Abuja but have yet to be arraigned.