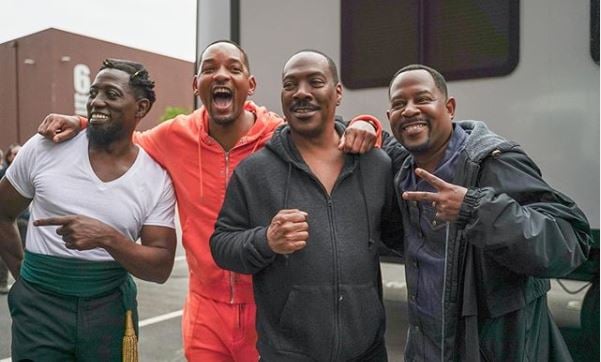 When Will Smith, US actor and rapper, shared his now-viral photo with Eddie Murphy, Martin Lawrence and Wesley Snipes, many had thought their meeting was a one-off.

It however, turns out the iconic photo of the acting legends was orchestrated by the ‘Fresh Prince of Bel-Air’ star.

At first, Smith appeared to have downplayed the picture when he first posted it online on Tuesday with a seemingly drab caption.

“Nothing to see here…,” he had captioned the photo, which was taken at the premises of Tyler Perry’s studios in Atlanta.

But on Friday, the award-winning movie star dropped a video revealing how he and Martin Lawrence, his ‘Bad Boy For Life’ co-star, stumbled upon Eddie Murphy and Wesley Snipes, ‘Coming to America’ actors, at the studios — where the actors are presently working on the production of their different movies.

Smith and Lawrence had gone to Tyler Perry Studios to complete the scenes for his ‘Bad Boys 3’ movie when they bumped into Murphy and Snipes while working on ‘Coming to America 2’.

The four actors decided to pose for the iconic picture in which they were all seen brimming with smiles — suggesting just how much the moment meant to them.

“You can’t put Bad Boys 3 next to Coming to America 2 at at Tyler Perry Studios and expect us to get ANY work done,” Smith wrote.

“Eddie, come out here now!” Smith said in the video, in his attempt to bring the legendary actors together for a group picture.

“You can’t hide!. We had to come see you. Gotta come and kiss the ring. Come pay homage. It’s hard to beat this. This right there, that’s iconicism.”