Life looked bright and promising for Olajuwon Julius, 30, when he sat for the Unified Tertiary Matriculation Examination (UTME), a prerequisite test to getting admitted into any Nigerian tertiary school.

Julius did well. He got 265 in UTME and topped Obafemi Awolowo University (OAU)’s post-UTME examination, acing 320 out of 400 questions.

He got admitted into the faculty of law in 2015, and based on his calculation, he hoped to graduate before the end of 2020, and start preparation for Law School.

Julius’ dart would have hit the right spot, but he started getting weary when the session he was to resume in August 2015 didn’t start until a year later in August 2016. This was based on the institution’s academic staff union taking their unusually long holiday and other issues that disrupted the academic calendar of the school.

After his resumption, Julius had barely spent three weeks on campus before the school’s branch of the Academic Staff Union of Universities (ASUU) downed tools over their opposition to the appointment of the new vice-chancellor.

Months later, after the institution’s governing body had been reshuffled, the school was reopened with an acting vice-chancellor in charge. That same year, ASUU embarked on a one-week warning strike.

“In 2016, I could remember vividly well; I couldn’t spend months in OAU campus. I was sent home with my colleagues. The strike lasted for months. After spending so many months at home due to the long holiday OAU lecturers embarked on,” Julius recounted.

Exactly a year after Julius resumed as a fresh student, ASUU announced an indefinite strike, citing the federal government’s unfulfilled implementation of the 2009 agreement and 2013 memorandum of understanding (MoU).

Again in November 2018, ASUU embarked on another strike for three months and six days. The industrial action was eventually suspended on February 7, 2019. By this time, Julius was in the first semester of 400 level. 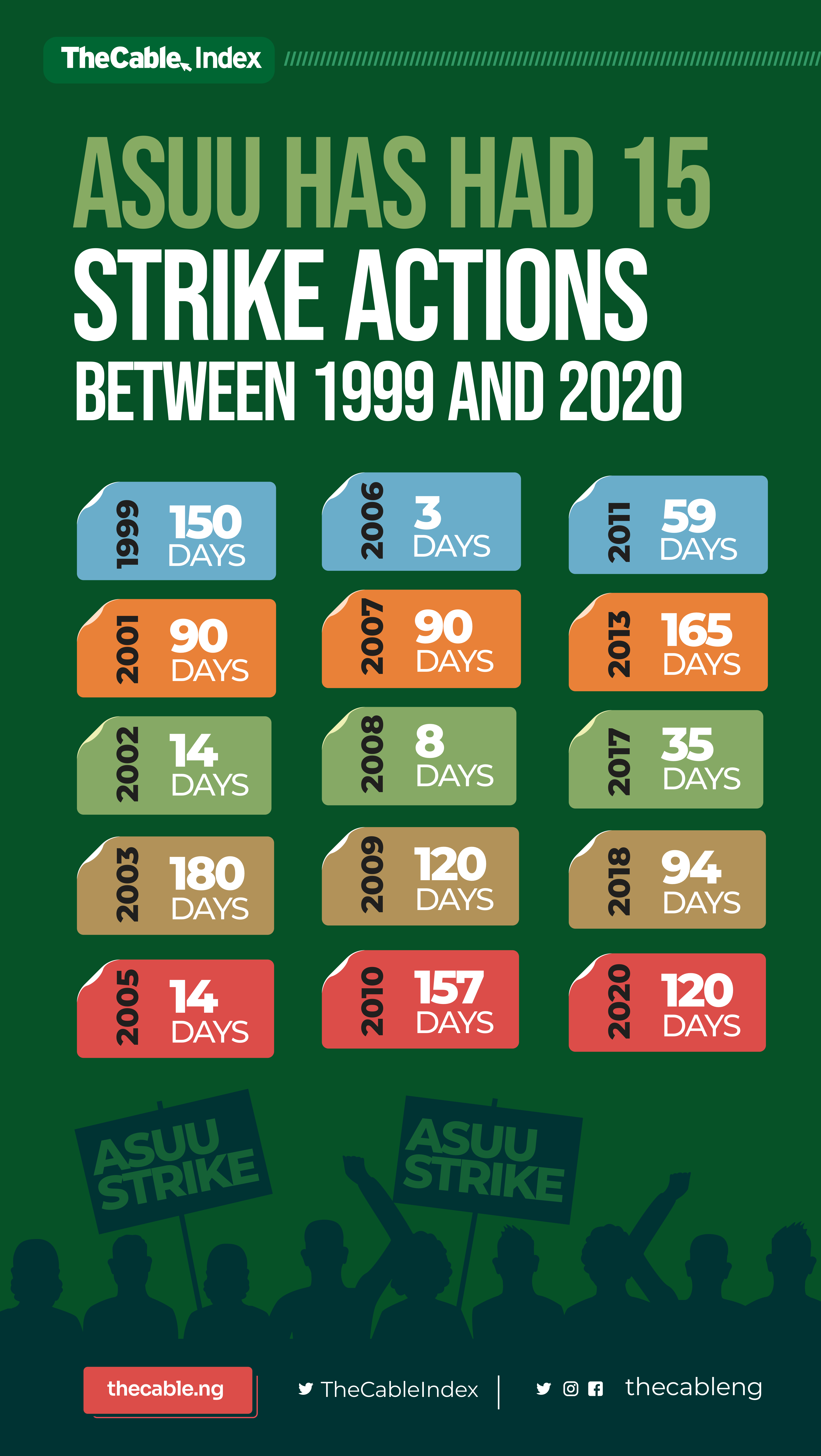 At the time, Julius’ high school colleagues whose parents could afford expensive private school tuition had either graduated or were already in Law School.

But he was only just resuming his final year at the OAU faculty of law. To his utter chagrin, the lecturers welcomed the students with: ‘no pay, no work’, ‘this will be the mother of all strikes’, and ‘we won’t look back’.

On March 9, 2020, ASUU declared a two-week warning strike, and when it elapsed, the union embarked on an indefinite industrial action on March 23, 2020. The strike did not end until December 23, 2020.

Julius returned to campus on February 8, 2021, and eventually ‘signed out’ as an undergraduate in December 2021, but as at the time of filing this report, he is yet to be certified as a graduate of OAU — and that may not happen anytime soon as another industrial strike action has commenced.

He is currently drafting his final year project and there is no telling when his project supervisor will see to his drafts. TheCable understands that the OAU branch of ASUU grounded academic activities since January 24, 2022, over unpaid allowance by the university authority.

Before Julius got admission to study law at OAU, he had bagged distinction in mass communication at Moshood Abiola Polytechnic (MAPOLY), where he was also made to spend more years than expected due to strike actions.

“This is 2022, I am still trying to finish my LL.B project and my long academic years are going to be put to a standstill again,” he lamented.

“It’s a sad experience. I have been in higher institutions for a long time. I could remember how I suffered a lot of setbacks due to the Academic Staff Union Of Poly (ASUP) strike. Today, it’s no longer ASUP, it’s now ASUU. When will my parents eat the fruits of their labour? Do I even still have what it takes to meet up the requirements of the labour market?

“I am broken. The system has shattered my hopes and ambitions. I am a product of a failed system. I hope there’s hope one day and I hope the day comes soon”.

According to TheCable Index — the data and research arm of TheCable — since 1999 when the country returned to democratic dispensation, ASUU has gone on strike for a total of 49 months and seven days — and this amounts to four years, one month and one week.

In an undisruptive academic setting, the total days ASUU has spent on strike actions to press home their demands can earn a student a bachelor’s degree and certify a polytechnic student with combined honours of national diploma (ND) and higher national diploma (HND).

For people like Julius, that is several years wasted, and as he is just preparing to delve into the labour market at the age of 30, he is not particularly confident of his chances of getting a “good job”.

In the slew of requirements most companies put out when calling for applications, age range often stands out.

According to Emmanuel Faith, team lead, people and culture, Cowrywise, most companies recruit people who are quite agile and in their 20s — an age bracket Julius does not fit into — because of long-term workforce planning.

“Companies do have various reasons to add age limit for entry-level roles. It is a way to reduce/sift the number of applications, especially since the supply for labour (talents) at entry-level is much greater than the demand for talents,” she said.

“Also, most people are quite agile and active in their early 20s, also if you are looking at a long-term workforce planning (or succession planning) strategy, having young talents fit into that purpose.”

In a bid to be proactive and prepared for any possible eventuality, undergraduates in public tertiary institutions are starting to join the virtual/remote labour force, doing part-time gigs and kicking off their professional careers right from the university.

Princess Didi Essang, a 300-level pharmacy student of the University of Lagos, works part-time as a social media manager and content strategist — a field she got into in 2020 during the 270 days of ASUU strike.

Essang, who will probably graduate in the 2025/2026 academic session as against 2023, explained that starting her career from campus has been one of her best decisions so far.

She said: “I think the major change for me was when ASUU had a nine-month strike which coincided with the COVID-19 pandemic lockdown in 2020 and we began to see that we cannot rely on the federal government, we cannot rely on ASUU if we really want to achieve something after school.

“I looked at my age and how things might go awry for me if I don’t act fast. Then, I decided to go into the field of content writing, content strategy and social media management for organisations.”

She added that her peers in other faculties, especially those in the college of medicine, are also beginning to embrace starting their careers from the campus.

Didi’s case is not different from Bashir Alabi, a 400 student of mechanical engineering, who is now a part-time software engineer.

Bashir, 25, said he spent most of the 2020 ASUU strike to earn some degrees on Coursera. He said his effort to earn degrees in software engineering afforded him an avenue to gain an employment contract with a tech firm.

Seyi Kolawole, a management consultant at PwC, said the incessant ASUU strikes will continue to adversely impact the employability of an average Nigerian public university graduate.

“The strike only makes unemployment worse because the job creation is not increasing and those held back due to strike will be released at a future time,” he said.