Femi Fani-Kayode’s ex-wife, Precious Chikwendu, has exchanged words with a troll who made an insensitive comment about being the next to be ‘cried over.’

This comes amidst the controversy trailing the businessman, Ikechukwu Darry Ogbonna, popularly known as IVD following the death of his wife to domestic violence.

It would be recalled that Precious Chikwendu fought tooth and nail to return to the life of her children following the battle for custody with her husband.

A social media user, however, wished Precious the same fate as IVD’s wife following her reconciliation with Femi Fani-Kayode.

“You are next to be cried over since you choose to go back to the animal the whole world joined you in fighting,” the troll wrote.

See their interaction below: 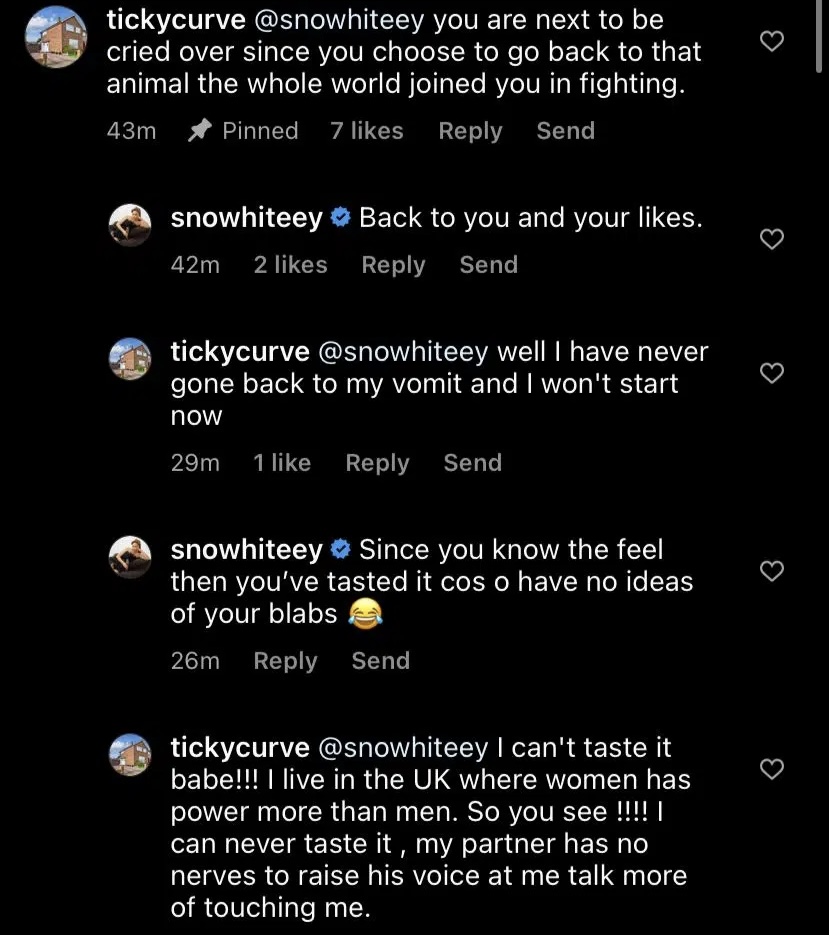 WITHIN NIGERIA recalls after FFK and Precious Chikwendu were spotted at a house party last week at Senator Sani Musa’s home, many claimed they were back together.
According to a source close to the couple, FFK wants Precious Chikwendu back and the two are currently working on their marriage.

However, Precious Chikwendu, mother of FFK’s four boys took to the comment section of a blog to debunk the speculations.

She however, added that she would gladly call for a press conference to announce her return if need be. Precious Chikwendu wrote:

“Source please! I am not having myself dancing in any speculations this time. I am bold enough to call a press conference to announce my return if i do wish to do a 360. You all like hypocrites.

I take it i am also to wash off the memories of everyone i knew as a wife as well as hate their wives and not honor them because my ex husband is at their party and avoid him, must i for public satisfaction abi?Since i must share kids and not share air and space , produce a customized air , family friends and life for me accordingly.
Plus this ain’t news worthy, were it to be true. Lets apply the pressure dedicated to such gist to voting in a competent president that would help most of us be busy enough to ignore baseless speculations.”

The controversial couple resumed a renewed marital relationship in June after a long-running marital crisis which broke out in 2020, followed by legal battles.

In the heat of the crisis, Precious Chikwendu was docked in a Federal High Court (FHC), Abuja for the attempted murder of her ex husband, Fani-Kayode following charges of attempted culpable homicide, before Justice Inyang Ekwo.

Precious Chikwendu and three others, were charged for alleged attempt to stab Fani-Kayode with a kitchen knife on Nov. 24, 2018, at Asokoro, within the court jurisdiction.

Others arraigned alongside Precious Chikwendu include Emmanuel Anakan, Prisca Chikwendu and Osakwe Azubuike as 1st, 3rd and 4th defendants respectively, while others are said to be at large.

In a 13-count charge dated and filed on Jan. 7, the defendants were also alleged to have committed offenses bordering on cybercrime, intimidation to kill Fani-Kayode by use of the Internet, threat to kill one Lauretta in order to cause her to leave her relationship with Fani-Kayode.

But surprisingly, on Thursday Fani-Kayode issued a statement, describing their reunion as a truly surreal and historical moment.