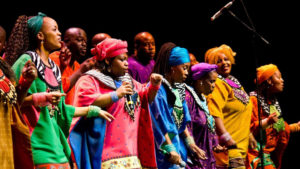 Five groups got nominated in the ‘Best World Music Album’ category for the 61st annual Grammy awards in 2018.

On February 10, 2019, the only Nigerian act and son of late Fela Anikulapo Kuti lost out to the South African group who won for their album, “Freedom.”

Here is what you should know about the South African group that beat Seun Kuti:

In 2002, 43 of the most talented choristers from churches in Soweto came together to form a group. Together, the group performs songs in English and five of the 11 official South African languages.

The gospel choir released its first album, ‘Voices of Heaven,’ on June 7, 2005. It made its way to the top of Billboard Magazine‘s World Music chart three weeks after its release in the United States.

The group has performed at the 46664 concerts for Nelson Mandela. They have also played at the Carnegie Hall in New York, the Sydney Opera House and the Royal Festival Hall in London.

Other appearances include the FIFA opening concert in Soweto in 2010, the 75th and 80th birthday celebrations for the choir’s patron, Archbishop Desmond Tutu.

They recently performed with Beyoncé in her Zulu rendition of “Halo” at the Global Citizen Festival: Mandela 100 concert in December 2018.

Their first Grammy win was in 2007 for the “Best Traditional World Music Album.” The group won the same award in 2008.

The group just got its third Grammy award for their album, “Freedom.” They won in the ‘Best World Music Album’ category.