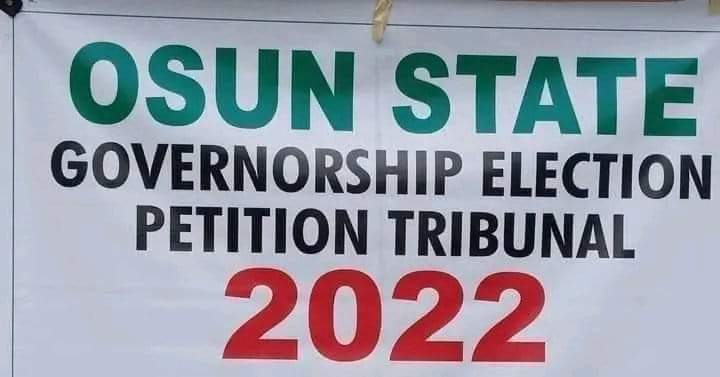 In compliance with the directive given by Tribunal Chairman, Justice Tertsea Kume, November 25, the Independent National Electoral Commission, INEC, has presented Form CF001, which contains the WAEC/GCE Certificates and Secondary school testimonial of Governor Ademola Adeleke, before the Osun Election Tribunal, sitting in Osogbo.

Recall that Justice Kume had ordered the INEC Chairman to produce the form CF001 after INEC Officials in Osogbo alleged that the documents were not in their custody, but with their headquarters in Abuja.

The INEC lead Counsel, Professor Paul Ananaba, submitted in court that they had obeyed the order as was given, and that the documents in question have been brought from the INEC Headquarters by one of the Deputy Directors, Mrs Joan Arabs.

Shortly after Arabs presented the documents to the court, it affirmed and admitted that the directive had indeed been complied with.

However, after going through the two-page documents, Counsel to the Petitioners, APC and Gboyega Oyetola, informed the tribunal that the documents produced by INEC were not clear and as such, could not be used to further their case.

Counsel to the petitioners, Mr Lateef Fagbemi,  after having gone through the documents, submitted that the documents could not be used to produce their case. He pointed out that they had paid N305,000 for the documents. However, the first document which is the WAEC/GCE had no result details on it. According to him, only the signature at the bottom was legible.

He went on to add that even the second document which was the School Testimonial gotten from Ede Muslim Grammar School by Adeleke, did not have the address or location of the school on it, insisting that because they lacked clarity and legibility, they would not be able to use or manage them.

The counsel of the petitioners urged the Osun Election tribunal to admit their objections to the documents produced by INEC.

On her part, Justice Kume upheld their objections and ruled that INEC did not fully comply with the tribunal’s order to produce Form CF001, because the documents produced were not clear and ordered INEC to produce clearer and readable copies of the documents.

Counsel to INEC put up a request to the tribunal to permit it snap the documents in their custody in Abuja and forward to them in order to ensure that the hearing goes on. Justice Kume granted the request, allowing a break of thirty minutes to enable the electoral umpire get the documents.

On continuance of the hearing, after the 30 minute break, Ananaba confirmed that INEC Abuja had made a screenshot of the copy of the documents. He printed and presented it to the Osun Election Tribunal.

Justice Kume, however stated that the copies were just like the one brought by the Deputy Director and wasn’t better than it. After arguments and submissions by counsels of the petitioners and respondents, they concluded that the original file containing the form CF001 in the custody of the INEC in Abuja should be submitted to the tribunal by next week.