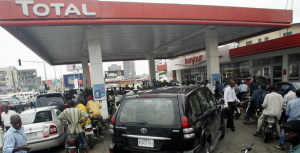 Queues for the purchase of fuel have continued to emerge at various fuel stations across Nigeria.

When Channels Television crew visited some petrol stations across the oil rich nation, the queues continued to mount and some operators, who spoke off-camera, could not explain the cause of the fuel scarcity.

An attendant at a filling station in Bariga, Lagos, told Channels Television’s crew that the station had not sold petrol for the past three days, as tanks were dry and queues were mounting because they could not load products from the depot after exhausting the ones they had in their reserve.

Some of the petrol stations have increased their pump price from the official price of 87 Naira per litre to 100 Naira and above.

This move has attributed to higher cost of the product at the Nigerian National Petroleum Corporation’s depot.

The fuel scarcity has begun to inflict pain on motorists, and commuters who are sometimes left stranded at major bus stops and motor parks, while fares have been increased to some destinations. In most cases, fare has doubled.

In the meantime, the NNPC has asked members of the public not to engage in panic buying, as the corporation was working with all downstream industry stakeholders to eliminate the noticeable artificially induced fuel queues in some fuel stations.

On February 27, the NNPC said it added 688 million litres of petrol in the market to cushion the artificial scarcity witnessed in some states.

The corporation’s spokesman, Mr Ohi Alegbe, in a statement, said panic buying might be the reason for the artificial fuel scarcity.