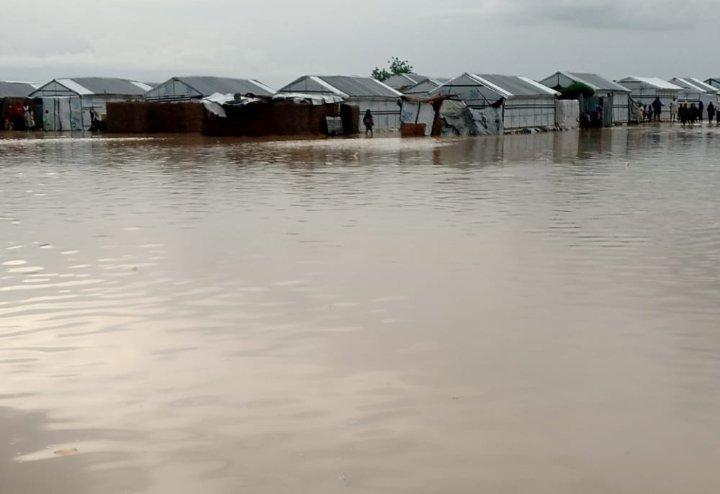 As floods continue to ravage most parts of the country, residents of Aeroplane Road in Yenagoa, Bayelsa State and Bomadi Local Government Area of Delta have raised the alarm over floating corpses from submerged cemeteries in their areas.

This came as several communities in Bomadi, Patani and Burutu local government areas of Delta State were yesterday sacked by the ravaging flood, with indigenes sleeping on top of Bomadi Bridge.

Vanguard reported yesterday that this year’s flood is perhaps the worst in Nigeria’s history, with over 603 dead, two million displaced and hundreds of hectares of farmlands destroyed.

Raising alarm yesterday over the health implication of floating corpses in their community, residents of Yenagoa in Bayelsa called on the state government for immediate action to avoid a public health crisis.

Confirming the incident, a resident, Mr Emmanuel Oden, lamented that the floating corpses had become a recurring development during floods, adding that relocation of the cemetery is long overdue.

Oden further alleged that corpses at the cemetery were often buried in shallow graves of about 3 feet, rather than the recommended six feet prescribed by law.

Another resident Mr Ebi Owoupele, pleaded with the Bayelsa State Government to understand the plight of the people and assure them that the cemetery will be relocated.

Vanguard’s findings also revealed that the morgue at Bomadi General Hospital and Olodiama had been submerged, also with floating corpses as a result.

Contacted, the state commissioner for environment and chairman of Bayelsa Flood Committee, Mr. Iselema Gbaranbiri, who confirmed that three floating corpses were recovered and reburied with the environment properly fumigated.

His words, “the floating of corpses were actually reported. First, as commissioner for the environment, I got the report of a floating corpse and directed my head of health and sanitation to get the corpse reburied. Later two more corpses were recovered and reburied and the environment was properly fumigated.”

More disaster was recorded in parts of Delta State yesterday as many villages in riverine Bomadi, Patani and Burutu local government areas of the state were sacked by floods, with indigenes sleeping on Bomadi Bridge.

They appealed to the state government and political leaders to come to their aid.

Lamenting the situation in his community, the chairman, Bomadi federated community, Mr Seleyeibo Perekeme, said neither government nor political leaders from the area had responded to their call for help.

He said: “The entire Bomadi Local Government area is submerged, with only the council secretariat still standing because of community efforts.

“We’ve been able to dislodge the flood by blocking entry points with sand-filled sacks at the community waterfront through our earlier efforts. Now, the flood level has risen and we’ve been making similar efforts but we’ve run out of resources as a community.

“So, we’ve been calling on our political leaders to help since Bomadi is the last community standing and victims are fleeing in from neighbouring communities, such as Kpakiama, Oboro, Esanma, Tuomo, Tubegbe, Koloware, Ogboin-ama and many others in both Burutu and Patani council areas. Many victims are fleeing from Yenagoa to Bomadi.

We need N2m to save Bomadi town from submerging—Community chair

“If we can get N2 million, we can buy sand and sacks and be able to block entry points along the length of the community shoreline because the youths are ready to work to save Bomadi.

“But, until this moment, there’s no response from either the state government or our political leaders at a time of pains and distress as this. We are not happy because we seem to have been forgotten or abandoned,” he said.

An activist and youth leader, Comrade Kenneth Mezeh, however, lauded the efforts of the community leader and appealed to both state government and political representatives to respond to the plight of victims in Bomadi local government area and environs.

However, the chairman, the Christian Association of Nigeria, CAN, Bomadi local government chapter, Apostle Liberty Usiayo, in his reaction, said: “We have been going round the council area to see the level of flood devastation on the people and property, and the situation is really pathetic.

“No community is safe in the council area as all eleven communities have been ravaged, with women and children seriously affected. They need immediate food and medical attention.

Reacting to the devastating effect of the flood in the state, former Delta State governor, Chief James Ibori, yesterday urged government agencies at the federal, state and local government levels to provide relief materials to flood victims across the country.

While condoling with flood victims, Ibori, in a tweet on his official Twitter handle, said: “Government agencies at all levels must act promptly to provide relief to those affected by floods in our country.

“The loss of lives and property caused by massive floods ravaging several states across the country as a result of the release of water from the Lagdo Dam in Cameroon must be dealt with decisively to ensure this never happens again.”

Moved by the sufferings of the people, PDP governorship candidate in Delta State, Sheriff Oborevwori, yesterday, donated bags of rice, yams, bags of garri, noodles, packs of bottled water, tissues, bags of salt, beans and other relief materials to victims of the ravaging flood in the state.

Oborevwori, who is also speaker of the state House of Assembly, made the donations when he visited the victims at designated Internally Displaced Persons, IDPs.

Chatting with newsmen moments after the donations, Oborevwori said: “I have visited the ICS and Alaka camps and I am here at the Delta State University of Science and Technology, Ozoro to ascertain the level of damage done by the flood.

“We understand that the university has been closed for two weeks. We pray that the floods will recede soonest. There is nothing man can do because it’s a natural disaster.

The All Progressives Congress, APC, candidate for the Sagbama/Ekeremor Federal Constituency in Bayelsa State, Michael Olomu, also donated items worth millions of naira to flood victims in the Sagbama Local Government Area of the state.

In a statement, his media office explained that Olomu was touched by the pains of the vulnerable people, personally visited the area at weekend and donated relief materials to reduce the agony caused by the flood.

Olomu also visited sick people in various hospitals in Sagbama, Bulou-Orua and the Adagbabiri communities, all in the Sagbama Local Government Area. Some of the items donated included foodstuffs such as garri, rice, noodles, salt and seasonings.

Also reacting to the situation, National Assembly members from Bayelsa State, comprising senators and members of the House of Representatives, yesterday raised alarm that the state had been completely severed from the rest of the country.

The lawmakers at a briefing in Abuja yesterday, said floods had sacked many people from their homes and communities, prompting untold hardship.

Agbedi said: “Considering that Bayelsa State is not just the worse affected, but one that has been completely severed from the rest of the country as a result of the complete erosion across several sections of the East-West Road, it is our additional call, therefore, on Mr. President to declare a state of disaster emergency in Bayelsa State.

“Similarly, we call on ministries, departments and agencies, such as the National Emergency Management Agency; National Commission for Refugees, Migrants, and Internally Displaced Persons; and the Federal Ministry of Humanitarian Affairs, Disaster Management, And Social Development for their considered, immediate intervention with medicines, foodstuffs and other relief materials.”

About  4,745  displaced persons across 73 communities in Ndokwa East Local Government Area, Delta State, yesterday declined relocation from their flood-ravaged communities over the desire to secure their properties and prematurely harvested farm produce.

Chairman of the local government area, Mr Juan Governor, who disclosed this, noted that from reports gathered during a zoom meeting of the NELGA 2022 Flood Management Committee,  the flood had started receding in the NELGA communities, along the upper part of the River Niger and Ase Creek.

He said: “Other IDPs still in all other NELGA flood-ridden communities are dwelling in clusters at the few-storey buildings in the various communities.

“So far, the number of IDPs in these flooded communities who declined relocation is reportedly estimated to be 4,745 persons across  73 major communities visited by the NELGA 2022 Flood Management Committee.