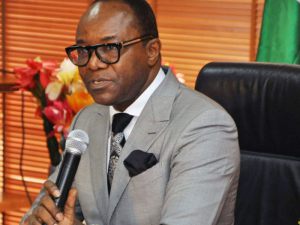 The Minister of State for Petroleum Resources, Dr. Ibe Kachikwu has stated that the federal government might sold the country’s refineries as scrap metals in few years’ time if the Nigerian National Petroleum Corporation (NNPC) did not sit up and make the refineries to be functional.

As the then Group Managing Director of NNPC, Kachikwu had in September 2015 given a 90-day ultimatum to the Warri Refining and Petrochemicals Company (WRPC), to commence operation at its full 125,000 barrels per day capacity.

“So, whatever you need to do to get your refinery back on track please do it now because this is the time. It’s a 90-day fast-track programme and whatever you need me to do to make that happen, let me know,’’ Kachikwu reportedly said at the end of a facility tour of the plant.

But nearly two years after the expiration of the ultimatum, the refinery has continued to operate epileptically.
For instance, the NNPC’s latest financial report for May 2017 showed that the consolidated capacity utilisation of the three refineries declined from 24.59 per cent in April 2017, to 23.09 per cent in May.

In a remark during a facility tour of Dangote Refinery in Ibeju-Lekki area of Lagos, Kachikwu disclosed that the country might end up selling the refineries as scrap metals in a matter of years if the NNPC did not sit up to rehabilitate the plants.

Kachikwu noted that apart from the savings in foreign exchange for Nigeria, Dangote Refinery has brought hope in a country where the people have lost hope in the ability of the country to do things right.

According to him, the foreign exchange savings is minute compared to what the refinery “is doing in terms of the hope that the future portends because we are in a country where increasingly people are losing hope in our ability to do anything right.”

“I said it in very many speeches that if our own refineries do not sit up, we probably, would be selling scrap metals in a matter of years and that is the reality. So, what this project has also done is motivated substantially, the NNPC because to take very seriously my drive to repair the refineries and get them working.

It is not anything compared to the sheer size of what you are doing here, but at least, it complements. I think Nigeria should be the citadel of petroleum exports in Africa. We have wasted this opportunity when we would have done it cheaper. But the time is never too late. If you could do a project of $12 billion to $14 billion at the private sector basis, it goes to say that the private sector is really the answer to Nigeria’s problems,” Kachikwu explained.

Kachikwu said Nigeria’s oil and gas industry had in the past destroyed itself in terms of practices and policies and habits.

“Now, where do we come in as government? I think the first thing is that we must look seriously at whatever incentives this business needs. You don’t invest $14 billion in a country without sufficient incentives to drive the business. So, whatever it takes and I think somebody is doing studies,” he added.