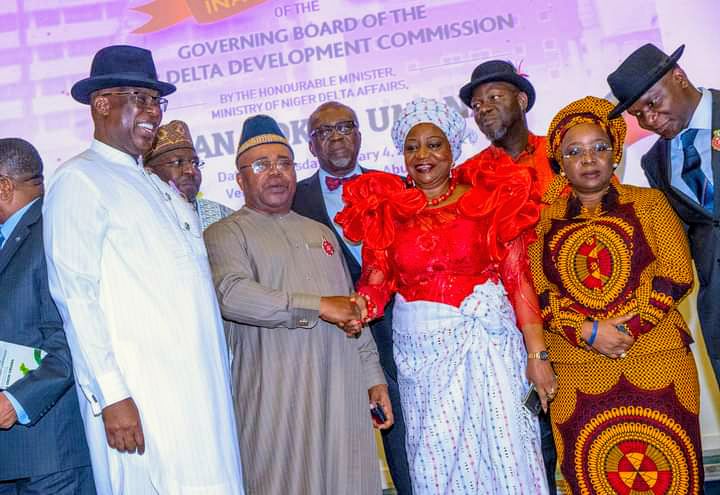 Just a few months to the end of the Buhari-led administration amidst myriad of crisis and pending court cases, Nigerians have had mixed reactions as the federal government   inaugurates the NDDC Board, Wednesday, after over three years of making reversal policies.

As the FG inaugurates the NDDC board in Abuja, the Minister of Niger Delta Affairs, Mr Umana Umana made a call to the board to kick off operations immediately by implementing the recommendations of the Forensic Audit Report presented by the commission in 2019.

He particularly harped on the need for the board to pay attention to the ‘allegations of irregular employment from 2019 and follow up on the ongoing personal audit in the Commission to make sure all cases of employment during the period under review were in accordance with extant rules and regulations of the service.’

He also called on both the board and the management to strictly follow the terms of the Procurement Act and the financial regulations so as to be sure that there is prudence in managing their limited resources.

Hear him: ‘Every contract above the threshold of management is to be referred to the Ministerial Tender Board of the Federal Executive Council.’

‘Any breach of contract approval limits will attract severe sanctions’.

He urged members to pay attention to completion of the ongoing, while advising them to eschew the lure of awarding indiscriminate and spurious new contracts in order to aid in changing the negative perception which the public has concerning the NDDC.

Speaking, at the inauguration, Secretary to the Government of the Federation, Mr Boss Mustapha who was represented by a former Permanent Secretary, Mrs Habiba Lawal, noted that it wouldn’t have been possible without the collaboration of the National Assembly.

He went on to charge the new board members to put in their best efforts in order to transform the lives and environment of the Niger Delta region, adding that there was a need to strive for transparency and due diligence in its every activity, so as to bring back hope and resilience of the Niger Delta people in the Commission.

Shortly after the FG inaugurated the NDDC board, the new chairman, Onochie, called on Nigerians, especially from  the Niger Delta region, to support them with all they needed to deliver on their mandates, giving full assurance that the board already had a template for seeing that the socioeconomic development of the region is speedily developed.

She gave full assurance that continuing to work with a failed template and getting a different result was out of the question, as she intended to bring positive changes to the table.

Her words: ‘we are going to do things totally different so that the people of Niger Delta can benefit from what Nigeria has been investing in the region. In the past, many investments in the Niger Delta has found its way to Abuja, London, Dubai and elsewhere’

She assured that the goal of the new board was to encourage youth development as they intended to equip the youths in Niger Delta with the right skills that will equip them to compete with their peers from other climes.