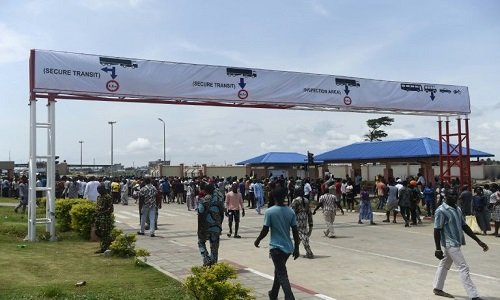 The Federal Government on Monday listed conditions that must be met before it would reopen the nation’s land borders, closed since August 18.

There has been pressure from Benin Republic and Niger Republic – Western and Northern neighbouring countries – because of the effect the border closure has on their economy. Togo and Ghana have also been clamouring for the borders to be reopened.

However the government has extended the closure till January 31, 2020 when the action will be reviewed.

on Monday in Abuja, Minister of Foreign Affairs Geoffery Onyema, who rolled out the conditions, said they would be presented to Benin and Niger governments at a meeting in the next two weeks.

The duo spoke on Monday at the end of the tripartite meeting of Federal Government committee on border closure. With them at the meeting was Minister of Interior Rauf Aregbesola.

Onyeama said only travel documents allowed for anybody coming into the country thorough the land borders is the official passport. No form of identity cards will henceforth be acceptable, he said.

The preconditions to allow goods and humans into the country will apply to all ECOWAS member states.

Onyeama said the conditions are aimed at ensuring that the country does not end up as dumping ground.

Besides, he noted that there must be a recognised proper transportation system for importation of goods into Nigeria.

The minister said within the next two weeks, a tripartite committee is to be convened and hosted here in Nigeria, comprising the delegation- committee from Benin Republic, Niger and Nigeria. Each country will come with the heads of the ministries of foreign affair, interior , finance, the customs, immigration and the NIA, the security segment. It will take place within the next two weeks .

“We have agreed on a set of conditions. Now, these conditions are as follows; that it is an absolute requirement of the government of Nigeria, that any import coming through our land borders ,when those import transit in goods, when they are coming from outside the ECOWAS region and imported into an ECOWAS member state, those goods should retain their original packaging. There should be no modification whatsoever to the packaging of those goods imported into an ECOWAS member state destined for Nigeria. They must be escorted from the port directly to the designated entry point in Nigeria border, so presented to Nigeria customs with the packaging intact and those goods  escorted.

“This is an absolute condition that will not be compromised.  For goods predominantly produced in ECOWAS member state, the rules of origin must be satisfied.

“We would absolutely insist on the respect of ECOWAS rules of origin in ensuring that they actually did come from ECOWAS member states.

On transportation of goods within ECOWAS and across borders, we would now insist on proper recognised packaging of those goods. No longer would we have good of all shapes and sizes just going through the borders.

‘We are going to have accepted conditions for the packaging of goods that would be transported by roads across our borders to maintain best practices in packaging of those goods.

“We would like to take this opportunity also to acknowledge the very positive steps that have been taken by both Niger and Benin Republic. As you would know, they have put in place law banning the exportation of rice and we believe also that this will go a long way in addressing mischiefs that this border drill was designed to address.

That is where we are at this particular point in time. “

The Custom CG said: “Once an agreement is reached then we start implementing it.”

On the fear of retaliation by neighboring countries , especially Ghana, Ali said: “I don’t think we have gone that far yet. Don’t forget that the minister of foreign Affairs was there three weeks ago and just last week, the minister of state was there with the minister of trade and we had a very useful discussion.

“Actually, the Ghanian authorities have been waiting for the type of statement that has just been made by our Minister of  Foreign Affairs and did allay their fears and assured them that we are on the same page. They do appreciate the fact that they are not the target. In fact,  this exercise is not targeted at any nation. It is only to secure the interest of Nigeria and Nigerians and we did explain this to them and they promised us that they were going to convey this message back to their government and people.

“I am very sure that the Ghanian government is fully on top of the matter because they do understand and appreciate precisely what we are doing as a nation.

Also on Monday, Special Adviser to the President on Economic Matters in the Office of the Vice-President, Dr Adeyemi Dipeolu, said: “We have signed the (AfCFTA) agreement, but we have not ratified it. More importantly, the AfCFTA is trying to introduce a rule-based trading system in Africa. Now, the very people who have already signed previous agreements with Nigeria on Customs cooperation and the rules that will affect transit of goods are not living up to those obligations. So, you are not following on the things you have signed to and you want to hold me onto the things I have just signed to”.

“What you will then have is that I will sign onto the AfCFTA and you will continue to do these things you are doing to undermine my economy by smuggling, dumping. So, I think it’s an opportunity to remind ourselves that all obligations must be adhered to.”

He added: “When Nigeria increases tariff on rice in 2013 and since then the export of rice to Benin has been 500 per cent since on par boiled rice that they do not consume. How do you explain that Benin, with a small population, will become second largest importer of rice after China?”

Dipeolu assured that the government would respect the cooperation agreement that it has signed with other countries.

He said: “We are tired of our stories been told us by others.  It is time for us to tell our stories ourselves.  Our continent has not got a good press.”

Holding a different view from the Economic Adviser, Senator Shehu Sani said “The closure of the nation’s border is not in line with the overall objectives of the agreement.”

He added: “The idea of an African Free Trade Area is that our future and destiny is tied to each other. But there are challenges that we have to be ready to face. One of which is the one that we are experiencing in the country today.

He argued that “you can’t sign an African Free Trade Agreement and close your borders. I don’t know how to call black white, and you also have to tell yourselves the truth that if we are desirous of building a more economic future for our continent, then we have to sacrifice some of our irrelevant relationship with nations that are outside the continent.”

Central  Bank of Nigeria (CBN) Governor  Godwin Emefiele, expressed optimistic that Africa’s huge potentials can be realised for the benefit of its people. But for this to happen, we must invest massively in human capital development to be globally competitive. The continent’s significant youthful population is an asset that needs to be put to full use” he said.

He noted that “equipped with health, education, the right skills, jobs and entrepreneurship opportunities, Africa’s youth can be an important driver of sustainable and inclusive economic growth we seek.”

He added: “We must scale up private investment to complement public efforts, especially with limited fiscal space. Investments in infrastructure such as transport, power and information and communication technology (ICT) must also be prioritized to provide the enabling environment that will support economic growth on the continent.”

According to Emefiele, “whilst the path to realizing these objectives will no doubt be challenging, these challenges are not insurmountable.”

In his keynote address at the African Economic Congress (AEC), Kenyan Vice President William Ruto, described corruption as a major threat to Africa’s economic growth aspirations. He lamented that the huge illicit financial flows out of the continent, put at $50 billion, annually, remained a challenge to efforts towards socio-economic development of the region.