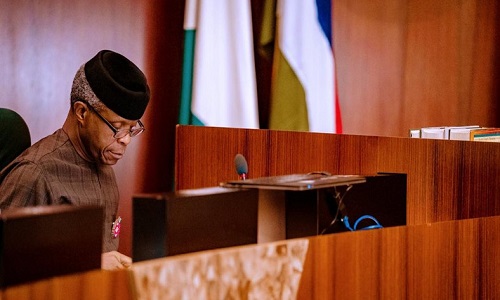 The Federal Executive Council (FEC) on Wednesday directed the Minister of Finance, Budget and National Planning, Zainab Ahmed, to effect payment of arrears of the new minimum wage on or before 31st December, 2019.

This was disclosed by the Minister of Labour, Chris Ngige, at the end of FEC meeting chaired by Vice President Yemi Osinbajo at the Presidential Villa Abuja.

He also said FEC approved the minimum wage to take effect from 18 April 2019.

According to him: “Today we sent to the Federal Executive Council our report and the conciliation that was done last week between the Organised Labour and federal government of Nigeria on the issue of the new national minimum wage which has been fixed at N30,000 a month and the consequential adjustment that were meant for salaries and wage structures of the public service thereto.

“You will remember that last week when I briefed the press, I told you that the salaries and wage structure ….. into four class. Health, Armed forces service, research institutes and the

“In the CONPPS which is the pure civil service structure and agencies earning the same wages as those in the public service. You have the CONRESS AND CONTISS which is compactmental 2, they have 23.2 percent equivalent and 14-16 10.5 percent.

“Police and other security agencies because they have had a pay rise, last year, they were consequentially adjusted to between 4 and 7 percent. Same goes for the paramilitary. They also have their consequential pay rise.

“So FEC today approved for us that the financial implications worked out by the national incomes and wages commission that the salaries adjustment should take effect as from April 18, 2019 the day the new national minimum wage Act came into being.

“Council also approved for us that the financial implication be worked out and the payment should be completed on or before 31st December 2019.

“Council further directed that the minister of finance budget and national planning through the office of the accountant General of the federation should effect all these payments before 31 December 2019.

“Council further directed also that the national income and wages commission and the Ministry of Labour and employment should send the consequential adjustment table down to the states and local government as an advisory document for their information and guidance for their national joint public service status in their respective states because the national minimum wage is a national law.” He said

The Minister of Aviation, Hadi Sirika, said FEC approved N1.7 billion for procurement and installation of communication equipment for airport towers in Zaria and Katsina.

The equipment, he said, is to ensure safety and efficiency at the airports.

He said the completion period for the contract is eight months.

Sirika said “We presented a memorandum for the award of contract for the procurement and installation of communications equipment and for control towers in Zaria and Katsina.

“The total contract sum is N1,7 billion including Value Added Tax (VAT). The completion period is for eight months. This is to address critical safety issues in such a way that there will be better communication and efficiency in the control towers in Zaria and Katsina and this is ongoing similar to what we have done in other airports. This is to make air transposition more efficient to make sure we save time and money.” He stated

Minister of Science and Technology, Ogbonnaya Onu, disclosed that the FEC approved the use of methanol in the Nigerian economy.

He said that methanol is deriveable from gas that accompanies crude oil.

According to him, it has been profitable for oil companies to flare the gas, which has posed great environmental problems in the country.

He said FEC has approved methanol to be used as transportation fuel, cooking.

Stressing that it is cheap and safe, he said that it will also check deforestation in the country.

He said that the project cannot be achieved overnight as plants have to be built and other logistics put in place.

The minister said it will be private sector driven.

He said “The federal ministry of science and technology presented a memo to the FEC that requires the utilization of methanol in our economy. The problem that we have in the Niger Delta where our natural gas is flared and it has created lots of environmental problems for our fellow Nigerian living around.

“This is a major concern to this administration. One way to help us to completely solve this problem of gas flaring is to convert the natural gas into methanol. You can use methanol for transportation, all these racing cars that you find with M85, M100 essentially that M is methanol means it’s 85 per cent methanol, 15 per cent gasoline.

“But for ordinary use, normally the blending will be 15 per cent of methanol so that you don’t have to make any adjustment to your vehicle.

“Then also, methanol can be used to replace diesel in these trucks that we find in our highways because methanol is cheaper and it is environmentally friendly so that all the problems that are associated with the use of diesel, that can be solved by the use of methanol.

“Also, our people in rural areas can use methanol for cooking, so that it can replace kerosene because when you use kerosene it creates health problem for you but methanol does not have that, it’s very clean, safe and cheap.

“It’s one way that we can utilize our gas in our rural areas and it’s going to help us in addressing the issues of deforestation and today we are loosing many of our forest trees because we are using them for domestic energy.

“So methanol will do this and methanol is also used for generating electricity which we can use to power our plants and many other plants that currently used diesel, methanol will be a replacement.

“This is what the federal executive council has approved and once this is implemented, it will help us to create new businesses particularly micro and small businesses that have the potential to grow into bigger ones.