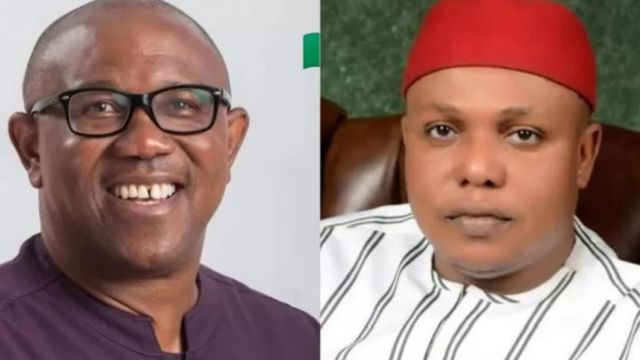 By Uche Amunike
The Calistus Uju Okafor faction of the Labour Party (LP) has held its National Convention, Tuesday, which produced Ambassador Jude Ezenwafor as the Labour Party Presidential Candidate of their faction of the party.
Speaking to newsmen in Abuja after the convention, Okafor who is the former Deputy National Chairman of the party, confirmed that his faction had successfully concluded both the National and House of Assembly primaries on Monday.
He further stated that all necessary plans to hold the presidential primary election on Wednesday, where the Labour Party presidential candidate will be elected had been perfectly executed by his faction, adding that the list of candidates that had been assembled so far will be submitted to the Independent National Electoral Commission (INEC), on or before Friday.
He maintained that his position was based on the need to see that justice, fairness and equity prevailed, adding that he had nothing against former Governor Peter Obi, who the other faction of Labour Party had chosen as its presidential candidate.
Okafor, who reiterated that he was still the Acting National Chairman of the LP after its late Chairman, Abdulkadir Abdusalam was sacked, attested that there was no agreement presently made between himself and former presidential spokesperson, Dr Doyin Okupe who is now Peter Obi’s Campaign Manager.
His words: ‘Doyin Okupe, it is unfortunate that people take someone else for granted. I wonder why people want to use others for their selfish interest.’
‘I am fighting for justice. There’s no where in any political party that an acting national secretary can take over the national chairmanship position. We have the deputy vice-chairman and the zonal vice chairmen.’
‘There is no where in the constitution that says an acting national secretary could take over the leadership of a political party when the deputy national chairman and zonal vice-chairmen are present. I am not persecuting Peter Obi.’
‘When Okupe called me, I told him that I was open for discussion. I was now surprised when he went to the media and said a different thing from what I told him.’
‘It is clear that he wanted to take me for granted. The leadership of the other faction is going about that I’m looking for recognition. It is an insult to me as a person.’
‘They should know that their leader is an acting National Secretary, while I, Calistus Uju Okafor, is the acting National Chairman. The court will soon remove them. I am very open to any discussion for the right thing to be done.’
‘The leader of the other faction should remain as the acting National Secretary while I play my role as the acting National Chairman. Every other position in the Labour Party remains the same until we all obey the consent judgment that says an all inclusive and expansive convention be held’, he concluded.
While giving his acceptance speech, the newly elected Labour Party presidential candidate, Jude Ezenwafor stated that he believed that the LP was going for a rescue mission and that he was certain that he was in the right place.
INEC has set a deadline for the election of presidential candidates and one wonders who the flag bearer of the Labour Party will be, in the light of their seeming division.
Recall that Mr Peter Obi is the candidate of the INEC-recognized Julius Abure-led faction
QUICK SHARE: