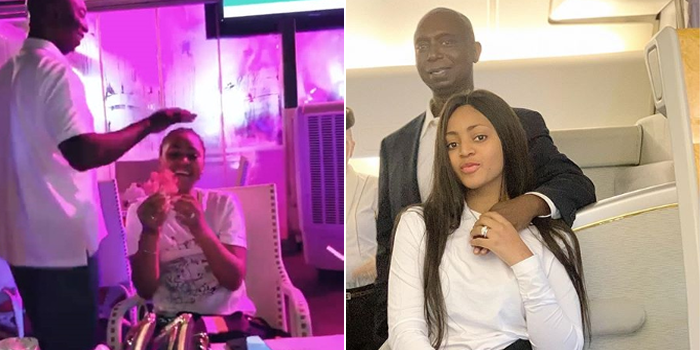 Nollywood Actress, Regina Daniels has been on a consistent level of ‘Balling’ with her husband since the day they met and later tied the knot and a social media users has frowned at that behavior.

The social media user, while commenting on an instastory shared by Regina which showed the moment she was playing Lawn Tennis with her husband in Dubai, said Ned has not been doing any other thing since he married the actress.

Sodiq went on to advise the actress to get pregnant on time before her billionaire husband loses interest and goes on to marry another girl.

Since this man married Regina..I don’t think he does any other thing..Abi dy still dy honeymoon ni. my advice to Regina is to give birth sharp sharp secure her children’s future with the man before he looses interest and marries another woman because I’m pretty sure he married her because of her young and fresh Congo which I can bet he is shinning beyond elastic limit.

I remember when I was young, a woman came to my grandpa to complain her husband was marrying another wife, he told her at your age “you’re worrying your husband is taking another wife, don’t bother about the new wife, he’s only interested in her body, put yourself together and act like the real woman of the house and watch the man come to you for not your body but your brain…..the woman now influences her husband’s major decisions, he registers most of the businesses in her name and her children while he spoils the young wife silly with gifts, and the mumu is still keeping her young body by not giving birth….