Evan Enwerem (29 October 1935 – 2 August 2007) was a Nigerian politician who served as President of the Nigerian Senate in 1999. He was a member of the People’s Democratic Party. 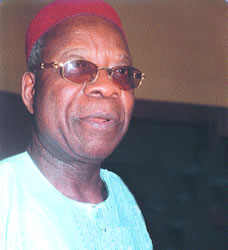 Evan Enwerem was born in Ikeduru, Imo State, Nigeria, on 29 October 1935. He obtained his bachelor’s degree from the University of Southampton in the United Kingdom.

Enwerem served as chairman of the Nigerian Airports Authority NAA between 1980 and 1983. He was elected governor of Imo State in 1991 during the failed Third Republic era of Nigerian government.

Enwerem was elected to the Nigerian Senate in 1999 to represent the Imo-East Senatorial Zone He became the first President of the Nigerian Senate during Nigeria’s Fourth Republic. Enwerem beat his chief rival, Senator Chuba Okadigbo, for the Senate presidency on 3 June 1999. Former Nigerian President Olusegun Obasanjo backed Enwerem for President of the Senate against Okadigbo. With the support of the Obasanjo’s allies in the governing parties, plus support from two Nigerian opposition parties, Enwerem easily defeated Okadigbo with 66 votes to Okadigbo’s 43 votes.

Enwerem did not hold the post of President of the Nigerian Senate for very long. A Nigerian Senate committee began investigating Enwerem for allegations of corruption in 1999. The allegations against Enwerem alleged that he falsified his name, and caused a controversy as to whether Enwerem’s actual real name was Evan or Evans. Enwerem was removed from office on 18 November 1999, in an ouster spearheaded by allies of Chuba Okadigbo. However, though removed as President of the Senate, Enwerem remained a member of the Senate until 2003.

Okadigbo, Enwerem’s rival and successor as President of the Senate, was in turn removed from office on 8 August 2000. Following Okadigbo’s 2000 ouster, Enwerem briefly expressed interest in again assuming the presidency of the Senate. However, Enwerem withdrew from the race in favor of Senator Adolphus Wabara at the shadow election conducted by PDP Senators in Senate Hearing Room One.

Enwerem ultimately served as a Nigerian Senator from 1999 until 2003 before leaving office. According to news reports, Enwerem expressed an interest in “good laws” whose “ripple effects on the populace would be wide, sweeping and enduring.”

Enwerem died the next morning on 2 August 2007, at the National Hospital in Abuja at the age of 73. He is survived by his wife Vivienne, and seven children. One of his children, Mr Evan Enwerem jnr, has been appointed as Transition Committee Chairman of Ikeduru LGA.

The then President of the Senate, David Mark, learned of the news of Enwerem’s death. Mark declined to formally announce the news to the Senate because most of Enwerem’s family were out of the country at the time. The then Speaker of the Nigerian House of Representatives, Patricia Olubunmi Etteh, issued a statement through her adviser, Funke Egbemode, saying that Enwerem’s death “would leave a gaping hole in the nation’s legislative history.”

He is survived by his wife, Vivienne