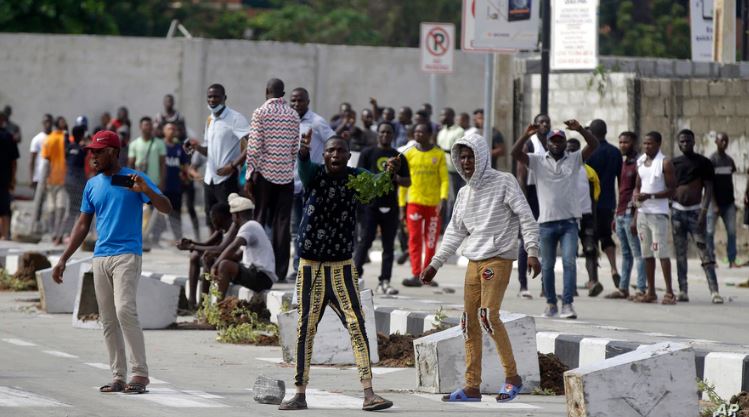 WASHINGTON – American politicians and civil rights leaders are lending their voices to the EndSARS protests in Nigeria against abuses by the Special Anti-Robbery Squad (SARS), a police unit accused of excessive violence against civilians.

Representative Sheila Jackson Lee, a Texas Democrat, wrote a letter along with the Congressional Black Caucus to Nigerian President Muhammadu Buhari urging him to reform the security sector and allow people to demonstrate peacefully.

“What is happening now with SARS and the peaceful protest of Nigerians that has been responded to by bloodshed and violence is unacceptable,” Jackson Lee told VOA.

She also co-wrote a letter to U.S. Secretary of State Mike Pompeo and to the United Nations, saying the U.S. must call for a special meeting of the U.N. Security Council to investigate human rights abuses. She has also called for more accountability and better training and equipment for Nigeria’s police and military.

Jackson Lee’s congressional district is home to the largest concentration of Nigerian Americans in the country.

“We want the United States to take a firm stand with President Buhari against this violence and to recognize that people who protest have a right to do so without violence,” she said. “And they particularly have a right to be able to utilize their streets in free expression of their voice.”

The SARS protests began this month following the release of a video showing officers killing a man who was dragged out of a hotel. Nigerians began sharing other videos showing abuse and extrajudicial killings, leading to growing outrage and widespread demonstrations.

The Nigerian government announced the dissolution of the unit. But protests have continued, and this week security forces opened fire on protesters in Lagos’ Lekki Toll Gate plaza, killing at least 12 people, according to Amnesty International.

“Those involved should be held to account in accordance with Nigerian law,” Pompeo said.

The U.S. stands with the young people of Nigeria who are peacefully protesting, said Assistant Secretary of State for African Affairs Tibor Nagy. “Their pursuit of a future filled with peace, unity, & accountability is a noble one the U.S. supports,” he tweeted.

Democrats on the Senate Foreign Relations Committee’s subcommittee on Africa and global health policy said Nigeria, as the most populous country in Africa and the continent’s largest economy, is a key partner to the U.S. They warned that continuing human rights abuses could damage that partnership. “It is, therefore, disheartening to see a valuable diplomatic and security partner resorting to violence against its own civilians,” the four U.S. senators wrote.

Buhari has urged youth involved in protests to end the demonstrations and begin a dialogue with the government, which has promised to bring justice for demonstrators killed by security forces.

‘United for a just Nigeria’

Opal Tometi, American human rights activist and co-founder of the Black Lives Matter movement, has a particularly close connection to the protests since her parents are Nigerian. She sees parallels between what is happening there and the BLM movement that swept the U.S.

“Those types of injustices that are taking place in Nigeria are also linked to the struggles that we have in different parts of the world,” she said. “We are united for a just Nigeria. We’re united [in demanding] an end to this police brutality and an end to the extrajudicial killings.”

Tometi has been in regular contact with friends and family in the country and said virtually everyone has a story to tell about abusive or frightening encounters with the police. The recent incidents have simply been a tipping point that galvanized the community to act, she said.

“I think what we’re seeing now is a courageous movement that has risen up, that has said ‘enough is enough,’ ” she told VOA. “They’re tired, especially in the midst of this time where we are in a global pandemic. People are already living on the brink.”

Jackson Lee has heard similar stories from her constituents. This week she marched with them at the Mickey Leland Federal Building in Houston and invited them to her district office to share their concerns.

“They had a video showing the outright shooting by military persons that would really break your heart, because you know that the unarmed person who has lost their life that night, someone’s young son or daughter — meaning young in their stage of life — was killed that night,” Jackson Lee said.

She said Nigerian Americans are fearful of worsening violence that could spiral out of control.

Rights groups said they have documented extensive abuse during the crackdowns against protesters. Amnesty International has called for an independent investigation into incidents in Lekki, Alwasa and other areas. Adotei Akwei, managing director of government relations at Amnesty International USA, told VOA that there was evidence that the actions by security forces had been planned.

Amnesty International also said at least 56 people had been killed over the past two weeks in protests.

“In Alwasa, we found that there was credible evidence that there were efforts to shut off [closed-]circuit TV that would have monitored how the police behaved, which indicates that they were planning a very brutal crackdown, and that’s unfortunately what happened,” Akwei said.

He urged the Nigerian government to exercise restraint.

editor@lifeandtimesnews.com - November 29, 2022 0
REDTV, United Bank for Africa's Lifestyle and Entertainment channel, has reiterated its support for the youth and creative industry, as it continues to empower young...