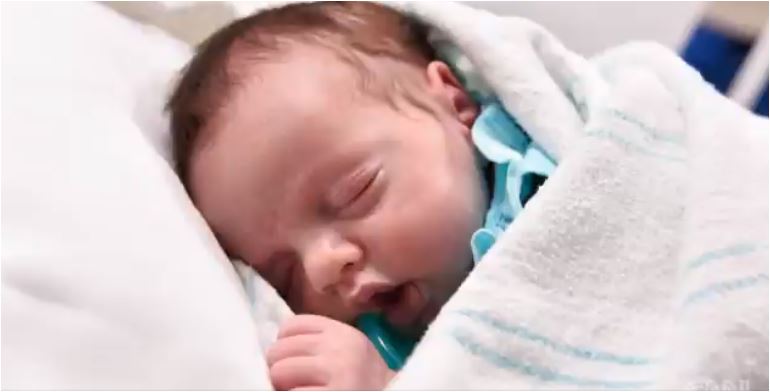 (CNN)Margaret Boemer went for a routine ultrasound 16 weeks into her pregnancy with her third child. She quickly found out that things were far from routine.

“They saw something on the scan, and the doctor came in and told us that there was something seriously wrong with our baby and that she had a sacrococcygeal teratoma,” the Plano, Texas, mom said in an interview shared by Texas Children’s Hospital. “And it was very shocking and scary, because we didn’t know what that long word meant or what diagnosis that would bring.”
Sacrococcygeal teratoma is a tumor that develops before birth and grows from a baby’s coccyx, the tailbone.
“This is the most common tumor we see in a newborn,” said Dr. Darrell Cass, co-director of Texas Children’s Fetal Center and associate professor of surgery, pediatrics and obstetrics and gynecology at Baylor College Medicine. “Even though it’s the most common we see, it’s still pretty rare.”
Found more often in girls than boys, this tumor occurs in one out of every 35,000 births.
Unfortunately, this was not the first bad news of Boemer’s pregnancy. Originally, she had been pregnant with twins, but lost one of the babies before her second trimester.
It was a shock at 16 weeks to learn of her daughter’s rare birth defect.
“Some of these tumors can be very well-tolerated, so the fetus has it and can get born with it and we can take it out after the baby’s born,” said Cass. “But about half of the time, they cause problems for the fetus and it’s usually causing problems because of a blood flow problem.”
Cass explained that the tumor is trying to grow by sucking blood flow from the baby, yet the baby is also trying to grow, too “so it becomes a competition.”
“And in some instances, the tumor wins and the heart just can’t keep up and the heart goes into failure and the baby dies,” said Cass.
With a large tumor stealing the blood supply, Boemer’s fetus was becoming more ill each day, doctors explained to the expectant mother. Something had to be done.
Although other doctors had advised her to terminate the pregnancy, Cass and his team told her about another possibility: fetal surgery. This option, though, would not be an easy road. Even worse, her baby’s chances of survival would be grim.
“LynLee didn’t have much of a chance,” Boemer said. “At 23 weeks, the tumor was shutting her heart down and causing her to go into cardiac failure, so it was a choice of allowing the tumor to take over her body or giving her a chance at life.
“It was an easy decision for us: We wanted to give her life.”

‘Kind of a miracle’

She was 23 weeks and 5 days pregnant, when Cass performed the emergency fetal surgery. By this time, the tumor was nearly larger than the fetus.
Cass and Dr. Oluyinka Olutoye, his partner surgeon, operated for about five hours.
“The part on the fetus we do very, very quickly,” said Cass. “It’s only 20 minutes or so on the actual fetus.” Most of the time is spent opening the uterus, which he described as “a big muscle lined with membranes.”
“We don’t want the mom’s health to be jeopardized,” said Cass, who explained they work carefully, both making the incision and sewing it up in order “to make that uterus be as sealed and as water tight as possible.”
Still, Cass said, the tumor in this case was so large a “huge” incision was needed to get to it, so it ended up that the baby was “hanging out in the air… Essentially, the fetus is outside, like completely out, all the amniotic fluid falls out, it’s actually fairly dramatic,” said Cass.
During the surgery, LynLee’s heart slowed down to an incredibly low rate. “It basically stopped,” said Cass. He credits the heart specialist, a key member of the team, for giving the right medication and transfusing the right amount of fluid, allowing the surgeons to continue their work.
The surgical team removed the bulk of the tumor. When they finished their operation, the surgeons placed LynLee back inside the womb and sewed her mother’s uterus shut.
“It’s kind of a miracle you’re able to open the uterus like that and seal it all back and the whole thing works,” said Cass.

Boemer was on bed rest for the remainder of her pregnancy. Despite her pain, she marshaled her strength and made it another 12 weeks to nearly 36 weeks — full term — when Lynlee Hope was born for the second time via C-section on June 6.
The little fighter, named for both her grandmothers, weighed 5 pounds and 5 ounces.
Immediately, the hospital staff whisked the newborn away to the neonatal intensive care unit for an evaluation, but after this initial checkup, she was deemed healthy and transferred to the nursery.
There’s a risk the fetus could be born immediately after the in utero surgery, or die.
After she was born, LynLee faced one more ordeal: removing the bits of tumor that surgeons could not reach, which had begun to grow again.
“At eight days old, she had more surgery, and they were able to remove the rest of the tumor,” explained Boemer.
LynLee recovered in the NICU and weeks later, arrived in her family home.
“Baby Boemer is still an infant but is doing beautiful,” said Cass, remarking that she is perfectly healthy. His one previous surgery of this kind was also a success. “I think she’s about 7 now, and she sings karaoke to Taylor swift — she’s completely normal,” said Cass.
While babies facing surgery undoubtedly struggle, mothers’ emotional journeys might be most difficult and dramatic. As Cass describes it, first their obstetrician tells them there’s something wrong and then they’re told there’s nothing that can be done and their babies will die and then a surgeon tells them there’s something that can be done. Amazingly, some end with a healthy baby.
“It was very difficult,” Boemer said.
But seeing her toddler smiling with her sisters, she added: “It was worth every pain.” 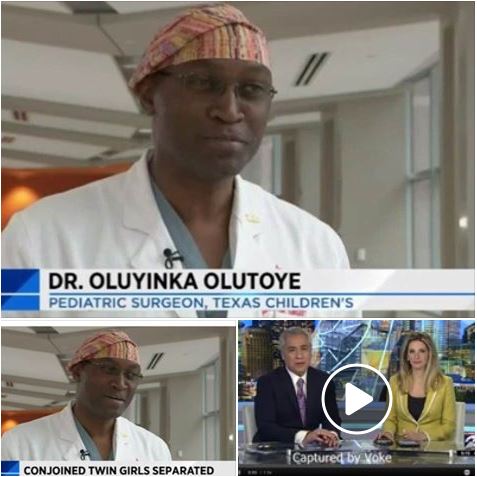 WHY DID CHANNEL 2 NEWS IN TEXAS OMITTED DR. OLUYINKA OLUTOYE’S NAME IN THIS NEWS CLIP?

Dr. Oluyinka Olutoye, a Pediatric Surgeon (with a team) successfully performed a 12-hour surgery to separate conjoined twins. But take a listen to this news clip referring to him as “the doctor who performed the surgery” but never once mentioned his name. I take a serious issue with this. Not sure exactly how to call it, but I suspect that Channel 2 in Texas deliberately omitted Dr. Olutoye’s name. I will investigate. Congratulations to my fellow Nigerian man. You have made us proud!!!