What started as a three-day protest against police brutality in Lagos stretched into two weeks, spilling over to most other states across the country.

As young Nigerians trooped en masse into the streets beginning from October 7, a major concern was the likely impact the demonstrations could have on the pandemic.

And this worry was understandable: social distancing and wearing of face masks, the two most important guidelines to protect oneself – and others – from contracting the virus, were being ignored.

By October 22 when the curtain drew on the protests, the alarm had started to ring; authorities warned that Nigerians should expect a spike in cases as more people may have been exposed to the virus.

Did that turn out to be the case?

Available data from the Nigeria Centre for Disease Control (NCDC) show there has not been any spike in confirmed coronavirus cases in the country since the protests.

In analysing the data, TheCable found that the cases confirmed have, in fact, dropped by 11.3 percent in the following weeks, when compared to those recorded in the weeks leading to the demonstrations. 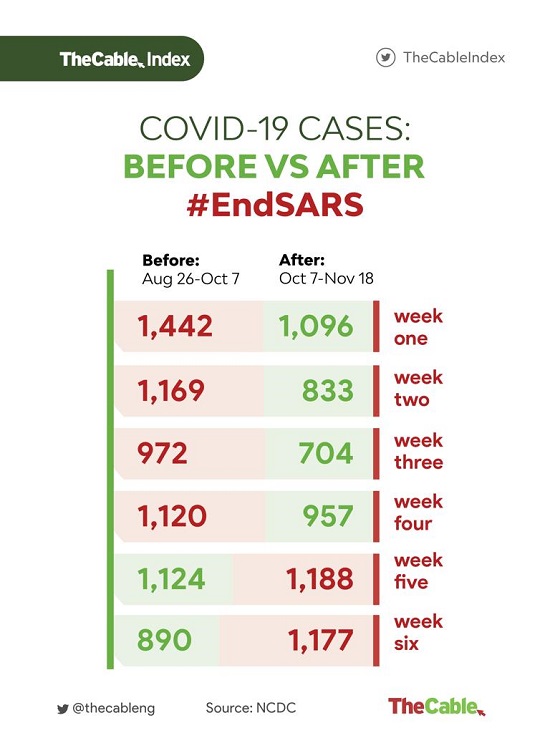 On the average, the confirmed cases have been restricted to 992 weekly since the protests, compared to the 1,119 Nigeria was recording in the preceding weeks.

The highest weekly record before, during and after the protests was 1,442 cases, which were confirmed between August 26 and September 2, while the lowest – 704 and 833 – were recorded in the two weeks following.

BUT THE DROP DOES NOT NECESSARILY MEAN NO IMPACT

Data from the NCDC only show the age distribution of the total cases, which makes it difficult to further deduce whether the rate of infection among young people — the most active population in the protests — in recent weeks has increased.

However, Chikwe Ihekweazu, director-general of the centre, confirmed that although Nigeria has not seen a spike in confirmed cases, more young people are getting infected in Lagos, where the protests were concentrated.

“There has been a recent increase in a few cases in Lagos, mostly among the younger people, younger populations,” Ihekweazu was quoted as saying on Thursday.

Moreover, a number of factors make it impossible to conclude that the relatively low number of infections Nigeria recorded in recent weeks means that the protests have not had any impact on the pandemic.

First, Nigeria’s COVID-19 testing capacity has remained a source of concern. Seven months after the country set a target to test 2 million people in three months, the country has tested only 743,300. 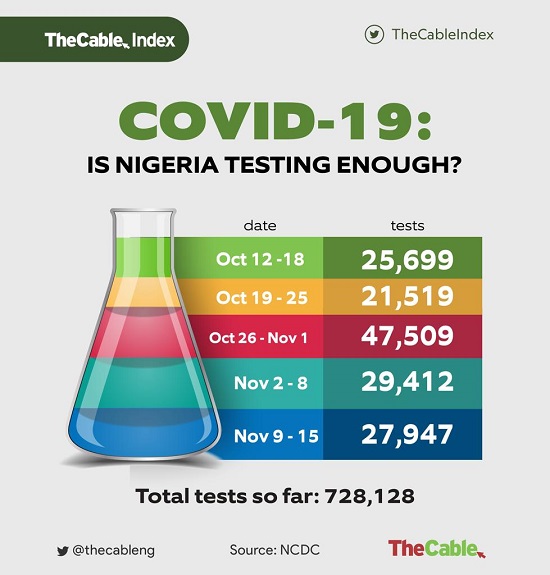 It still carries out between 25,000 to 30,000 coronavirus tests weekly, according to data from the NCDC.

A low number of testing would simply result in a low number of record cases and vice versa, as we have seen in the United States which has now carried out 175 million tests, earning it the grim record of the worst-hit country: 12 million cases.

What is more? Some of those tests in Nigeria, including the 28,800 recorded by Lagos in last week of October, were done by international travellers, corps members and civil servants – and not the protesters.

Secondly, people appear to care less about the risk of exposure to the virus; public vehicles are getting filled to the brim again while the markets are back to business as usual.

This simply means that more people may not see the need to get tested for the virus, with symptoms that would have raised an alarm and triggered a test now likely to be ignored.

So, why does testing matter so much?

Most young people who contract the virus show no or delayed symptoms, according to the World Health Organisation.

This means there is a higher chance they may not go for testing when showing coronavirus-related symptoms and, if infected with the virus, would become silent spreaders.

Even the WHO said in October that one in ten people globally may have contracted the virus – putting the true figure at about 800 million, and not the 57.2 million confirmed so far.

The pandemic has largely been an era of protests with demonstrations sprouting across various countries.

In parts of North Ameria, Europe and Asia, the extrajudicial killing of George Floyd, a Black man, in the United States, sparked a month-long protest against racism; In Israel, demonstrators have been gathering in Jerusalem to protest a litany of grievances against Prime Minister Benjamin Netanyahu mostly bothering on alleged corruption and the government’s handling of the pandemic; Spain has witnessed hundreds of residents trooping the streets to kick against “discriminatory” COVID-19 policies while thousands have held demonstrations to protest Britain’s tightened coronavirus rules.

However, researchers have not found any evidence yet that the protests caused a spike in coronavirus cases.

A particular study on the George Floyd-driven protests discovered that “cities which had protests saw an increase in social distancing behaviour for the overall population relative to cities that did not,” leading to “modest evidence of a small longer-run case growth decline.”

Reuters quoted one public health experts as saying one of the major reasons for this is that the protests have been outdoors in a very large area, especially as the coronavirus is known to spread faster indoors.

Another study, which covered nearly 40,000 people who participated in demonstrations, found that “there is a clear and significant negative correlation between the percentage of a state’s population who reported protesting and the subsequent increase in cases of COVID-19.”

#EndSARS Protest: The many unanswered questions, one year after