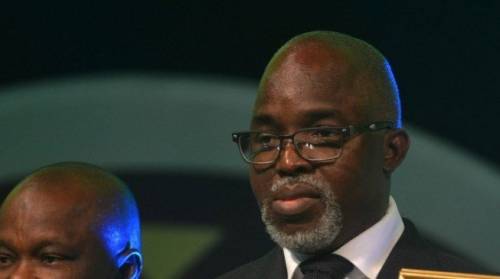 A largescale crisis is brewing in the Nigeria Football Federation (NFF), following a court ruling directing the current board of the federation to vacate office for another one to be led by Chris Giwa, who contested an election against current President, Amaju Pinnick, in 2014.

While Sports Minister Solomon Dalung has since ordered Pinnick to obey the order by quitting office with members of the board, Pinnick has rejected the order, saying “court orders are not binding on FIFA, which the NFF is an affiliate of.

In a statement released on his behalf by Festus Keyamo, his counsel, Pinnick maintained that “FIFA is only bound by the decision of the Court of Arbitration for Sports and does not entertain or tolerate decisions by local courts in footballing nations worldwide”.

If the brewing imbroglio continues, FIFA is likely going to wade in by banning Nigeria from international football.
FULL STATEMENT BY PINNICK’S LAWYERS

We are solicitors to Mr. Amaju Pinnick and the present Board of the NFF which he heads. We issue this statement on the instruction and directive of our clients which reflect their official position on the matter.

The attention of our clients have been drawn to a statement purportedly issued at the behest of the Minister of Sports, Mr. Solomon Dalung directing the NFF to comply with certain court orders effecting a change of leadership in the NFF.

Our clients wish to alert the general public and the authorities in Nigeria that the so-called directive by the Minister of Sports is null, void and of no effect for the following reasons.

(1)         Whilst our clients respect the sanctity of court orders, unfortunately the said court orders are not binding on FIFA, the World Football Governing Body. The NFF is an affiliate of FIFA. It should be noted that FIFA has consistently maintained that this same matter has been taken to the highest Court of Sports Arbitration in Switzerland by these same individuals and they have lost. FIFA is only bound by the decision of the Court of Arbitration for Sports AND DOES NOT ENTERTAIN OR TOLERATE decisions by local courts in footballing nations worldwide. Hence, FIFA has since upheld the decision of the Court of Arbitration on this matter and recognized the NFF Board led by Amaju Pinnick. Nigeria has a duty to comply with that decision. In addition, for the indiscretion of those individuals like Chris Giwa to approach the local courts, FIFA has since imposed a worldwide ban on them from all footballing activities.

The end result is that Chris Giwa and his so-called Board members do not have any locus standi with regards to footballing matters and the Federal Government CANNOT have any dealing with them on any footballing matter. The obvious implication of all these is that if any attempt is made to recognize Chris Giwa and derecognize Amaju Pinnick and his Board, FIFA WILL DEFINITELY IMPOSE A LENGTHY BAN ON NIGERIA from all football competitions locally and internationally and that will spell doom for Nigerian Football.

The immediate casualties of this ban would be (a) The Falconets who have qualified and are scheduled to participate in the Under-20 Female World Cup in July, 2018 (b) The final phases of the AFCON Qualifiers for the Super Eagles scheduled for August/September, 2018 (c) The Super Falcons defending their title in December in Ghana (d) No Nigerian Club side would be allowed to participate in the Continental Championships and (e) the future of all Nigerian players based in Nigeria would be in jeopardy as no Nigerian player would be allowed to be sold or transferred to any club anywhere in the world.

Please, find attached the latest letter from FIFA to Chris Giwa, through his lawyers confirming the position of FIFA on this matter.

(2)         In view of these facts above, our clients have taken steps to vacate the orders given by the Federal High Court in Jos. It should be noted that the said orders were given ex-parte (one-sided), as no other person was served with court processes. It should also be noted that the orders were given against Amaju Pinnick and his Board members (who are not parties to the case and were never served) and in favour of Chris Giwa (who is also not a party to the case). Besides, these orders are to last for only fourteen (14) days as provided by the Rules of Court. Our clients state these facts as they are in order to inform the public of the nature of the orders given without meaning to denigrate the authority of the court.

(3)         The Attorney-General of the Federation, Abubakar Malami, SAN, a few weeks ago, having studied the Supreme Court judgment has already advised (by a letter dated 13th June, 2018) that the matter is subjudice, and that Government cannot intervene at this point. He advised all parties to await the FINAL DETERMINATION of the case. However, in a desperate attempt to assume office at all cost, Chris Giwa sneaked back to court to obtain these ex-parte (one-sided) orders prompting the office of the Attorney-General to issue yet another advice again dated June 26, 2018, advising compliance to the court order.

(4)         Finally, our clients also urge restraint and caution because the substantive matter is pending in court and has not been fully determined. Our clients have also taken steps to set aside these orders. Therefore, it is important that the Government awaits the full and final determination of the entire matter. It may be the contention of Chris Giwa and his so-called Board that the Rule of Law must be obeyed which means an immediate enforcement of the one-sided (ex-parte) orders. However, Nigeria is also bound to abide, recognize and enforce the decisions of the Courts of Arbitration for Sports which have since dismissed the case of Chris Giwa and his so-called Board, and affirmed Amaju Pinnick and his Board as the authentic leadership of the NFF.

As a result of the CLEAR AND UNEQUIVOCAL position of FIFA on this issue, our clients urge the President to INSTRUCT the Minister of Sports to engage strong legal representation to challenge these court orders that were given without hearing from anyone or joining anyone on the other side (including the Minister of Sports).

Whilst this is being done, our clients urge the President to direct all parties and law enforcement agencies to await a full determination of the case before doing anything in this regard as a result of the decision of the Court of Arbitration for Sports which is also enforceable in Nigeria.

The final point to make is that our clients wish to draw the attention of everyone to the fact that the NFF is not an independent association. It is an affiliate of FIFA. By virtue of Article 59, Paragraphs 2 and 3 of FIFA Statutes, FIFA does not tolerate such actions taken by Giwa and his so-called Board to destroy Nigerian football.

Therefore, by virtue of the responsible position Nigeria holds in the Comity of Nations, it would be advisable that the President directs everyone to toe the line of FIFA and respect the final decision of the Court of Arbitration for Sports on this matter, instead of giving vent to the ambition of ONE MAN (Chris Giwa) who wants to bring down the entire edifice of football on all our heads to achieve his selfish ambition.