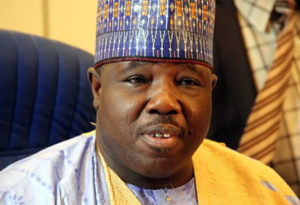 •We’ve not been sacked – Oladipo

A High Court of the Federal Capital Territory in Apo, Abuja on Wednesday sacked Ali Modu Sheriff as the Chairman of the Peoples Democratic Party.

Justice Valentine Ashi held that Sheriff’s ascension to office was unlawful as it was based on amended provision of the PDP Constitution illegally introduced in December 2014.

Though the court did not specifically mention Sheriff’s name, it made an order restraining all persons who became national officers of the party by virtue of the amended Article 47, Rule 6 of the party’s constitution from further parading themselves in the said capacities (national officers).

The judge nullified the amendment of the said provision of Article 47(6) of the party’s constitution which he ruled was done in violation of the mandatory provisions of Article 66 (2) and (3) of the same constitution.

The judge ruled, “The purported amendment of Article 47, Rule 6 of the PDP, 2012 at a Special Convention held on Wednesday and Thursday, 10 and 11 December, 2014, is unconstitutional, null and void as there was no compliance with mandatory provisions of Article 66 (2) and (3) of the same constitution.

“By reason of the above, the purported amendment of Article 47(6) introduced to the  PDP Constitution on the aforesaid dates, are hereby set aside.

Justice Ashi was delivering judgment in a suit filed by a member of the party in Irele Local Government Area of Ondo State, Chief Joseph Jero.

Only the PDP was the respondent to the suit.

The Article 47, Rule 6 of the party’s constitution was amended at a Special National Convention held on December 10 and 11, 2014.

The original provision provided that in the case of a vacancy, the executive committee of the party either at ward, state or national levels of the party, should appoint a caretaker or a chairman from the zone of the former holder of the office “pending the conduct of election.”

But the amended provision stipulates that the appointed caretaker or chairman should hold office “to serve the term of the (previous) officer.”

The amendment was made to validate the emergence of Adamu Mu’azu as the chairman of the party following the abrupt exit of his successor, Bamanga Tukur, in 2014.

But, upholding the plaintiff’s case on Wednesday, Justice Ashi held that the amendment of Article 47(6) of the party’s constitution was “illegal, null and void” as the process of amendment did not follow the mandatory procedure stipulated under Article 66(2) and (3) of party’s constitution.

By virtue of Article 66(3) of the party’s constitution, the National Secretary is also expected to notify state branches stating the details of the proposed amendment and the reasons for it at least one month to the national convention.

The judge held that the provisions were not complied with in the process of the amendment of Article 47(6) of the party’s constitution.

He dismissed the contention of the PDP’s lawyers, one of whom was Okere Kingdom, who had argued that the appointment of the party’s chairman was an internal affair of the party which the court should not dabble into.

But the judge explained that in as much as such issue was an internal affair of the party, the court had jurisdiction to determine whether the party followed its own constitution and regulations in the steps it took.

The plaintiff, Jero, had through his suit invoked the jurisdiction of the court to interpret sections 221(d) and 223 (1)(a) of the Nigerian Constitution, Article 47(6) of the PDP Constitution as well as section 85(3) of the Electoral Act with regard to the appointment of a caretaker or chairman of the party.

But Sheriff and Wale Oladipo have denied being sacked by the court’s judgment.

They said in a statement issued by Oladipo that the judgment was based on a mere amendment of the party constitution and that it did not affect their tenure in office.

The statement said, “Our attention has been drawn to reports circulating in the media that a Federal Capital Territory High Court has ousted the National Chairman of the PDP, Senator Ali-Modu Sheriff.

“This is completely false and a clear misrepresentation of the ruling of the court as it never gave any ruling ousting the national chairman.

“For the avoidance of doubt, the court only heard and delivered judgment on a matter concerning certain amendments in the PDP constitution, which has nothing to do with the election of Senator Ali Modu Sheriff as the national chairman or even that of his predecessor, Alhaji Adamu Mu’azu.

“Senator Ali Modu Sheriff was duly elected as the national chairman of the PDP. He still holds office as the National Chairman and has not been removed by any court.

“We therefore urge those misleading the media and the unsuspecting public to desist from such. The media is also urged to always cross-check their facts before going to press.”

But the National Caretaker Committee of the PDP has expressed satisfaction with  Thursday’s judgement, which sacked Sheriff and Oladipo as the national chairman and national secretary of the party, respectively.

Speaking on the court judgement, the caretaker committee advised Sheriff to retrace his steps and join hands with it to move the former ruling party forward.

The Secretary of the Caretaker Committee, Ben Obi, in an interview with journalists, described the judgement as a welcome development.

“We expect more positive court rulings in the days ahead in favour of our party. It is time for them to face the truth and retrace their steps,” Obi advised

He called on Sheriff and his supporters to stop their hard line posture and cooperate with the caretaker committee to move the party forward.

“We believe that truth must be upheld; we want all hands to be on deck to chart the way forward,” he added.