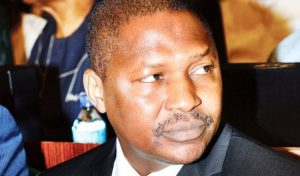 The Federal Government has started compiling the list of legislators in both chambers of the National Assembly over constituency projects earmarked for them in the 2014 and 2015 budgets, which were not executed.

The sum of N100bn was earmarked for constituency projects in each of the 2014 and 2015 budgets.

The worth of constituency projects totalled N200bn for the two years.

The Attorney General of the Federation and Minister of Justice, Mr. Abubakar Malami (SAN), told one of our correspondents on Sunday that the compilation was being done by the police, the Economic and Financial Crimes Commission and the Independent Corrupt Practices and other related offences Commission.

Though he declined to give details “in order not to pre-empt investigation,” the AGF said the funds, the names of legislators and the constituency projects that were not executed would be made public after investigation.

He said his office and the law enforcement agencies had received complaints of how payments were made for constituency projects that were never executed.

“If money is appropriated in the budget, paid and the projects the funds were meant for were not executed, it is only natural to take steps to find out what happened. If neither the money nor the project can be produced, then you must take steps in accordance with the law.

“There are cases that are specific; we are compiling them. I will not want to pre-empt investigation, we have to allow investigation to be concluded before we go public.”

When asked which of EFCC or ICPC was involved in probing the constituency project fraud, the minister responded, “including the police”.

One of our correspondents learnt that the AGF had received petitions against many of the federal legislators, including a former Chairman, House Committee on Appropriation, Mr. Abdulmumin Jibrin.

Jibrin had also petitioned the EFCC, ICPC, the police and the Department of State Services, alleging that the Speaker of the House of Representatives, Mr. Yakubu Dogara, and three other principal officers had requested the inclusion of N40bn projects in the 2016 budget, besides other projects in sums ranging from N20bn to N30bn.

However, some lawmakers, who spoke to The PUNCH on Sunday, stated that ministries, departments and agencies under the executive were responsible for the execution of constituency projects.

They explained that lawmakers only identified projects, put them in the national budget, while the MDAs execute them after the president had approved the budget.

The representative of the Oyo South senatorial district at the Senate, Senator Adesoji Akanbi, said any probe into the constituency projects should start from the executive.

He said, “There is a certain amount set aside for constituency projects. Each lawmaker is allocated a certain amount of money and they will identify the projects of their choice. But the execution by contractors has nothing to do with lawmakers. The main role we play is to name the project and make sure that the project is executed.”

When he was asked if it was possible for a lawmaker to influence the selection of the contractor and the execution of the project, Akanbi said, “That means the ministry or the agency handling the project has been compromised.’’

Akanbi, however, said lawmakers could be culpable in the manipulation because they had to certify that the job had been done before the contractor could be paid.

Senator George Sekibo, who is recontesting his election in the Rivers-East senatorial district, also said the projects included in any budget passed by the National Assembly were executed by the MDAs.

The legistlator, who has been in the Senate since 2007, stated that lawmakers were not involved in the execution of constituency projects.

He said, ‘‘Nobody gives a kobo to any senator for constituency project. All a senator does is to recommend a project for his constituency.”

The House also said the role of lawmakers in constituency projects was limited to the selection of the projects, while relevant MDAs carried out the implementation.

It also said no member was handed cash or paid money for the implementation of the projects.

The Chairman, House Committee on Media and Public Affairs, Mr. Abdulrazak Namdas, said, “Members do not execute constituency projects, and they don’t receive money for the projects.

“For example, a health centre will naturally be done by the Ministry of Health or any agency so designated by the executive to handle the project. It is not the member who implements the project or appoints the contractors.”

Civil rights groups, which spoke to The PUNCH, supported the probe.

He  said, “The idea is an organised fraud driven by the mostly ignoble men and women who have serially foisted themselves on Nigeria and Nigerians as their lawmakers, but with no intentions of making laws that would engineer  national development beyond advancing a cause for themselves via phoney loopholes in the system.”

Also, the Executive Secretary of The Anti-Corruption Network, Ebenezer Oyetakin, urged the Federal Government to carry out a thorough probe.

“The constituency projects have become an avenue for the members of the National Assembly to recoup the outrageous money spent to run elections and to feed their corruption nest rather than serving the purpose they are defined to serve,” he added.

The President of Campaign for Democracy, Bako Usman, said, “This will create more synergy between the executive and the legislature, and even the judiciary. When it comes to budget harmonisation and implementation, issues like padding will no longer occur.”

The National Publicity Secretary of Afenifere, Yinka Odumakin, advised the government to limit access to money by public officials.

He said, “The government should start institutional reforms that will ensure that people don’t have access to that kind of money again.’’

Efforts to get the reaction of the Senate’s spokesperson, Senator Sani Abdullahi, proved abortive as his mobile phone rang out. He had yet to reply to a text message sent to him.