Chuba Wilberforce Okadigbo (December 17, 1941 – September 25, 2003), was President of the Senate of Nigeria. He was sometimes referred to as Oyi of Oyi in reference to his local government council area (Oyi); he also held numerous political positions in the Nigeria government. He was a philosopher, academic, political scientist, and writer. He was known to be opposed to the ruling Peoples Democratic Party of Nigeria, which was led by President Olusẹgun Ọbasanjọ from the year 1999 – 2007. 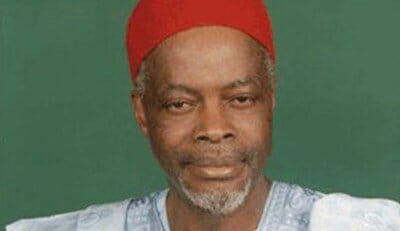 Between 1975 and 1978, he became director-general Center for Interdisciplinary and Political Studies, and a lecturer in philosophy University of Nigeria, Nsukka. He also became a professor of philosophy Bigard Memorial Senior Seminary [Roman Catholic Mission] in Enugu State.

In 1979, at the age of 37 he was appointed as the Political Adviser and strategist to then president, Shehu Shagari. In the third republic he belonged to the Peoples Front which joined the Social Democratic Party under the leadership of Shehu Musa Yar’Adua together with politicians such as Atiku Abubakar, Babagana Kingibe, Abdullahi Aliyu Sumaila, Sunday Afolabi and Rabiu Kwankwaso.He was a member of the Peoples Democratic Movement (PDM) during the Sani Abacha transition program. At the dawn of the fourth republic, He was elected into the National Assembly (Anambra North) and was favorite to be the Senate President at the commencement of the democratic government in the Fourth Republic. However, due to Chuba’s disharmony with the executive arm, Evan Enwerem was voted in by the senate with the support of the executive arm. However, he inevitably became President of the Nigerian Senate, after the impeachment of Evan Enwerem due to corrupt practices. On Friday 2 June 2000 the Police lay siege to his official residence in an operation to seize the Senate Mace from him but failed. Later on in 2000, he was falsely charged for corruption and impeached, officially demoting him from Senate President to a senator. 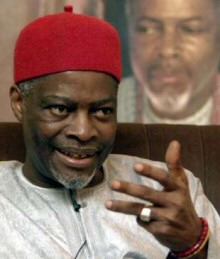 In 2002 Okadigbo decamped to the All Nigeria Peoples Party to become Muhammadu Buhari’s running mate in the 2003 Presidential elections,[5][6] but lost to the People’s Democratic Party’s candidate, Olusẹgun Ọbasanjọ and his running mate, Atiku Abubakar by a landslide victory. Because of possible mass rigging, his party later took the matter to the supreme court that year.

A day after campaigning in Kano State, he died in Abuja due to breathing problems; on September 25, 2003. Though, some people around Nigeria questioned whether or not the tear gas used during the rally was poisonous.

Okadigbo is survived by his wife Margery, who also became a senator in 2015, elected into the 8th National Assembly representing Anambra North, a position Chuba held; making Chuba and Margery the only married couple to have achieved this feat. Chuba is blessed with children.