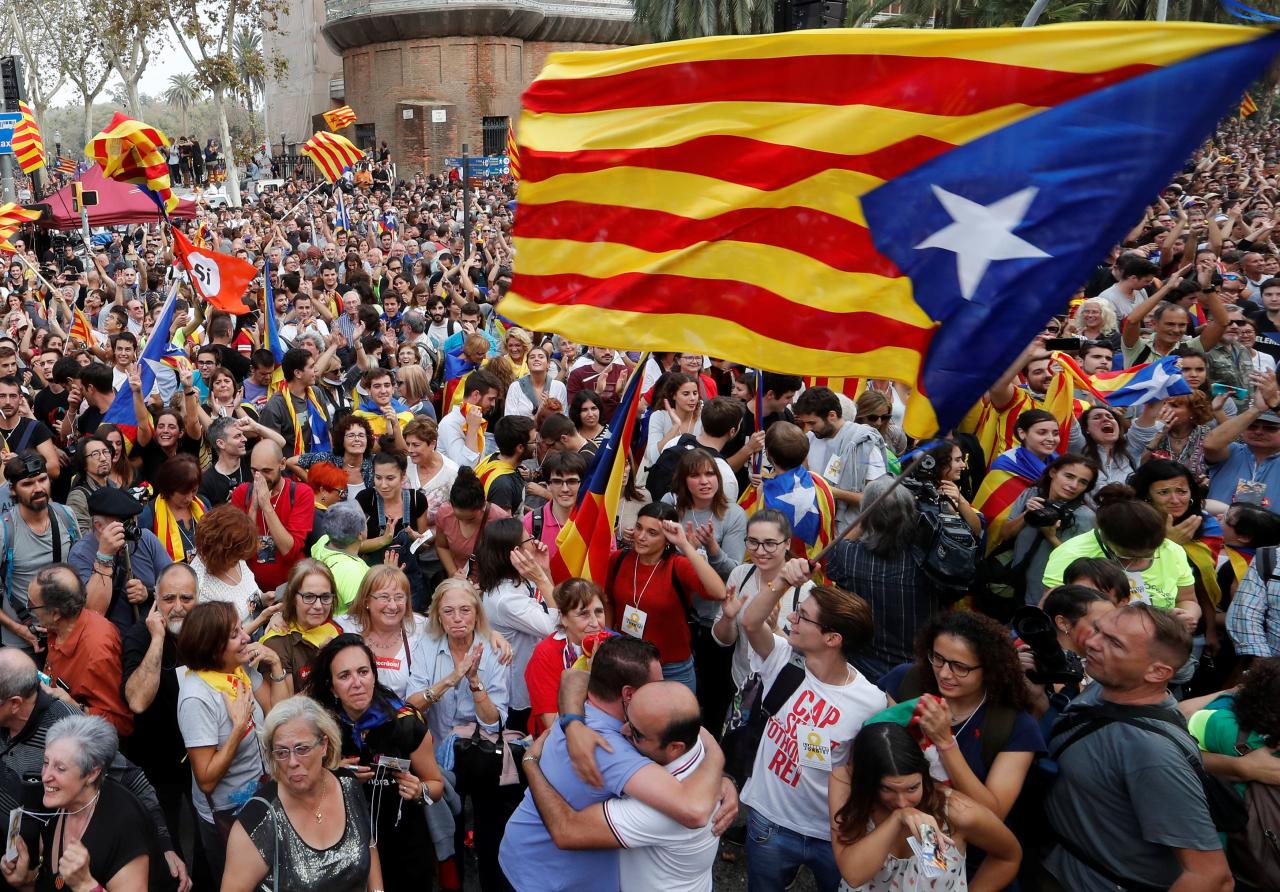 Catalan lawmakers voted Friday to declare independence from Spain, as Madrid vowed in turn to “restore legality” and quash the region’s secessionist bid.

With thousands of pro-independence activists gathered outside, the regional parliament in Barcelona passed a resolution to “declare Catalonia an independent state in the form of a republic”.

“The rule of law will restore legality in Catalonia,” he tweeted immediately after controversial vote.

Under the eyes of a nervous nation, Catalonia’s regional parliament held a secret ballot, despite an opposition walkout, on a resolution the region´s authorities have no legal power to execute.

The motion was approved with 70 votes in favour, 10 against and two abstentions, a result that immediately saw Spanish shares fall sharply.

– ‘Dark day for democracy’ –
Catalan opposition MPs, refusing to even consider the resolution, walked out en masse on what one described as a “dark day” for democracy.

But those who stayed behind, cheered, clapped and embraced before breaking out in the Catalan anthem as the tally was announced.

Shortly before the Catalan vote, Rajoy urged lawmakers to give him the power to dismiss Catalonia’s secessionist leader Carles Puigdemont, his deputy, and all regional ministers.

If approved, the measures under Article 155 of the constitution, designed to rein in rebels among Spain´s 17 regions, would enter into force on Saturday — effectively leaving Puigdemont and his team out in the cold.

Puigdemont had opted Thursday not to call elections for a new regional parliament, considered by many to have been the only way to prevent Madrid’s power grab.

Instead, he left it up to the regional parliament “to determine the consequences” of the threatened takeover — thus leaving the door open for Friday´s independence push.

Roughly the size of Belgium, the semi-autonomous northeastern region accounts for about 16 percent of Spain’s population and a fifth of its economic output.

Resentment to Madrid’s perceived interference has been growing for years, culminating in an October 1 independence vote deemed illegal by the central government and courts.

But while fiercely protective of their language, culture and autonomy — restored at the end of the 1939-1975 dictatorship of Francisco Franco — Catalans are deeply divided on independence.

Catalan authorities said 90 percent voted “Yes” in the unregulated plebiscite held up by secessionist leaders as a mandate for independence for the wealthy region of 7.5 million people.

‘The Republic awaits’
Only about 43 percent of voters turned out, however, with many anti-secessionists staying away and others prevented from casting their ballot by Spanish police in a crackdown that turned violent.

Based on the vote, Puigdemont threatened to declare an independent republic.

Madrid responded by turning to Article 155.

The senate, in which Rajoy´s Popular Party holds a majority, was set to adopt measures under the article later Friday to depose Catalonia´s secessionist executive and take control of its civil service, police, finances, and public media.

The measures would remain in place until elections for a new regional parliament, though Puigdemont warned Thursday that a takeover from Madrid would escalate the crisis.

Rajoy sought to place the blame for Spain’s worst political crisis in decades squarely on the shoulders of the separatists.

The Article 155 measures were not aimed against the people of the region, he insisted, but “to prevent abuse of Catalonia” by its own leaders.

As lawmakers argued inside the Catalan parliament, thousands of activists gathered outside under the banner: “The Republic awaits, let’s defend it.”

Some sported pro-independence banners, others waved the red-and-yellow Catalan flag to send a message to lawmakers.

There was protest inside the building too, with about 200 separatist mayors, in full regalia, chanting “Independence”, until being silenced.

Regional representatives of Rajoy’s conservative Popular Party, left the Spanish and Catalan flags behind on their seats when they stormed out with other opposition MPs.