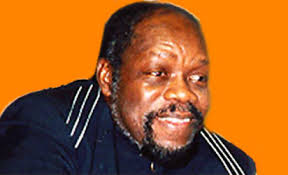 Chief Chukwuemeka Odumegwu Ojukwu (4 November 1933 – 26 November 2011) was a Nigerian military officer and politician who served as the military governor of the Eastern Region of Nigeria in 1966 and the leader of the breakaway Republic of Biafra from 1967 to 1970. He was active as a politician from 1983 to 2011, when he died aged 78.

Chukwuemeka “Emeka” Odumegwu-Ojukwu was born on 4 November 1933 at Zungeru in northern Nigeria to Sir Louis Odumegwu Ojukwu, an Igbo businessman from Nnewi, Anambra State in south-eastern Nigeria. Sir Louis was in the transport business; he took advantage of the business boom during World War II to become one of the richest men in Nigeria. He began his educational career in Lagos, southwestern Nigeria.

Emeka Ojukwu started his secondary school education at CMS Grammar School, Lagos aged 10 in 1943. He later transferred to King’s College, Lagos in 1944 where he was involved in a controversy leading to his brief imprisonment for humiliating a white British colonial teacher who assaulted a black woman. This event generated widespread coverage in local newspapers. At 13, his father sent him overseas to study in the United Kingdom, first at Epsom College and later at Lincoln College, Oxford University, where he earned a master’s degree in History. He returned to colonial Nigeria in 1956.

Ojukwu joined the civil service in Eastern Nigeria as an Administrative Officer at Udi, in present-day Enugu State. In 1957, after two years of working with the colonial civil service and seeking to break away from his father’s influence over his civil service career, he left and joined the military initially enlisting as a non-commissioned officer (NCO) in Zaria.

Ojukwu’s decision to enlist as an NCO was forced by his father’s (Sir Louis) pulling of political strings with the then Governor-General of Nigeria (John Macpherson) to prevent Emeka from getting an officer-cadetship. Sir Louis and Governor-General Macpherson believed Emeka would not stick to the grueling NCO schedule however Emeka persevered. It wasn’t until an embarrassing situation between Emeka and a drill sergeant named Fort-Lamy wherein Emeka corrected the Sergeant’s mispronunciation of the safety catch of the Lee-Enfield .303 rifle that the British Depot Commander recommended Emeka for an officer’s commission.

From Zaria, Emeka proceeded first, to the Royal West African Frontier Force Training School in Teshie, Ghana and next, to Eaton Hall where he received his commission in March 1958 as a 2nd Lieutenant. 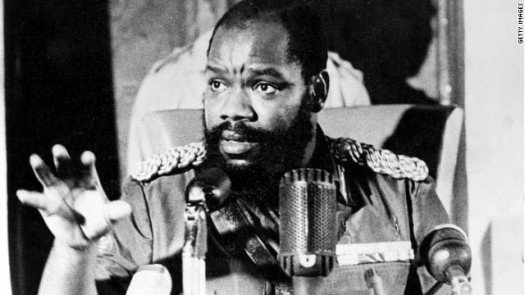 He was one of the first and few university graduates to receive an army commission. He later attended Infantry School in Warminster, the Small Arms School in Hythe. Upon completion of further military training he was assigned to the Army’s Fifth Battalion in Kaduna.

At that time, the Nigerian Military Forces had 250 officers and only 15 were Nigerians. There were 6,400 other ranks, of which 336 were British. After serving in the United Nations’ peacekeeping force in the Congo, under Major General Johnson Thomas Aguiyi-Ironsi, Ojukwu was promoted to Lieutenant-Colonel in 1964 and posted to Kano, where he was in charge of the 5th Battalion of the Nigerian Army. 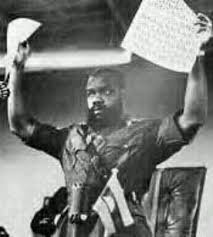 1966 coups and events leading to the Nigerian Civil War

Lieutenant-Colonel Ojukwu was in Kano, northern Nigeria, when Major Patrick Chukwuma Kaduna Nzeogwu on 15 January 1966 executed and announced the bloody military coup in Kaduna, also in northern Nigeria. It is to Ojukwu’s credit that the coup lost much steam in the north, where it had succeeded. Lt. Col. Odumegwu-Ojukwu supported the forces loyal to the Supreme Commander of the Nigerian Armed Forces, Major-General Aguiyi-Ironisi. Major Nzeogwu was in control of Kaduna, but the coup had failed in other parts of the country.

By 29 May 1966, there was a pogrom in northern Nigeria during which Nigerians of southeastern Nigeria origin were targeted and killed. This presented problems for Odumegwu Ojukwu. He did everything in his power to prevent reprisals and even encouraged people to return, as assurances for their safety had been given by his supposed colleagues up north and out west.

On 29 July 1966, a group of officers, including Majors Murtala Muhammed, Theophilus Yakubu Danjuma, and Martin Adamu, led the majority Northern soldiers in a mutiny that later developed into a “Counter-Coup” or “July Rematch”. The coup failed in the South-Eastern part of Nigeria where Ojukwu was the military Governor, due to the effort of the brigade commander and hesitation of northern officers stationed in the region (partly due to the mutiny leaders in the East being Northern whilst being surrounded by a large Eastern population).

The Supreme Commander General Aguiyi-Ironsi and his host Colonel Fajuyi were abducted and killed in Ibadan. On acknowledging Ironsi’s death, Ojukwu insisted that the military hierarchy be preserved. In that case, the most senior army officer after Ironsi was Brigadier Babafemi Ogundipe, should take over leadership, not Colonel Gowon (the coup plotters choice), however the leaders of the counter-coup insisted that Colonel Gowon be made head of state. Both Gowon and Ojukwu were of the same rank in the Nigeria Army then (Lt. Colonel). Ogundipe could not muster enough force in Lagos to establish his authority as soldiers (Guard Battalion) available to him were under Joseph Nanven Garba who was part of the coup, it was this realisation that led Ogundipe to opt out. Thus, Ojukwu’s insistence could not be enforced by Ogundipe unless the coup ploters agreed (which they did not). The fall out from this led to a stand off between Ojukwu and Gowon leading to the sequence of events that resulted in the Nigerian civil war.

In January 1967, the Nigerian military leadership went to Aburi, Ghana, for a peace conference hosted by General Joseph Ankrah. The implementation of the agreements reached at Aburi fell apart upon the leaderships return to Nigeria and on 30 May 1967, as a result of this, Colonel Odumegwu-Ojukwu declared Eastern Nigeria a sovereign state to be known as BIAFRA:

“Having mandated me to proclaim on your behalf, and in your name, that Eastern Nigeria be a sovereign independent Republic, now, therefore I, Lieutenant Colonel Chukwuemeka Odumegwu-Ojukwu, Military Governor of Eastern Nigeria, by virtue of the authority, and pursuant to the principles recited above, do hereby solemnly proclaim that the territory and region known as and called Eastern Nigeria together with her continental shelf and territorial waters, shall, henceforth, be an independent sovereign state of the name and title of The Republic of Biafra.”

On 6 July 1967, Gowon declared war and attacked Biafra. For 30 months, the war raged on. During the war in addition to the Aburi (Ghana) Accord that tried to avoid the war, there was also the Niamey (Niger Republic) Peace Conference under President Hamani Diori (1968) and the OAU sponsored Addis Ababa (Ethiopia) Conference (1968) under the Chairmanship of Emperor Haile Selassie. This was the final effort by General Ojukwu and General Gowon to settle the conflict at the Conference Table. Even though General Gowon, promised “No Victor, No Vanquished,” the Igbos were not only defeated but felt vanquished.

After three years of non-stop fighting and starvation, a hole did appear in the Biafran front lines and this was exploited by the Nigerian military. As it became obvious that all was lost, Ojukwu was convinced to leave the country to avoid his certain assassination. On 9 January 1970, General Odumegwu-Ojukwu handed over power to his second in command, Chief of General Staff Major-General Philip Effiong, and left for Ivory Coast, where President Félix Houphouët-Boigny – who had recognised Biafra on 14 May 1968 – granted him political asylum.

There was one controversial issue during the Biafra war, the killing of some members of the July 1966 alleged coup plot and Major Victor Banjo. They were executed for alleged treason with the approval of Ojukwu, the Biafran Supreme commander. Major Ifejuna was one of those executed.

After 13 years in exile, the Federal Government of Nigeria under President Shehu Aliyu Usman Shagari granted an official pardon to Odumegwu-Ojukwu and opened the road for a triumphant return in 1982. The people of Nnewi gave him the now very famous chieftaincy title of Ikemba (Strength of the Nation), while the entire Igbo nation took to calling him Dikedioramma (“beloved hero of the masses”) during his living arrangement in his family home in Nnewi, Anambra. His foray into politics was disappointing to many, who wanted him to stay above the fray. The ruling party, NPN, rigged him out of the senate seat, which was purportedly lost to a relatively little known state commissioner in then Governor Jim Nwobodo’s cabinet called Dr. Edwin Onwudiwe. The second Republic was truncated on 31 December 1983 by Major-General Muhammadu Buhari, supported by General Ibrahim Badamosi Babangida and Brigadier Sani Abacha. The junta proceeded to arrest and to keep Ojukwu in Kirikiri Maximum Security Prison, Lagos, alongside most prominent politicians of that era. Having never been charged with any crimes, he was unconditionally released from detention on 1 October 1984, alongside 249 other politicians of that era—former Ministers Adamu Ciroma and Maitama Sule were also on that batch of released politicians. In ordering his release, the Head of State, General Buhari said inter alia: “While we will not hesitate to send those found with cases to answer before the special military tribunal, no person will be kept in detention a-day longer than necessary if investigations have not so far incriminated him.” (WEST AFRICA, 8 October 1984)

After the ordeal in Buhari’s prisons, Dim Odumegwu-Ojukwu continued to play major roles in the advancement of the Igbo nation in a democracy because

“As a committed democrat, every single day under an un-elected government hurts me. The citizens of this country are mature enough to make their own choices, just as they have the right to make their own mistakes”.

Ojukwu had played a significant role in Nigeria’s return to democracy since 1999 (the fourth Republic). He had contested as presidential candidate of his party, All Progressives Grand Alliance (APGA) for the last three of the four elections. Until his illness, he remained the party leader. The party was in control of two states in and largely influential amongst the Igbo ethnic area of Nigeria.In June 1989,

Ojukwu married Bianca Onoh (Former Miss Nigeria and Nigeria’s Ambassador to the kingdom of Spain in 1994. The couple had three children Afamefuna, Chineme and Nwachukwu.

On 26 November 2011, Ikemba Odumegwu Ojukwu died in the United Kingdom after a brief illness, aged 78. The Nigerian Army accorded him the highest military accolade and conducted a funeral parade for him in Abuja, Nigeria on 27 February 2012, the day his body was flown back to Nigeria from London before his burial on Friday, 2 March. He was buried in a newly built mausoleum in his compound at Nnewi. Before his final interment, he had about the most unusual and elaborate weeklong funeral ceremonies in Nigeria besides Chief Obafemi Awolowo, whereby his body was carried around the five Eastern states, Imo, Abia, Enugu, Ebonyi, Anambra, including the nation’s capital, Abuja. Memorial services and public events were also held in his honour in several places across Nigeria, including Lagos and Niger State, his birthplace, and as far away as Dallas, Texas, United States. His funeral was attended by President Goodluck Jonathan of Nigeria and ex President Jerry Rawlings of Ghana among other personalities.