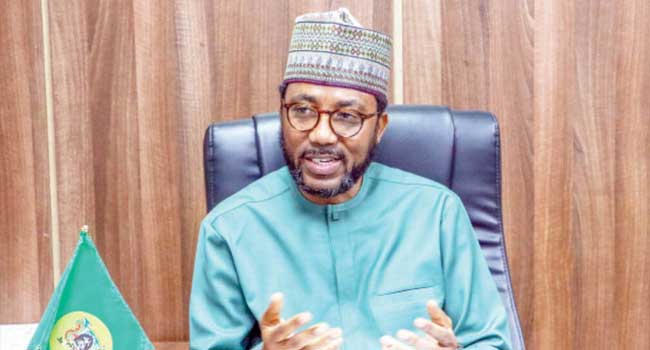 President Muhammadu Buhari of Nigeria has approved of the appointment of a new substantive Managing Director for the Nigerian Ports Authority (NPA), Mohammed Bello-Koko.

Before this latest appointment, Mohammed Bello-Koko was Executive Director, Finance and Administration of the NPA. He was made the Acting Managing Director of NPA on May 6 2021 when Hadiza Bala Usman was asked to hand over to the most senior Executive Director after her suspension on the grounds of insubordination and other offences, nine months ago.

Mohammed Bello-Koko was born on March 25, 1969 in Koko-Besse Local Government Area of Kebbi state. He attended the Federal Government College, Sokoto where he acquired his secondary education and got a B.SC degree in Management Studies from the University of Sokoto. He obtained a Master’s degree in Business Administration (MBA) in 1995 from the Usman Danfodio University, Sokoto. His banking career started with FSB International Bank PLC in Port Harcourt, Rivers State in 1996 as an Executive Trainee, from where he stepped up the ladder to several positions including Banking Officer-Credit and later, Senior Banking Officer, Senior Treasury Officer, Senior Banking Officer-Energy Sector (ENSEC) in charge of managing various oil and gas-related multinational accounts and sub-contractors.

He was also Assistant Manager (Credit and Marketing) and Head, branch credit risk analyst and eventually deputy manager of his branch.

In 2005, he joined Zenith bank as a Manager and Team Head, Public sector and Large corporate. From there, he upgraded to the position of Senior Manager and Head of Public Sector banking; Assistant General Manager/ Zonal Head for Public Sector and Zonal Head in charge of branches under the Rivers/Bayelsa zone of the bank before he became Deputy General Manager and Zonal Head which made him a member of the bank’s Executive Management team which he held from 2013 to 2015 when he was appointed the Executive Director, Finance and Administration of the Nigerian Ports Authority (NPA).

Recently, during a facility assessment tour of the Onne and Rivers Ports, Mohammed Bello-Koko stated that a good way to fast-track the country’s economic development was by building a modern and resilient port infrastructure as it would bring about good paying jobs and aid in sustaining peace across the country.

He went on to assure them of the resolve of the Nigerian Ports Authority to improve service and quality delivery at the Eastern ports in other to serve as competitive substitutes to the ports in Lagos.

At that time, Mohammed Bello-Koko gave the assurance that the supervising Ministry of the NPA was working with relevant agencies with a view to reducing clearance time of imports and cost of handling the non-oil exports in order to complement the economic diversification agenda of the Federal Government.