Social media followers are important to every celebrity because it indirectly dictates how long they would last and how far their content would go.

This of course applies to Big Brother Naija ex-housemates, and while some of them have been on the low since they got out of the show in different years, others are thriving with increasing fanbases.

In a tweet put up by @Iam_ChriaAustin, the top two ex-housemates with the highest number of followers are 2020 winner, Laycon, and 2017 first runner-up, Bisola Aiyeola with 3 million followers each.

They are closely followed in 2nd place by 2018 ex-housemate, Alex Unusual with 2.9 million followers. Cee-c and Mercy Eke hold 3rd and 4th position with 2.7 million and 2.4 million followers respectively. 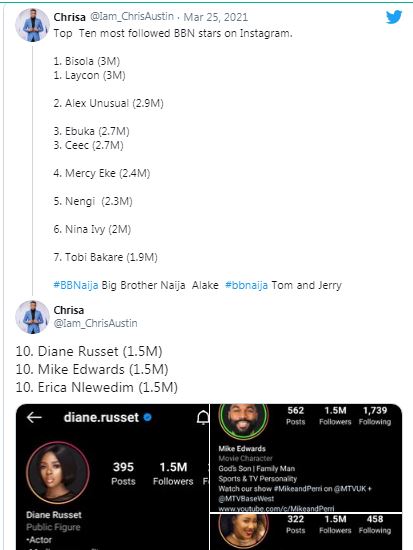 Meanwhile, Legit.ng earlier reported how Laycon reached one million followers on his Instagram page, a feat that had never been achieved before.

What made his number of followers extra special was that he was able to reach the milestone while still in the BBNaija house as a contestant.

Laycon reportedly had a little over 3000 followers when he first joined the reality show but his ratings quickly grew among fans and many of them followed his Instagram page.