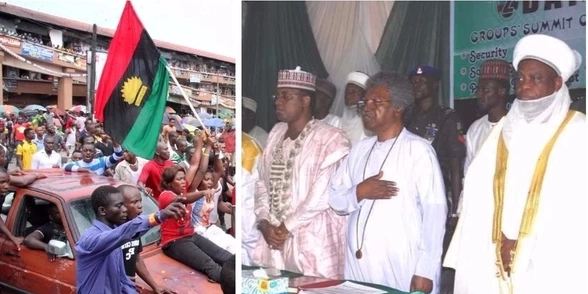 The Northern Elders Forum have bashed the violent agitators in the southeast, describing them as misguided elements who threatened the rest of the country

The Northern Elders Forum (NEF) has reacted to the recent development in the southeast when members of the Indigenous Peoples of Biafra (IPOB) agitating for a sovereign Biafran state, clashed with soldiers of the Nigerian army and allegedly carried out attacks against northerners.

According to Vanguard, the group made its comments at a news conference in Abuja on Thursday, September 21.

NAIJ.com gathers that the forum’s president, Dr. Paul Unongo, stated that the development was instigated by ‘misguided elements’ who threatened the rest of Nigeria.

He stated: “It is with considerable disquiet, therefore, that the NEF has witnessed the recent developments in Nigeria, which have tilted towards subversion of the Nigerian State and violation of the principles and tenets of the rule of law and the protection of the lives and dignity of all Nigerians.

“These developments have primarily been triggered by some misguided elements of our country who have apparently harassed, threatened and intimidated the rest of the country. “The recent unprovoked attacks against Northerners in some states in the south-east and south-south of Nigeria pose an existential threat to the entire country.

“NEF notes and commends the restrained and mature reaction of the northern leadership represented by the 19 northern state governors, senators, members of the House of Representatives and state assemblies, traditional rulers, religious leaders, community associations, politicians, elders, coalition of youth groups and the millions of citizens of Nigeria from the north who recognized the value of peace, and did not respond against the people from the states from where killings and recent atrocities were perpetrated against northerners.”

Meanwhile, NAIJ.com previously reported that the federal government’s decision to proscribe the Indigenous People of Biafra (IPOB) received the backing of the Northern Elders Forum (NEF).

The forum in a statement on Thursday, September 21, in Abuja, said the government’s decision to ban the group was necessary to stamp out emerging terrorism in the southeast.