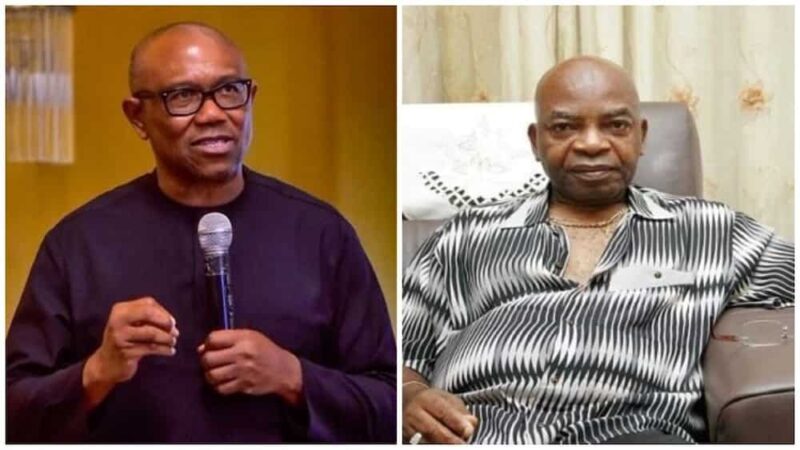 Anambra born oil magnate and billionaire, Chief Arthur Eze, has re-enacted his support by throwing his weight behind the presidential candidate of the Peoples Democratic Party (PDP), Alhaji Atiku Abubakar and his running mate, Senator Ifeanyi Okowa in the oncoming general election in February 2023.

Speaking, during his solidarity visit to the Director General of the PDP Presidential Campaign Committee, Prof Obiora Okonkwo, in his country home at Ogidi, Idemili North Local Government Area of Anambra State, Chief Eze stated that Atiku Abubakar remained an honest and liberal pan-Nigerian who wants the best for the country.

He called on Nigerians in the southeast to give Atiku Abubakar every support in their power in the oncoming election, in order to strengthen their strategic relationship with the north.

He reiterated that the long term relationship between the southeast and the north has continued to bring about lots of political goodwill to the region.

His words: ‘My appeal is for our people to seize the opportunity provided by Atiku Abubakar to renew the age-old alliance between the Southeast and the North; we have accomplished far more in this country’s politics through our alliance with the North.’

‘This alliance saw Nnamdi Azikiwe become President of Nigeria in the First Republic and Alex Ekwueme served as Vice President, while Edwin Ume-ezeoke was elected Speaker of the House of Representatives in the Second Republic,’ he said.

He maintained that the best way to have a president from the southeast, was to allow Atiku Abubakar become the next president in 2023.

He further stated: ‘Atiku has demonstrated his love and concern for us ndi-Igbo by continuously choosing an Igbo man to be his running mate since 2007 when he picked Sen. Ben Ndi Obi; Peter Obi in 2019 and now, Ifeanyi Okowa, an Igbo man from Delta State.’

‘He was willing to scale back his ambition if the ticket was micro-zoned to the Southeast; only Atiku Abubakar agreed to such terms.’

‘He will deliver on his promise of restructuring the country and ensuring that a Southerner succeeds him as president’, the billionaire stated.

On his part, Prof Obiora Okonkwo lauded Eze, not just for throwing his weight behind Atiku, but also, for engaging in several advocacy efforts towards the Atiku project as it had already made great impacts in the southeastern part of the country.

He maintained that the PDP was fully committed to garnering majority votes for the Atiku-Okowa train in Anambra state.

Recall that Prince Arthur Eze clearly stated, during the 2022 Ofala Festival of the traditional ruler of Ukpo in Dunukofia Local Government Area of Anambra state, that he was not in support of the presidential bid of Labour Party candidate, Mr Peter Obi and had in fact, advised him to step down from the race.

His words: ‘I warned Peter Obi to withdraw from this race but he would not listen. I told him plainly that I am not part of his plans. I told him to drop his ambition, and wait for next time.’

‘When he told me about his ambition, I asked him the states he thinks he can win in the west and in the north – he told me; but I was not convinced. I told him he cannot not win; so that he would not waste his time and money’, he stated.