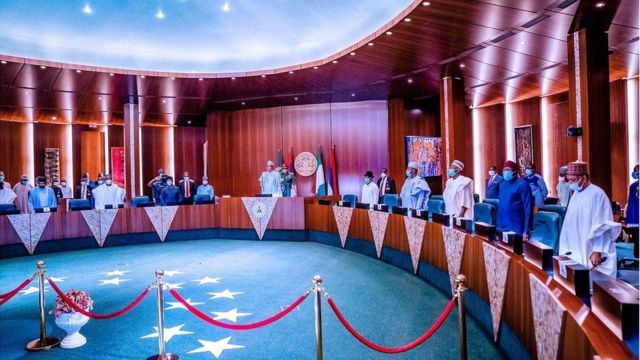 By Uche Amunike
The All Progressive Congress (APC) National Executive Council (NEC) meeting, Wednesday, transferred power to the Abdullahi Adamu-led National Working Committee to last for 90 days, specifically July 2022.
Speaking to delegates at the 11th APC NEC meeting held at Transcorp Hilton, Abuja, the Party’s Secretary, Dr Iyiola Omisore, made this disclosure while explaining that the transfer of power will enable the National Working Committee to be at liberty to make decisions that would ordinarily require the approval of the NEC for the next 90 days.
According to him, the motion was moved by the Senate President, Dr Ahmed Lawan and seconded by Kaduna State Governor, Nasir el-Rufai.
He also stated that the APC NEC meeting was the first to be held in conjunction with the newly-inaugurated National Working Committee, adding that the process will begin by uniting all aggrieved members and also discussing upcoming elections.
The APC NEC meeting is actually the first to be held after the much-anticipated National Convention which took place on March 26 where the Mai Mala Buni-led Caretaker and Extraordinary Convention Planning Committee was dissolved, allowing for a new leadership to be sworn in by the President.
He called on members to be at their best behaviours worthy of emulation, stressing that the party’s major problems are mainly caused by ego, reiterating that various ego within the party aided and widened the gap between former and serving governors. This, he said, brings about a risk of creating a divide in the party and allowing members to suffer.
He enjoined members to help fight the present problems witnessed in the party as there was no need for the competition, while calling on the serving governors to work in tandem with their former governors, some of whom are not Senators, with mutual respect, so as to resolve many of the present challenges.
He advised them to make their new watchword, ‘APC First’, while promising that the National Working Committee will work better with a united front, noting that the party emerged stronger in spite of predictions made by people about their dissolution.
He concluded by urging members to avoid using the media to settle grievances but rather use constitutional provisions provided by the party for dispute resolution.
Nigerian President, General Muhammadu Buhari was in attendance at the APC NEC Meeting. He was also joined by his Deputy, Professor Yemi Osinbajo, as well as other members of the National Working Committee, Board of Trustees and State Governors. Speaker of the House of Representatives, Femi Gbajabiamila, other principal officers of the National Assembly and state party Chairman.
APC Chieftain, Asiwaju Bola Tinubu was however, absent at the NEC meeting.
According to his Media Aide, Tunde Rahman, the Presidential hopeful was absent because he’s not a member of the organ of the APC.
While addressing newsmen, Rahman explained that the APC constitution does not permit Tinubu to be in attendance at the APC NEC meeting.
Hear him: ‘Asiwaju is not a member of NEC. He is a member of the National Caucus. Members of NEC are the President, Vice President, Senate President, Speaker, State Chairman of the party and members of the national executives of the party’, he explained.
QUICK SHARE: