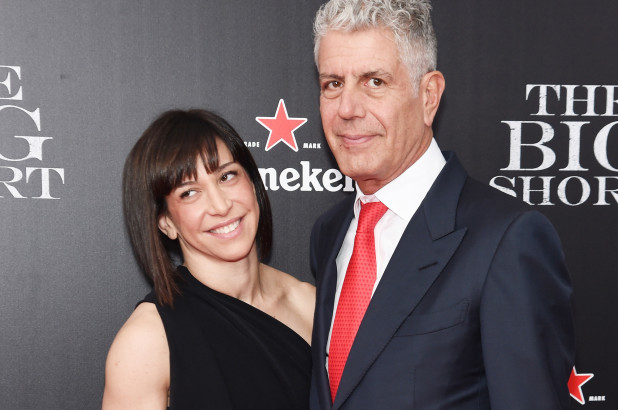 Although Anthony Bourdain and his estranged wife Ottavia Busia separated in 2016, their divorce was not finalized before his sudden death last Friday.

According to sources, Bourdain’s remains will be transported to the United States for his funeral without delay as soon as his next of kin makes their wishes known to authorities. Since their divorce was not finalized, Busia, who is mom to their daughter Ariane, 11, is still legally his next of kin.

“We are only awaiting the wishes of the family,” Pascal Lohr, Mayor of Kayserberg-Vignobles tells PEOPLE. “Everything then will be done as quickly as possible.”

The former couple—who married in 2007—opened up about their splitshortly after the news broke in September 2016. “My wife and I live, have lived, very separate lives for years,” Bourdain told PEOPLE at the time. “There’s no drama here. We get along really, really well and it’s not a big lifestyle change happening here.”

Busia also said: “Because of professional decisions we both have made, my husband and I have been for years in an unconventional relationship. Nothing has changed. We love each other. We respect the decisions the other has made. And we’ll always consider ourselves a family.”

Bourdain began dating Asia Argento shortly after the news of his split from Busia, and he recently told PEOPLE although he’d never marry again, he “wouldn’t hate” moving in with the Italian actress.

“Look, I like being around her as much as possible,” he said.

The Parts Unknown host collaborated with Argento on his show—and said their personalities and lifestyles are similar. “She’s like me, in a lot of ways. We’ve both been married twice,” he said. “So that’s not something that’s ever, ever going to happen.”

He added: “That’s the death of everything. I think we both respect each other’s work. Nobody’s ever going to say, ‘Oh, but you promised we  were going to go to the beach.’ No, you know, you get a gig, that’s it. That’s it. Nothing else matters. Work first.”

Following the news of Bourdain’s death, Argento, 42, released a statement on social media.

“Anthony gave all of himself in everything that he did,” she wrote on Twitter. “His brilliant, fearless spirit touched and inspired so many, and his generosity knew no bounds. He was my love, my rock, my protector. I am beyond devastated.”