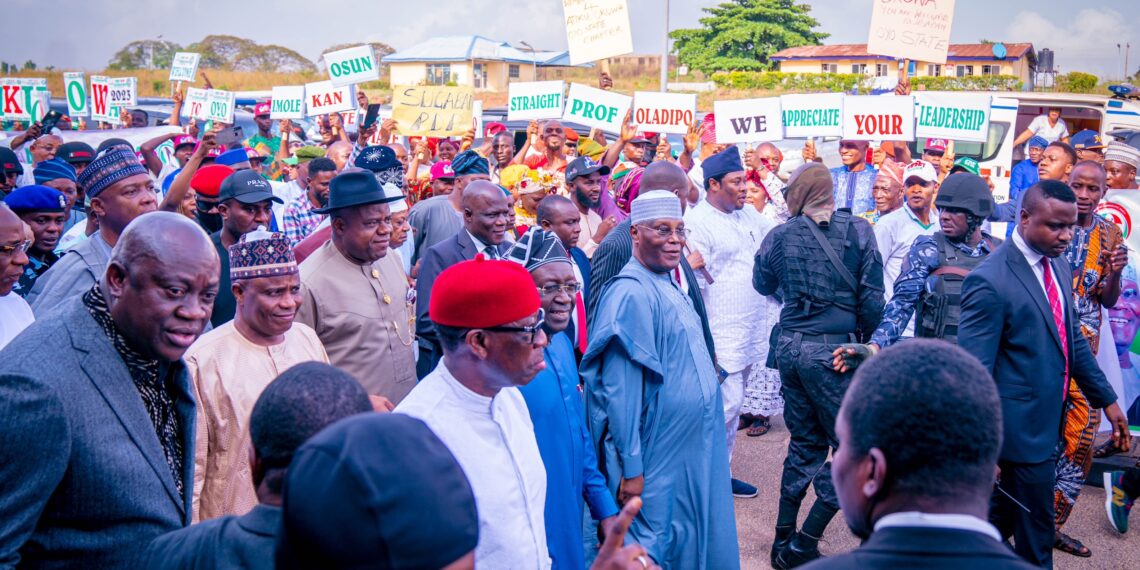 The swearing in of Ademola Adeleke on Sunday as the Osun State governor means the Peoples Democratic Party (PDP) now has two of the six governors in the South West geo-political zone.

Until Mr Adeleke defeated the incumbent Gboyega Oyetola of the All Progressives Congress (APC) in the July 16 governorship election, the main opposition party controlled only Oyo, which it had also reclaimed from the APC in the 2019 general election.

However, Mr Makinde is one of the five PDP governors, also known as the G5, involved in a rift with the party and its presidential candidate, Atiku Abubakar.

The governors have refused to campaign for the candidate, although they continue to work for the party in their states for the other seats being contested for in the 2023 general elections. Unless that rift is resolved, Mr Adeleke will only become a replacement for Governor Makinde and the field commander of the PDP in the South West, at least in the presidential election.

The region is strategic because it has the second largest volume of registered voters, after the North-west. Although four of the states in the zone are now governed by the APC, all but Lagos State have been ruled by PDP governors before, beginning from the 2003 elections when the then ruling party snatched five of the states from the defunct Alliance for Democracy (AD) party.

The zone is also considered an APC stronghold because its standard bearer, Bola Tinubu, a former governor of Lagos State, is from the zone.

Makinde and the G5

With the inauguration of Mr Adeleke, the PDP currently has 14 governors, while the APC has 21 governors. However, five of the PDP governors are involved in the rebellion against the party and Atiku. They are Nyesom Wike of Rivers, Okezie Ikpeazu of Abia, Samuel Ortom of Benue, Ifeanyi Ugwanyi of Enugu and Mr Makinde of Oyo.

The APC also has internal challenges. But the PDP seems to have more troubles as the G5 governors have refused to support Atiku, even declining nomination into his presidential campaign council. They have instead formed parallel PDP campaign councils in their states and refused to put the image of Atiku on campaign billboards, posters and vehicles.

The crisis in the PDP began at the party’s national convention in May where Atiku beat Mr Wike and 11 other aspirants in the presidential primary. Atiku was also the party’s candidate at the previous election in 2019. But his nomination this time came after the party suspended its power rotation policy that would have seen the ticket zoned to the southern region of the country.

The G5 governors, who recently renamed their camp as the Integrity Group at a meeting in Lagos, have been demanding the replacement of the party’s National Chairman, Iyorchia Ayu, who is from Benue State in the North Central zone, with a southerner.

They said this is to correct a “regional imbalance” in the PDP. Atiku is also a northerner from the North East zone and the dissident group insists their party cannot go into the election with its two topmost position held by northerners.

The national body of the PDP has, however, said it is not so easy to reshuffle its leadership, due to the provisions of the party’s constitution. It also said the time too is not appropriate for that, saying this should wait until after the elections next year.

In protest against the party’s decision on the issue, members of the group rejected their appointments into the PDP presidential campaign council and boycotted its inauguration.

They were also absent at the flag-off of the PDP presidential campaign in Uyo, Akwa Ibom State, and have continued to boycott activities organised by Atiku and the national leadership of the party.

The governors also stayed away from Mr Adeleke’s swearing-in in Osogbo on Sunday. Only Mr Makinde among them sent a representative, his deputy, to the event.

A pro Atiku group, Plateau for Atiku Movement, recently lambasted the governors over the crisis, saying they are not fighting in the interest of the party.

A leader of the group, Istifanus Mwansat, said changing the national chairmanship of the party would result in a deeper crisis and mar the party’s chances at the polls.

The pro-Atiku group also accusd the governors of holding the party hostage through their continued antagonism of the party’s candidate. Mr Mwansat added that the party has made enough reconciliatory efforts and sent various representations to Mr Wike and his group.

Mr Mwansat said his group was deeply concerned by the involvement of former Plateau governor, Jonah Jang, in the G5 group and insisted that the agitation of the group does not represent the thinking of party members in the North Central state.

The Plateau for Atiku Movement, therefore, called for a change in attitude and sheathing of swords in the interest of the party. It also called on the G5 governors and their supporters to embrace peace and work for the victory of PDP in all the elections.

In October, during an interview on a radio station in Ibadan, Mr Makinde said he would not support the party’s presidential candidate until the PDP ensures fairness.

With its only other southwest governor, Mr Makinde rejecting the aspiration of the flag bearer of the party, the newest governor of Osun may now become Atiku’s point man for the entire South West.

The Oyo governor should have taken that position, given that he is older in office and because his capital, Ibadan, was the headquarter of the defunct Western Region and the traditional political capital of the Yorubas.

Mr Adeleke has enjoyed the support of the party whenever he faced hard times in Osun State. The July 16 election was not an easy ride for the new governor.

The PDP was factionalised in the state before the election and Mr Adeleke faced stiff opposition from his opponents and other senior party leaders, including former Governor Olagunsoye Oyinlola, during and after the party’s primary.

One of his main opponents in the primay later defected to run against him in the general election on the platform of another party. But the national leadership of the PDP stood behind him through the storms.

Therefore, this may be payback time for the party and Atiku. Mr Adeleke currently enjoys a honeymoon with the Osun people. His personal popularity across the state was evident in his election.

The PDP is also strong in the state, benefitting from old political divisions in the state, dating back to the First Republic crisis between the late first premier of the Western Region, Obafemi Awolowo, and his estranged deputy and successor, Ladoke Akintola.

Mr Adeleke has also benefitted from the implosion of the APC in the state, arising from a face off between Mr Oyetola and his predecessor, Rauf Aregbesola. The latter, who is now the Minister of Interior, had accused Mr Oyetola of betrayal for jettisoning his controversial legacy programmes and denying his followers appointment and patronage.

The minister tried to stop the nomination of the governor at the primary but failed embarrassingly, following which his group vowed to wait for the governor at the general election. That crisis contributed to the defeat of the APC, more so that Mr Oyetola’s narrow victory in 2018 was also controversial.

Mr Adeleke believed he was cheated in that election, which was decided by a run off called by INEC after the PDP candidate came first but with a narrower margin than the number of registered voters in some units where the election could not hold.

These factors, as well as Mr Adeleke’s new position as governor, may work in favour of Atiku in Osun during the presidential contest on 25 February, 2023. Osun State has 1,955,657 registered voters. Before his inauguration, Mr Adeleke had started campaigning for his party’s presidential candidate.

Speaking in Osogbo while inaugurating the party’s campaign committee led by Sunday Bisi in October, the “dancing Senator”, as he was popularly known in the state, said Nigeria needs the PDP candidate as president, going by the content and quality of his manifestos.

He said, “Nigeria needs an Atiku presidency because he has the most updated, relevant, and responsive manifesto among all presidential contenders. His plan for Nigeria fits into the aspirations of Osun people for restructuring of the Federation, for local government autonomy, for anti-corruption, for better infrastructure, for national unity in diversity and for good governance.“

Mr Adeleke will also have to support the party’s efforts in the four other states in the region still in the hands of the APC. These are Lagos, Ogun, Ondo and Ekiti, all of which were previously led by PDP governors. It remains to be seen, however, how much impact he can make in that respect within the three months before the presidential poll.