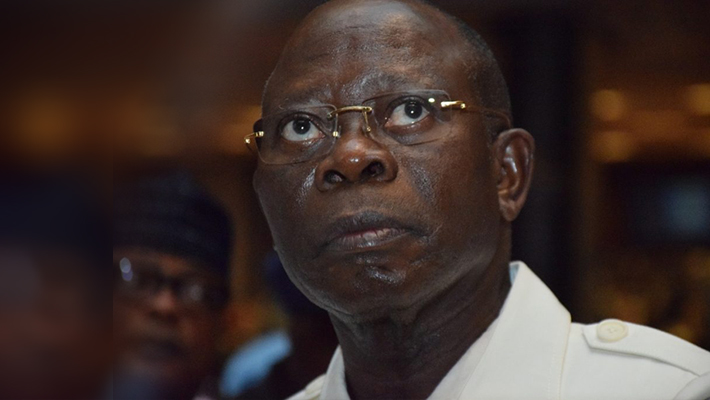 Adams Oshiomhole, the former governor of Edo state, has been named by popular political thug, Tony Kabaka, as sponsoring and encouraging cult violence in a bid to enforce political power.

“So Oshiomhole did it for me, I was nothing before,” Mr Kabaka said in the video, adding that “Cultism still exists because the government is involved.”

This development follows the release of a documentary by the British Broadcasting Corporation (BBC), focusing on the Black Axe Confraternity, aka Aiye.

The reports show the relationship between the brute cult group and its legal organisation, the Neo Black Movement of Africa.

In the hour long video uploaded to YouTube, the BBC explores the roots and origins of the cult group which was to fight oppression and push for students rights, with no idea this would turn into a catastrophe.

Mr Kabaka admitted his close relationship with politicians and most especially Mr Oshiomhole. He confirmed to the BBC that politicians use him and other cult figures as muscle during elections.

The report also brings up hacked emails from 2012, at the time where Mr Oshiomhole won the gubernatorial election for his second term in office for the Action Congress of Nigeria, revealing how N35 million naira had been sent by multiple political figures to bank accounts held by the Neo Black Movement ahead of an election campaign.

The report noted that in exchange for their services, a total of 80 political offices and roles had been promised to the members of the cult group.

At the time of filing this report, efforts to reach Mr Oshiomhole for comments over his involvement with the activities of the Black Axe proved abortive as his spokesperson did not respond to calls and messages.

The activities of the Black Axe movement have garnered the attention of security personnel in the country and abroad.

In 2020, Udom Emmanuel, the governor of Akwa Ibom state, ordered that “cults, societies and groups”, including the Black Axe, “are hereby declared unlawful”.

In July, the Nigeria Police warned hoodlums or cult groups that had planned to celebrate the Black Axe Day.

In October, the US Secret Service said in a statement that an investigation conducted with the FBI led to federal charges related to internet scams against seven leaders of the Cape Town Zone of the Neo Black Movement of Africa.

Eight men, all from Nigeria, were charged with wire fraud, money laundering and other crimes in connection with perpetrating romance scams and other illegal schemes perpetrated on victims in the US and other countries between 2011 and 2021.