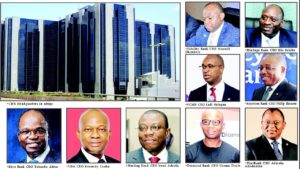 It is not always that the Central Bank of Nigeria (CBN) on   banks and other financial institutions. But on Tuesday, the apex bank wielded the big stick against nine banks for failing to remit $2.274 billion belonging to the Nigeria National Petroleum Corporation (NNPC) into the Treasury Single Account (TSA) as required by regulation. COLLINS NWEZE takes feedback from the lenders and examines the implications on their interactions with foreign exchange customers.

BARELY 24 hours after the apex bank announced the suspension of nine banks from Foreign Exchange (forex) market transactions for violating the rules of the game, the management of the affected banks yesterday rose to clear their names.

Their reaction was to save them form the risk of losing priced customers with interest in forex transactions, especially those needing to establish Letters of Credit (LCs) or meet foreign obligations in the coming weeks. No thanks to the indictment by the Central Bank of Nigeria (CBN) that nine of the 22 commercial banks breached forex regulations.

An LC is a letter issued by a bank to another bank (especially one in a different country) to serve as a guarantee for payments made to a specified person under specific conditions.

The CBN has a mandate to administer the Banks and Other Financial Institutions (BOFI) Act (1991) as amended. Its sole aim is to ensure high standards of banking practice and financial stability.

This role is achieved through the apex bank’s surveillance activities, as well as the promotion of an efficient payment system. The CBN mandate is derived from the 1958 Act of Parliament, as amended in 2007.

The Act charges the bank with the overall control and administration of the monetary and financial sector policies of the Federal Government.

On Tuesday, the CBN disclosed the identities of the nine deposit money banks (DMBs) that were allegedly hiding over $2.274 billion belonging to the Nigerian National Petroleum Corporation (NNPC) from the Treasury Single Account (TSA).

The Nation learnt that many of the customers of the defaulting banks have been moving to lenders that have the capacity to access CBN’s funds for LCs transactions as they will be constrained in establishing new LCs until the resolution of the issue.

Former Executive Director, Keystone Bank Limited, Richard Obire, said since the affected lenders will not be able to access forex sold by the CBN, it is expected that their prime customers, with significant interest in forex transactions, will have to seek alternative funding from other lenders.

He said the grave implication of staying away from the interbank market for a long time implies that the affected banks may have to pay up quickly, but will have to face further CBN sanctions, that may include fines.

Obire explained that in the interim, there will be loss of revenues for the banks in terms of profits that come from forex spread. Besides, the affected banks will also face further sanctions and penalties from the apex bank as stipulated in the forex guidelines.

“In the short term, loss of revenues for the banks is likely. They will lose forex spread and the CBN will penalize them, when they return the funds. But I think the banks will overcome it quickly. But they will suffer reputational or brand damage,” he said.

However, some of the banks responded yesterday to the forex indictment by the CBN. The FBN said it has been  complying with the TSA policy requirements in line with the Federal Government’s directive and that it will continue to remit funds received as and when due.

In a statement, the bank said: “It is pertinent to state here that the referenced NNPC dollar accounts are fully disclosed to the CBN and are being operated in line with the regulatory requirements, whilst tripartite documented discussions have been ongoing between the CBN, NNPC and the Bank on the need for domestic retention of those balances as part of measures to ameliorate challenges posed by the lack of forex availability, and customers inability to source FX to fund their trade finance obligations to the bank.”

The bank reassured its stakeholders that the issue is not a function of concealment or willful non-compliance. “We are confident in our ability to meet and honour all our obligations as and when due and are currently in talks with the CBN and other relevant bodies and are positive of an amicable resolution soonest,” the statement said.

In its own reaction, the First City Monument Bank Plc (FCMB) said its suspension by the CBN is based on the Treasury Single Account Directive, which stops banks from holding funds on behalf of government entities and instead, make daily remittances to the CBN. For our bank, this scenario is based on our non-payment/transfer of the remaining $125 million NNPC fund with us to TSA.

It said: “As a financial institution with strong corporate governance rules, we have always fully disclosed the outstanding TSA funds in our books and have continued to work assiduously to fulfill our outstanding obligations.

“The members of the NNPC Management Team have been kept fully in the picture on the funds. This development is really because of lack of foreign exchange availability and the prevailing fall in oil prices rather than concealment or willful non-compliance by FCMB. It is actually a widespread industry issue.

“In conjunction with the other institutions, we are working closely with the Central Bank of Nigeria for an amicable and mutually beneficial resolution of this scenario.  As an institution, our fundamentals remain strong, our franchise is still growing and we remain firmly committed to our professional values.”

The Diamond Bank Plc also reassured its customers of enhanced quality service delivery and commitment to meet its banking obligations despite the CBN announcement that the bank and eight others have been barred from foreign exchange transactions for alleged infringement on the TSA directive issued by the Federal Government last year.

In a statement, the bank explained that “as a financial institution built on a foundation of sound corporate governance, full disclosure of the outstanding TSA funds were made to the CBN.

“We are currently engaging with relevant stakeholders, with the support of the regulator, to resolve this industry-wide issue quickly.

“Our primary responsibility is to our customers. This development does not affect customers own deposits, both local and those in foreign currency./ It also means that services such as payments – local and international, will go through as normal whenever our customers need to make them./

“Remittance service will continue as normal and customers can transact anywhere in the world, any time of the day, on their mobile application or internet banking.”

In the same vein, the management of Keystone Bank Limited, said: “Our attention has been drawn to media publications to the effect that the CBN has excluded some banks including, Keystone Bank Limited (Keystone) from further participation in the Foreign Exchange Market until the issue of non-remittance of funds belonging to the Nigerian National Petroleum Corporation (NNPC) to the Treasury Single Account (TSA) is resolved.

“We wish to assure you that Keystone has always made full disclosure of outstanding TSA Funds, and had at various times diligently engaged the CBN and relevant stakeholders for resolutions to enable the bank fulfill the TSA obligations in the face of challenging market conditions.

“All our efforts are geared towards very timely resolution as we understand the importance of sourcing foreign exchange for our customers’ needs to support economic growth.”

The bank noted that this development does not adversely affect customers’ existing transactions with it, except that there will be constraints in establishing new LCs until the issue is resolved.

It assured its customers: “We enjoin you, therefore, to continue to patronise Keystone as we remain committed to rendering exceptional service on all our other banking products including best rates on deposits, visa card products, electronic banking and mobile banking transfers among others.”

But the UBA Plc, one of the affected banks, yesterday, said it has been readmitted into the forex market after remitting the fund.

“We are pleased to inform our valued customers, stakeholders and business partners as well as the general public that the CBN has re-admitted us into the Foreign Exchange Market following our remittance of all NNPC/NLNG dollar deposits. UBA wishes to thank you all for your continued support and patronage,” the bank said.

Confirming UBA’s position, CBN Director, Banking Supervision, Tokunbo Martins, said in a statement that the lender has been cleared.

Reacting, Sterling Bank Plc said: “We consider it necessary to respond to news reports of the suspension from the interbank FX market of nine commercial banks (Sterling Bank included) as widely reported in various media in the last 24 hours.

“According to these accounts, the suspension arose from a failure to disclose and remit certain balances held under the TSA on behalf of an agency of the Federal Government of Nigeria. In order to set the records straight, Management wishes to clarify as follows”.

The bank rejected the claim that it failed or neglected to disclose at any time, any sum held on behalf of its clients to the regulatory authorities as such balances were fully captured in the relevant regulatory returns.

It said: “In actual fact, the bank affirms that it went beyond this basic requirement of disclosure and reporting to holding several meetings with the parties involved; while the current situation is a broader sector issue arising from the foreign currency illiquidity in the domestic banking sector, Sterling Bank continues to work with its client and the banking regulator to resolve the situation in the shortest possible time”.

The bank said it had at all times, reported the balances involved to the CBN and at no time concealed or refused to remit the funds as documented in several written correspondences.

“Arising from our continuing efforts in this regard, we have reduced the outstanding sum to the current level within a very short period. As an institution built on the core values of integrity and sound corporate governance, Sterling Bank has always complied with all regulatory and other operating requirements and the TSA regulation is no exception to this proud record,” it said.