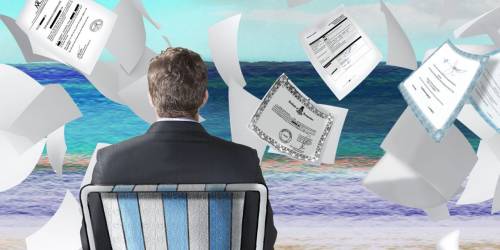 In April of last year, a massive list of persons hiding funds in small states in order to evade taxes in their home countries was leaked to news wires across the globe.

In Iceland, angry citizens took over the streets barely hours after it was revealed that their prime minister, Sigmundur Davíð Gunnlaugsson, was implicated in the Panama Papers for tax evasion. They demanded his resignation and the dissolution of the parliament he led.

He resigned only two hours after the news of his financial crimes broke.

The 41-year-old Mr. Gunnlaugsson was perhaps the first casualty of the weight of exposure made possible through decades of information contained in the pages of the Panama Papers.

Apart from the Icelandic prime minister who resigned, over 100 tax cases were reviewed and 46 cases of potential cases of tax evasion were referred to prosecutors in Iceland.

In Canada, 85 Canadians identified in the Panama Papers leak were investigated for tax evasion, the Canada Revenue Agency (CRA) revealed at the time. CRA spokesperson Jelica Zdero confirmed that “the CRA will ensure that all Canadian taxpayers identified from the Panama Papers are pursued.”

Other countries and government establishments also launched investigations into the offshore dealings of their citizens and staff named in the paper. According to the International Consortium for Investigative Journalism (ICIJ), “at least 150 inquiries, audits or investigations into Panama Papers revelations have been announced in 79 countries around the world.” These actions by different governments have led to the realization of over $110 million worth of unpaid taxes.

Financial Review, on September 6, 2016, reported that the Australian Federal Police seized 170 kilograms of silver bullion and coins worth $150,000. The seizure came about through deliberately scrutinizing the contents and following trails from the Panama Papers.

Through the daunting revelations made by ICIJ and the other media partners that poured into the Panama Papers, India launched what is considered till date as the country’s largest tax fraud investigation.

Seven months after the Panama Papers were published, “the probe into alleged tax violations by Indians named in the global expose has become the largest offshore inquiry initiated in the country. So far, 415 Indians are under scrutiny as part of the Panama Papers probe,” Indian Express reported on November 15, 2016.

Governments of many countries mentioned in the Panama leak used the report to recover taxes. In Colombia and Slovenia, over $80 million and $1 million were recouped, respectively.  In the United Kingdom, more than 22 people had been investigated by Her Majesty’s Revenue and Customs (HMRC) while 43 wealthy individuals came under review in relation to the Panama Papers.

Rob Palmer, the campaign leader on money laundering at the anti-corruption organization Global Witness, put it in perspective when he said, “it’s really important that you go after the pinstripe army of bankers, accountants and lawyers that make all of this [tax evasion] stuff possible.”

Moreso, the leak prompted leaders of nations to propose new laws and regulations that would make offshore trading more difficult and ease the processes of moving money in and out of their countries. A few weeks after the leak, the Barack Obama-led U.S. government, for example, unveiled a series of new regulations to crack down on illicit offshore financial transactions.

The ICIJ also said, “in October, following revelations from the Panama Papers that some former and current government officials held offshore companies, Mongolia’s parliament debated a bill to penalize politicians and public servants who do not declare offshore financial interests.”

Serious governments also studied the Panama Papers and were able to detect organized crimes and other criminalities. Law enforcement agencies in Europe were able to trace 116 projects on Islamic terrorism, for instance.

Europol’s head of financial intelligence, Simon Riondet, said, “The main point here is that we can link companies from the Panama Papers leak not only with economic crimes like money laundering but also with terrorism, organized crime groups, drug trafficking, human trafficking, illegal immigration, [and] cybercrime.”

The leak of the 1.4-terabyte financial data dubbed the Paradise Papers has elicited various reactions from some of the countries that have been mentioned in the leak so far.

U.S. Congress has been buzzing with demands to look into the allegations in the Paradise Papers. Calls are being made on the country’s legislature to investigate multinationals, financial institutions and members of President Donald Trump’s administration to discover whether they have been involved in tax evasion schemes.

“The Paradise Papers reveal how corporations, billionaires and senior officials in the Trump administration use complicated financial maneuvers to hide their income from the Internal Revenue Service,,” Mr. Sanders wrote in a letter to the Senate Budget Committee.

There have been cries for an inquiry into Commerce Secretary Wilbur Ross’ business dealings that are linked to Vladimir Putin’s son-in-law. Pressure has been mounting on Mr. Ross to sever his business ties with the Kremlin’s inner circle, since they were revealed in the Paradise Papers.

A few days after the leak made news, Forbes reported that it had taken Mr. Ross off its list of the 400 wealthiest Americans. The magazine was not clear on why it made the decision, but the announcement was made only two days after Mr. Ross’ name was linked to the Russians.

Furthermore, Mr. Ross has declared that he would sell his shares in the shipping company that earns millions of dollars from an energy company whose key owners include Russian President Vladimir Putin’s son-in-law and two Russian oligarchies.

In addition to the growing call for probes in the U.S., Justin Trudeau, the Canadian Prime Minister also said all Canadians named in the Paradise Paper would be investigated.

In Nigeria, It’s Business As Usual

Many countries whose citizens and public officials were named either in the Panama or Paradise Papers have launched series of investigations against those indicted. While some have improved on their tax policies, others have called out and forced some of their leaders to resign.

However, the Nigerian government has remained silent. It has not shown any will to either investigate the allegations or punish anyone who has been indicted.

In the Panama exposure, it was reported that about 110 wealthy Nigerian elites and companies were involved in the tax scandal. On the inglorious list was Senate President Bukola Saraki and his wife, Senator David Mark, Senator Andy Uba, Senator David Umaru, and Senator Ibrahim Gobir, among other prominent Nigerians.

Despite the call from pressure groups for the government to investigate those indicted in the offshore tax evasion deals, 19 months later, there have been no consequences.

In August 2016, the presidency, speaking through the Code of Conduct Bureau, claimed that it had started investigation of present and past government officials linked to the scandal. But one year and seven months later, there have been no convictions or exonerations.

The same pattern has begun to take shape with the recent leak of the Paradise Papers. Again, the Nigerian government has paid no more than lip service to the revelations made by the leak. While financial experts and lawyers have come out to say that tax avoidance is not a crime, they have also agreed that it is an offense to evade tax. Also, the Nigerian constitution mandates public officials to disclose their properties and anything contrary is regarded as violation of the law.

The Icelandic prime minister who was pressured to resign from office because of the Panama Papers exposure was in a similar state as the Senate President of Nigeria. Like Mr. Saraki, Mr. Gunnlaugsson claimed he broke no law by setting up a company in Bahamas but he resigned because the said company was not declared to the public when he took office. In Nigeria, the Senate President failed to disclose his companies but cares naught for resignation or vindication.

In an interview with SaharaReporters, Dapo Olorunyomi, whose media house, Premium Times, broke the news on both leaks in Nigeria, said Nigeria is the only country where the after effects and consequences of the exposure from the Panama Papers led to no ripples.

He also mentioned that no enforcement agency in Nigeria has approached his media house for information about those indicted in the Paradise Papers. Not only did he express concern for the way the exposures held no consequences for the people indicted, he also expressed lack of confidence that the current government would ever hold anyone accountable.

The Minister of Finance, Kemi Adeosun, however, has said the federal government would probe all government officials mentioned in the Paradise Papers but it may not lead to repentance from past practices. Former Chairman of the Code of Conduct Bureau (CCB), Sam Saba, once said the presidency would probe people listed in the Panama Papers.

Over a year later, however, it is still business as usual in Nigeria.