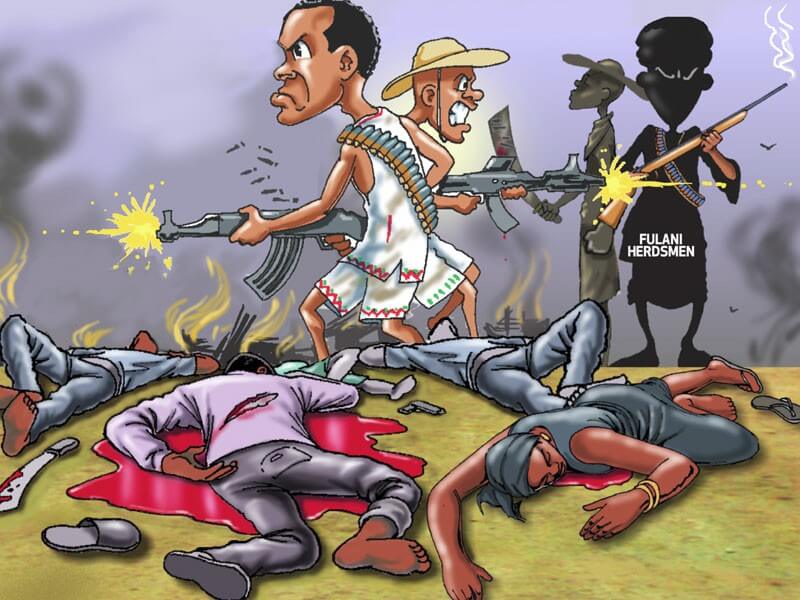 THISDAY reliably gathered that the herdsmen invaded  two Tivs settlement, one in Ilai, the outskirts of Mopamuro, and the other in Ido-Gbede of Ijumu Local Government Area of Kogi State at about 4a.m. yesterday.

A source close to the two local government areas told THISDAY that the herdsmen, numbering over 50, invaded the two communities, heavily armed with AK47 rifles.

They equally damaged goods worth several millions of naira and also stole some foodstuffs from both communities during the attacks.
Some of the victims in a phone chat with THISDAY said they were surprised that the Fulani herdsmen attacked them.

According to the victims,  the herdsmen invaded the communities at about 4a.m., and immediately they arrived, in the area,  they started shooting sporadically which made people to run for their lives.

They disclosed further that 10 persons were killed during the attack on the two communities, stressing that the Fulani herdsmen were fully armed with dangerous weapons such as AK47 riflrs, cutlasses, axes among others.

Meanwhile, the Administrator of Mopamuro Local Government Area, Hon Moses Sunday David, has condemned the attack.
Reacting yesterday,  he said: “I am surprised that the attack came barely a week after we had a peace and security meeting at the Elulu’s palace to forestall this kind of unfortunate occurrence.”

In a prompt on-the-spot assessment of the damage, the administrator in company of Alhaji Taofik Isah, Administrator Ijumu Local Government Area and ALGON Chairman, said: “We shall work with the security agencies to see that we rejig security architecture to ensure that people and properties are safe.”

David said he had contacted relevant government agencies immediately as he assured the people of the readiness of government to see that the menace become a thing of the past.

However,  the Police Public Relations Officer of the state police command,  Mr. William Ayah, when contacted on the attack, said the command was yet to receive any report from the two communities, adding that he was not aware of the incident.

Meanwhile, the  Federal Secretariat in Abuja was yesterday locked down  after another protest march by the members of the Islamic Movement of Nigeria (IMN)  otherwise known as the Shiite Movement yesterday turned violent.

In the ensuing commotion which began about 1p.m., two protesters were feared dead after they were struck by police bullets.
The clashes forced civil servants and other people at the scene to beat a retreat into several offices and the large car park at the Eagles Square.

The members of the Shiite sect, drawn from many parts of the country, are asking the government to release their spiritual leader, Ibrahim El-Zakzaky, who has been held since December 2015.
Initially, the procession was peaceful with the policemen in tow.
The group, chorusing anti-government songs, marched from Shehu Shagari road through Head of Service Complex, Ministry of  Foreign Affairs, down to Ahmadu Bello Way.

But in a sudden fit of spark, it turned violent, with the protesters and security operatives in open confrontation.
The Shiite sect lobbed rocks and damaged many police vehicles, while the latter responded with bust of tear gas shots.

The two fatal incidents occurred along Shehu Shagari road and Ahmadu Bello Way, very close to the Ministry of Health building.
The police subsequently reinforced and gained the upper hand after using hot water to disperse the rioters.

Boulders and exhausted shells of tear gas cannisters littered the roads adjoining the Eagles Square.
Though the scope of the riot was a child’s play in comparison to one that happened on April 16, it nevertheless aroused a cause for concern.

Policemen and officers of the Nigerian Security and Civil Defence Corps attached to the Federal Secretariat complex were vigilant, so that the riot would not descent into arson and destruction of public assets.
Also, the road leading to the Presidential Villa was blocked until the tension was doused around 2p.m.
Meaanwhile, Chief of Army Staff (COAS), Lt-Gen. Tukur Buratai, yesterday charged troops to end the wanton killings and destruction of property in the axis within three weeks.

Speaking when he flagged-off the 2 Battalion Forward Operation Base (FOB) at the Birnin-Gwari axis of Kaduna State, he directed the troops to go after the bandits and wipe them out.
The army chief said: “We are no longer going to adopt the defensive approach, it must be offensive. Since the battle has been brought to you, you must take it back and crush them wherever they are.

“The killings must stop, the wanton destructions of properties must stop, not only within Kaduna state but across the country.
“In the next two, three weeks, there must be a very resounding results that will bring these criminals to their kneels finally.

“They are not coming from the moon, or coming from outer space, they are within this territory. I don’t know why you cannot go to where they are and get them fished out.

“Am happy with the initiative of the General Officer Commanding 1 Division and all the commanders for the new approach and I want to see a decisive result at the end of this operation.”

Buratai sais the commanders have briefed him of their challenges and promised that the authorities have already started addressing some of these challenges.

The COAS said the next deployment must commence immediately, adding that other areas of logistic support and their welfare would be provided for them.